My first attempt could’ve dropped a horse: it looked like a brick and was about as tasty. But like many baby boomers in the early ’70s, I was into organic gardening, soybean burgers (awful) and baking whole grain breads.

My eyes were opened and palette educated during an extended stay in London where I happened upon a granary bread – a whole grain bread made by a truly experienced craftsman. I loved it toasted and slathered in butter and honey and washed down with a sweet and milky tea. In fact, I was so smitten, I spent months trying to recreate its seed-filled texture and nutty flavor. I recently came upon typed evidence of one of my early attempts.

The next couple of decades were devoted to children and career, and it wasn’t until the early 2000’s that the baking bug bit again – hard. I’ve been chasing the holy grail ever since: the search for the perfect crust and crumb. Fortunately, the last 15 years has seen an explosion of bread-baking cookbooks to help us map the quest.

I’ve been baking two to four loaves of hearth breads every week for the last eight years. (There have been occasional binges of six to eight loaves on a weekend, but I try to control myself.)

I’ll often focus on a single technique for several months in an effort to master the rhythm and feel for the process, and then gladly share what I’ve learned with students at my farm house kitchen. 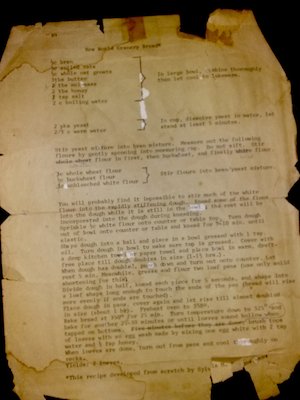 Just this past Christmas, I challenged myself to demonstrate a small handful of strategies to enable a busy man or woman to produce artisan breads in their home oven – no wood-fired oven needed.

I hope you enjoy this short slide show. I’ll be posting a teaching schedule in March.

What are you baking these days?

PS: I guess it’s no surprise that Dave and I found these crusty breads perfect with our grass-fed chili, roasts and rib eyes.