The restaurant, a project of MOTs Chef Russell and Desta Klein of St. Paul’s elegant and award-winning Meritage, is an homage to Chef Klein’s travels throughout Austria and Germany, and features food inspired by Northern Italy, Eastern France, Belgium, and Switzerland. The food and service are both high class — several of the chefs and servers came with Chef Klein from Meritage, and it shows.

I’m not going to drool over the foie gras on Brasserie Zentral’s menu as others have (I didn’t order it), although there was some to choose from on the lunch menu and several dishes with foie on the dinner menu. My loves on the lunch menu were the hand-made pasta, the expertly prepared vegetables, tender meats, and the luscious combinations of flavors. I was thrilled to learn that several of the dishes are a hat tip to Klein’s Jewish heritage — like holishkes (stuffed cabbage), whole roasted chicken served with kasha varnishkas, and the foie itself (which has a detailed Jewish history although the state of Israel actually bans its production and seems to be on track to ban its sale).

Within moments of sitting down, our knowledgeable and attentive server Chris presented us with a complimentary simple-but-satisfying taste of liptauer cheese and toasted bread — a little spice and crunch to prepare us for what would be an amazing series of dishes.

We first ordered a bowl of the White Asparagus Cream Soup with shaved green asparagus and hazelnut oil. I expected this to be heavy but was happily surprised to find it almost airy and soft, decadent, delicious, and utterly gorgeous. A perfect starter. 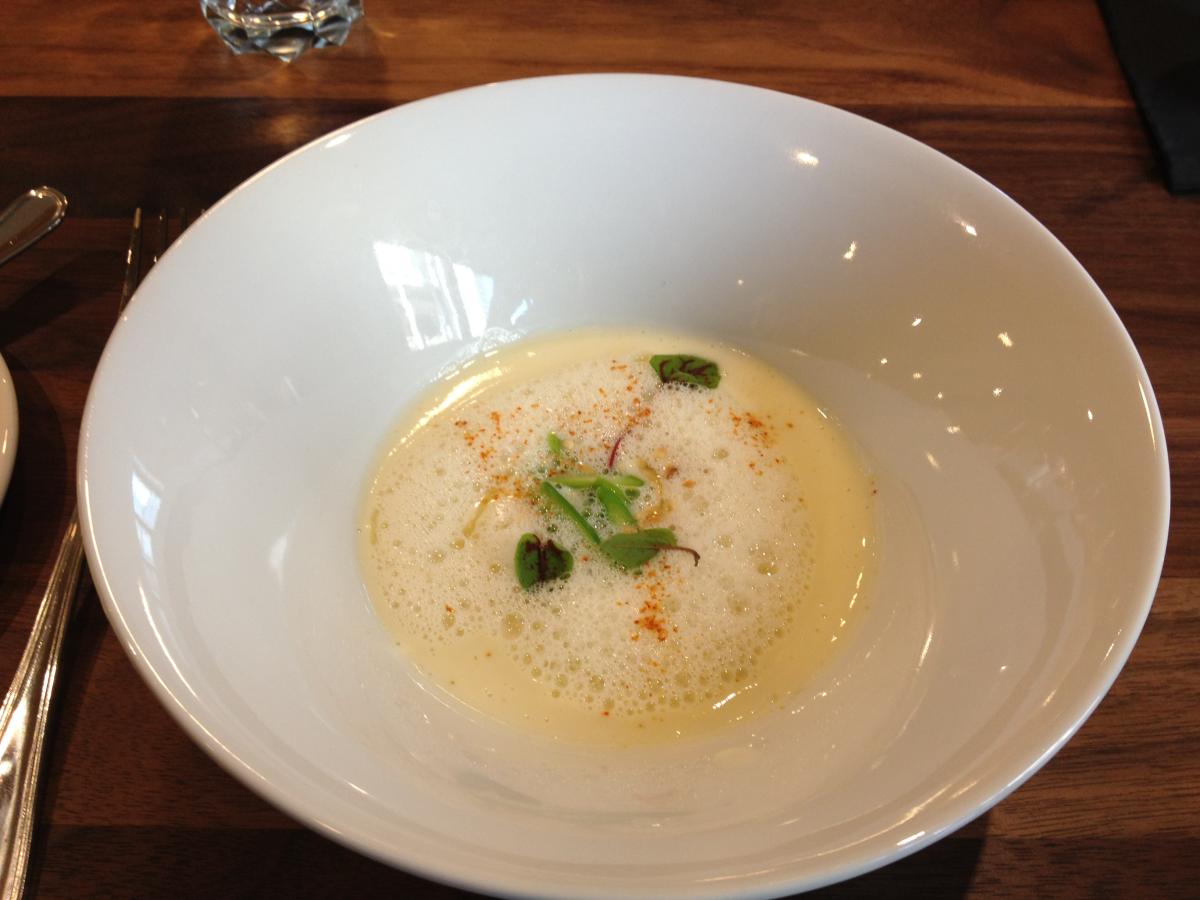 Next we shared the Quark Spaetzle, the most delicious upscale mac ‘n cheese you could imagine, which featured aged gruyere cheese, braised rabbit, peas, and chanterelle mushrooms. The dish was creamy but not heavy, the meat tender and flavorful, the peas a gentle, fresh addition to the inviting dish. Of course the pasta is handmade, and it just melted in your mouth. I could have eaten it by the bowl-full. 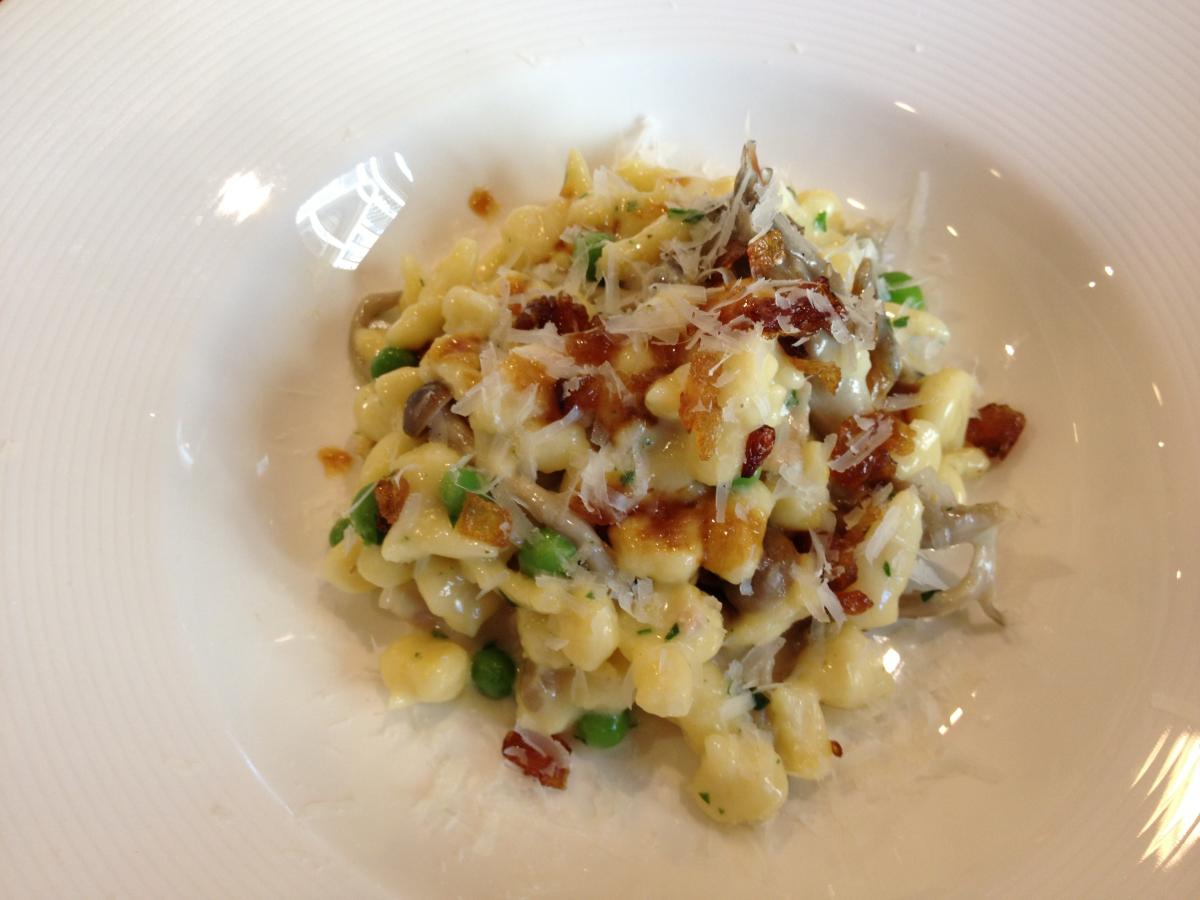 A fancy mac & cheese with rabbit and chanterelles – OMG….

Next we shared the Kavelierspitz, Austrian boiled beef shoulder with bone marrow, seasonal vegetables, potatoes, creamed spinach & apple-horseradish sauce. Unreal. The dish was served in a tureen of sorts, with a shallow broth highlighting the simple elegance of the meat that we just could not stop eating. The leeks and onions were a perfect compliment to the beef, as we shaped and savored bite after bite. I ate the horseradish plain – it was bitter yet also sweet, thanks to apples mixed in. It made me wish I could have eaten this at our Passover seder (Chef Klein could make a killing bottling it up for sale next year). The creamed spinach was flavorful but unnecessary in my humble opinion given the perfection of the dish without it. 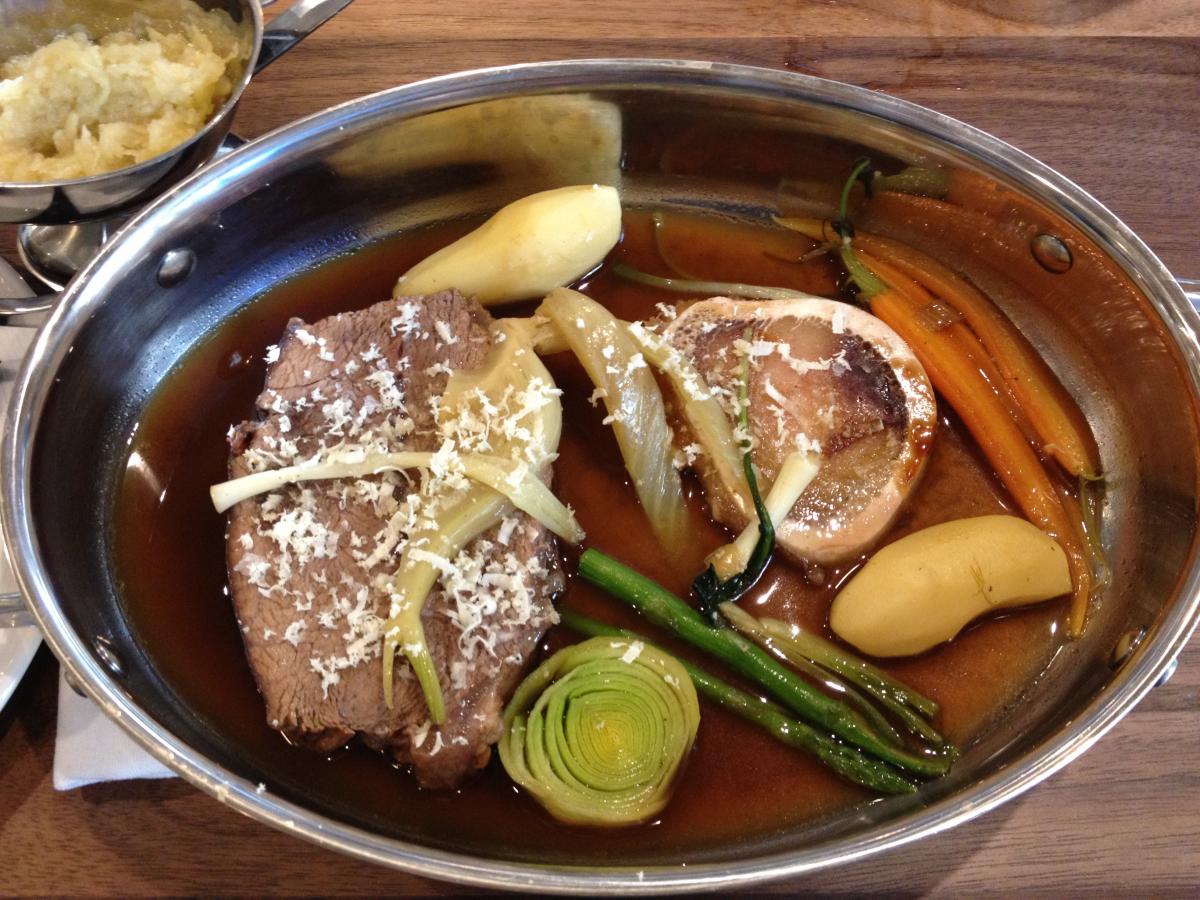 Beef, vegetables and savory goodness in every bite.

Dessert? We were tempted but way too full. Next time, I promise.

But it’s not just the food that sparkles at Brasserie Zentral, it’s the atmosphere, which is why as the buzz builds, it’s going to start taking customers away from the usual high-end lunch spots in the area like Mission and Bank. The dining room is lush without overwhelming, the music soft and European, and the servers welcoming beyond the norm even in downtown’s best. To top it off, the restaurant has an open kitchen and a half dozen or so seats in front of the action, which is where we sat and watched Chef Klein and his team prepare meal after glorious meal, kibbitzing about asparagus prepping techniques and life in the restaurant biz with the friendly line cook Adrian De Los Rios (most recently of Travail and the Rookery). 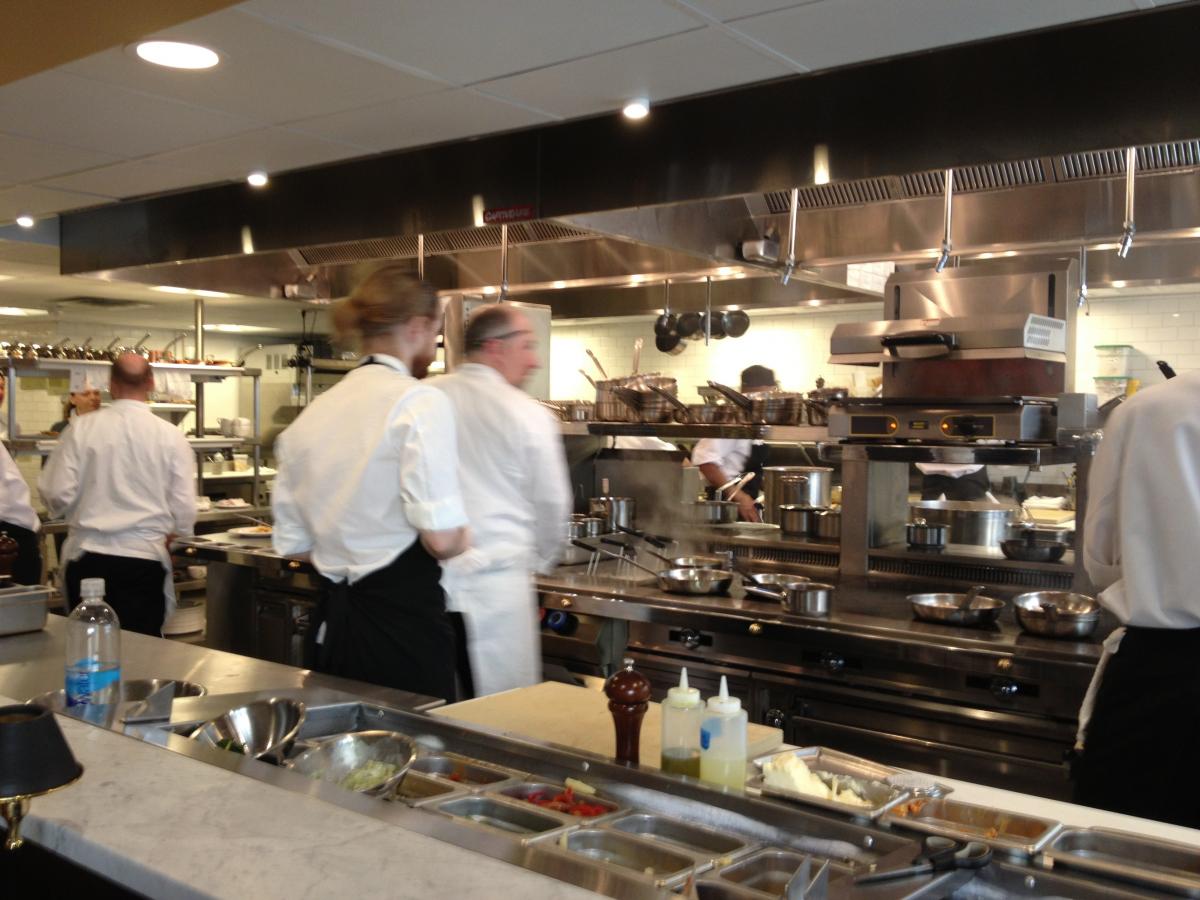 The kitchen, from our awesome seats. Chef Klein in action front and right.

My one complaint has a very good explanation. The bathroom is a bit of a walk outside of the main restaurant and into the Soo Line building lobby, a factor of dining there that is likely to annoy you until you understand that Brasserie Zentral is only one piece of a multi-layered restaurant feature. The full “Zentral Project” will extend into that same lobby and feature a lush wine bar called the Foreign Legion with fancy cheeses, a charcuterie, coravin wine access system, stunning handmade chandeliers, soft lighting and seating for up to 60 for private dining rental; a 2nd floor Skyway level cafe called “Cafe Zentral” with sandwiches and soups to go from 6-3; and a wine and spirits shop so you can take home what you taste. Complaint justified or no, the food and atmosphere make up for it a hundred times over.

I’ve already made reservations to dine here again next week, and encourage you to do the same. You’re likely to have a Chef Klein sighting while he is spending most of his time at Brasserie Zentral instead of Meritage as the restaurant finds its grove these next two weeks. Keep your eye out for the rest of the Zentral Project openings — Cafe Zentral will likely open in June, and the Foreign Legion Wine Bar opens for private dining this weekend and to the general public around Labor Day.

In the meantime, weigh in with your thoughts in the comments – what should I try from the lunch menu next week? And if you have dined there already, what did you think?