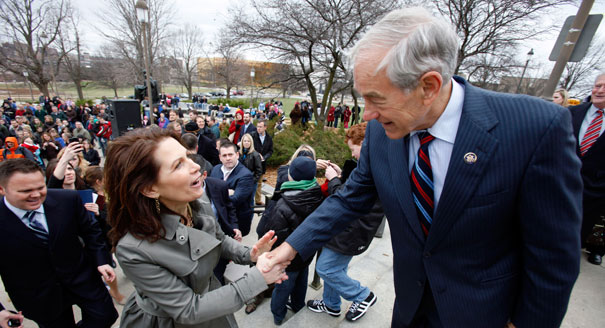 A beautiful young acquaintance, mother of three, mentioned me in a retweet this morning:

As a woman of a certain age–far closer to Bachmann’s age than that of my friend–my first thought upon hearing this news earlier in the week was “Here we going again” with focusing in on candidates’ appearance rather than their substance.

Not just the ladies

While it’s a greater issue for women running for office–witness the snark about Hilary Clinton, Margaret Anderson Kelliher and, more recently, Amy Koch–pretty isn’t just a problem for political ladies in a pop-driven culture.

Case in point: the 2006 congressional race in Southern Minnesota. I started Bluestem Prairie five years ago this month as a blog focused on the Tim Walz-Gil Gutknecht race, and one source of fodder in those early days was the traditional media’s unshakeable belief in the power of Gil Gutknecht’s perfect hair. So firm was this conviction that only one Twin Cities television station even bothered to dispatch a camera crew to Mankato to cover what turned out to be one of the nation’s biggest surprise upsets.

Since then, Walz has shed more hair while picking up a couple more terms.

A more recent example of gazing on male beauty in Minnesota politics is the attention given to Bachmann running buddy, aging toxic metal preacher Bradlee Dean (Bradley Dean Smith); the homophobic fashion victim cries about the injury here. Let’s face it: as someone who works his image for the Lord, he could use  a haircut and Marcus Bachmann’s help in a fashion makeover. Rachel Maddow and the gay agenda got nothing on middle-age itself as far as putting Mr. Smith’s public persona in a bad light.

My second thought on the news: Hell yes, girl. Lookin’ good! (except for the crazy eyes).

Brand Bachmann: the beauty of frugal

But in the long run, the expense of keeping up appearances undercuts the ethos Bachmann has set for herself in her current brand position. Not only has she talked up fiscal conservationism while running down dirty hippies and the gay, but she’s branded herself to her base as the frugal right-wing Mother Courage who clips coupons and wears second-hand clothes.

Bachmann welcomed the attention that writers like Kim Ode lavished on her style in Bachmann’s first term:

Far from distancing herself from the topic as frivolous, Bachmann reveled in the invitation to describe a style that’s determinedly feminine.

Over the past several years, her look has provided fodder for radio hosts, gossip columnists and bloggers. Some naysayers try to diminish her with descriptions such as “sexy” or “hot,” while one simpatico site good-naturedly swooned over her as “Senator Eye Candy.”

Doesn’t bother her. Election night’s foray into full-tilt glamor was ordained when she emerged from the dressing room to a “Wow,” in unison, from campaign spokeswoman Connie Slama and a girlfriend. When Bachmann, in her victory speech, vowed to “hit the ground running, even in high heels,” it was no empty promise.

But those articles always pitched an image of a bargain-shopping beauty, and Bachmann incorporated cheap chic into appeals to her base.

For Brand Bachmann has sold itself not only as fiscally prudent in policy, but as one in the woman’s personal life as well. In an April 2010 Tea Party speech reported by Fox News in Tea for Two: Partiers Bask in the Glow of Palin and Bachmann, she said:

“I am the chief coupon-clipper at our house,” she told a cheering crowd of 200 conservative activists outside the Minnesota state capitol. “Whoever balances the checkbook knows we gotta bring in at least a little bit more than what you put out.”

Bachmann went on to say that she and her husband, parents of five biological children (the same number as the Palins) as well as 23 foster children, “always bought used cars” and “clothes in consignment stores.”

“We’ve lived like all of you live because we balance the checkbook,” she boomed.

Perhaps the spotlight and nonstop scrutiny of the presidential campaign have convinced Bachmann of the need for pricey stylists. But will Bachmann’s $4,700 bill hurt her in the eyes of the fiscal conservative[s] who’ve taken to heart her message on spare spending?

This affront to her own carefully constructed ethos comes in the same week as couple of other headlines that would send a corporate marketing campaign scurrying back into the office on a lovely summer weekend like this.  AP reporter Brian Bakst’s Spouse standard shifts for Bachmann is one:

Republican Michele Bachmann says scrutiny of her husband is out of bounds as she seeks the Republican presidential nomination. But her rules have changed since she attacked Democrat Barack Obama over comments his wife made three years ago.

And Bakst doesn’t even venture into the Bachmanns’ contradictory but consistent pitching of Marcus Bachmann as an insider on her campaign, as Bluestem noted in Marcus in a respectable Republican cloth coat? Bachmann demands press not raise questions about her self-described strategist husband.

The Daily Caller also reported this week that Marcus got reimbursed for a lot of driving for an earlier congressional campaign so it’s not as if he was ever simply the self-sacrificing political man-wife, but a campaign disbursement (of course, Dump Bachmann noted this expense in 2007, but that was before rightside sites started with the brand erosion).

Then there’s the even more curious headline in yesterday’s Rochester Post Bulletin,Bachmann trying to broaden her appeal, in which we’re seeing this sort of thing:

Bachmann is clearly trying to make the leap from cable TV grenade-thrower. Although still defiantly opposing a hike in the nation’s debt ceiling, she is otherwise toning down her rhetoric — when discussing her anti-abortion views, she paused to say she didn’t mean to condemn women who have had an abortion. She made similar conciliatory remarks about Muslims and China, two targets this year of GOP campaigns.

And her campaign, too, is trying to convey the image of general election juggernaut rather than understaffed primary campaign. Her events tend to be lush — expensive and well-produced with professional lights and sound. They are also tightly managed: In Muscatine, a staffer kicked out a supporter of Texas Rep. Ron Paul who was subtly handing out a flier comparing their congressional records. . . .

It’s not so much a question of personal integrity here as brand integrity–and repositioning. Can Brand Bachmann–which once co-starred at a 2009 libertarian student rally at the U with Representative Paul–gain a greater market share in time to capture the 2012 Republican presidential nomination? Or will sales slump as Brand Bachmann moves out of its secure place in its current niche? And as the national Republican marketing teams–which heretofore have touted this product–drop the line?

Photo: There’s a whole lot of repositioning going on since Politico published this snapshot of Congresswoman Michele Bachmann and Ron Paul in Iowa in March.