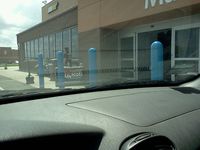 I suppose it shouldn’t surprise me that ‘You Can Run But You Can’t Hide Ministries’ is canvassing in front of the Anoka Walmart.

I was intrigued. On a day in which Congresswoman Michele Bachman was glitter-bombed by a LGBTQ ally protesting the Sixth District Republican’s close connections with Bradlee Dean’s anti-gay ministry, I was surprised to learn that a Street Team would be at any Walmart anywhere in the country.

So was Anthony Maki.

Reached by phone, Maki confirmed that he had seen two YCRBYCH Street Team members around 2:30 at the Coon Rapids Walmart, where he was picking up graduation pictures for a family member.

The young men at the Street Team table–cleary identified with a You Can Run But You Can’t Hide banner–were talking to a female Walmart customer about the CDs set out for distribution along with magazines and pamphlets. Maki said that he couldn’t say with any certainity that he saw a tip jar.

Maki didn’t take a picture at the time.

“As a gay man, I don’t feel comfortable being confrontational in situations like this,” Maki said.

Reached by phone, “Jeremy” in management at the store confirmed that the YCRBYCH Street Team was indeed in the parking lot today, but referred Bluestem to a corporate media office 800 number. BSP left a message.

What’s the surprise? First, back in May, Dean was condemned by nearly all of Minnesota’s leadership following an exclusionary prayer on the Minnesota House floor in which Dean also implied that President Obama was not a Christian. Three days later, Bluestem’s report on seeing a Dean Team in my local Walmart led to the Minneapolis City Pages inquiry about the fundraising.

CP reporter Nick Pinto reported in Bradlee Dean lied to Walmart about his church, is now banned from parking lot:

Now it turns out that not only is Dean permanently unwelcome in the state legislature — he’s also banned from the Walmart parking lot. . . .

Dean’s You Can Run But You Can’t Hide youth ministry was sighted yesterday hosting a fund-raising booth outside the Hutchinson Walmart.

We checked in with Walmart headquarters to ask if they knew they were playing host to a guy who says gay folks should be thrown in jail and has praised religious extremists who execute suspected homosexuals.

“They registered their request to solicit outside the store using a false name,” Hardie said. “As soon as we learned the group’s true identity, they were asked to leave.”

And just as Kurt Zellers promised “That type of person will never, ever be allowed on this House floor again,” Hardie said the ministry’s hateful message has earned them a permanent ban from operating on Walmart property.

“Due to their actions towards our customers, we will no longer allow them to solicit outside our stores,” Hardie said.

Will the Walmart ban be a setback for Dean? In his ministry’s tax filings, Dean claims that his “street teams” raised $446,126 last year, working six days a week. Some have wondered whether operations like the one in Hutchinson yesterday can possibly be pulling in $1,400 a day.

The City Pages report raises questions about why a Street Team was tabling at the Coon Rapids store. Does the retail giant need to improve internal communications about a public news report? Or has something changed since the City Pages contacted the corporation?

Photo: Bluestem’s picture from the Hutchinson Walmart in May.