At the RightOnline Conference last month in Minneapolis, Rep. Michele Bachmann became the third Republican presidential candidate to get glitter thrown on her by the “glitterati.” The reason? Her longtime relationship with Bradlee Dean, head of the You Can Run But You Cannot Hide International ministries. Dean’s invective towards Muslims, Democrats and especially the LGBT community has earned him notoriety in Minnesota politics, yet candidate Bachmann has yet to weigh in on her relationship with Dean. As Bachmann’s star rises in the GOP presidential field, the controversial pastor is likely to become a campaign issue in the months ahead, much the way President Barack Obama’s Rev. Jeremiah Wright was seized upon by conservative activists in 2008.

Candidate Obama’s pastor came under media scrutiny during the Democratic nominating process for some comments he made in his sermons. The attention forced Obama to speak out against his pastor and for Wright to resign from his position.

While arguably not as close as Obama’s and Wright’s relationship, Bachmann and Dean’s ties date back several years. In 2005, Bachmann, then a state senator, gave Dean’s ministry a letter of endorsement after Dean sent her a copy of his comic book, “My War.”

“Your work is a testament to the struggle our youth are facing in making the right choices in the face of controversy and peer pressure,” she wrote. “I commend you on writing this book for parents and youth alike.”

She was also a guest on the Dean’s “School of Hard Knocks Roxx,” a radio show on Christian station KKMS.

The following year and just before she won her first campaign for the U.S. House, Bachmann attended a fundraiser for You Can Run (YCR) and offered a lengthy prayer in which she referenced the “last days” and plead with God to increase the ministry’s reach ten-fold. Dean’s ministry had seen criticism for doing assemblies at public schools that some say violated the Constitution for using taxpayer dollars to fund overtly Christian endeavors. 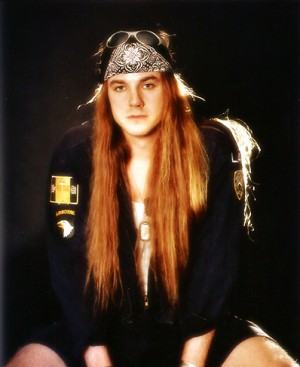 Bachmann would return to the ministry in 2009 as the headliner for its fundraising gala. But she appeared by video instead.

In a four-minute video message, Bachmann said, “I’d hoped to be there, but unfortunately the future that’s being forged here in Washington, DC … is one that saddles today’s youth with tremendous debt, a diminished world presence, and diminishes their God-given freedoms.”

She was in Washington preparing for her “House Call” on health care, a tea party event she and other Republican members of Congress paid for with taxpayer funds.

She praised You Can Run’s mission at YCR’s “Appeal to Heaven” gala. “It a tough job that you do, but someone has to do it. I thank God that he has given you the strength and the resolve to fight for our timeless values.”

And she reiterated her support for their work evangelizing in public schools. “We can’t overlook the outright rejection of God in the public school classroom, and the outright scorn of Christianity in our public square,” she said. “Moral relativism is exalted and faith in Christ is derided.”

Dean’s fiery preaching on his radio have garnered a lot of interest. In May 2010, he suggested that Muslim nations that execute gays and lesbians are “more moral” than American Christians.

“Muslims are calling for the executions of homosexuals in America,” Dean said during YCR’s May 15, 2010, radio show on AM 1280 the Patriot. “This just shows you they themselves are upholding the laws that are even in the Bible of the Judeo-Christian God, but they seem to be more moral than even the American Christians do, because these people are livid about enforcing their laws. They know homosexuality is an abomination.”

“If America won’t enforce the laws, God will raise up a foreign enemy to do just that,” Dean continued. “That is what you are seeing in America.”

He has called gays and lesbians predators and pedophiles. “The bottom line is this… they [homosexuals] play the victim when they are, in fact, the predator,” Dean said, before going on to make a claim that has no basis in fact: “On average, they molest 117 people before they’re found out. How many kids have been destroyed, how many adults have been destroyed because of crimes against nature?”

Dean has accused Rep. Keith Ellison of trying to overthrow the U.S. Constitution and claimed that Ellison, who is Muslim, is using the homosexual agenda to bring about Sharia law. He’s said that “homosexual activists” are going after children because, he charges, one in twenty homosexuals is a child molester. He said that Obama broke the law when he appointed a lesbian to be a U.S. Marshal.

Dean has repeatedly called for gays and lesbians to be put in prison. On the radio show in 2010, Dean’s co-leader Jake McMillian praised the actions of the African nation of Malawi, which had recently arrested a gay couple for getting engaged.

“They are very conservative,” he said. “They sentence people for crimes against nature.”

Dean added, “They are very moral; they uphold the laws.”

McMillian continued, “We have got countries all over the world that are standing for what’s right and what’s wrong. In Rwanda, there’s legislation right now that repeat offenders of homosexuality will spend their life in prison.” 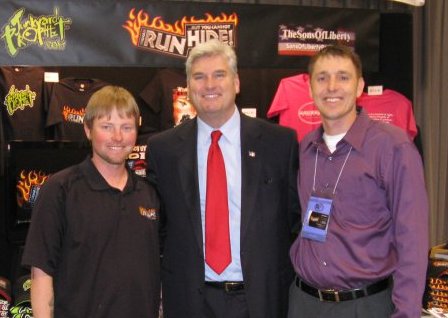 It began with Dean’s remarks on his radio show in the summer of 2010 that appeared to condone the morality of Muslim nations that execute gays and lesbians. His statements sparked uproar from may quarters, even those that view homosexuality as evil.

Exodus International, a group that advocates “ex-gay” therapy, a practice that has been discredited by most major medial groups, condemned Dean’s statement.

“Using Old Testament scriptures to condemn a person to death is not ‘loving’ … it is incomplete theology and powerfully irresponsible,” wrote Randy Thomas, the group’s spokesperson, at the time. “To say that murderous actions are more ‘moral’ than tolerating free will is to completely ignore that Jesus did not call for the deaths of sinners. He died and paid the price for all of our sin, including those of us who have or do struggle with homosexuality. I pray that Mr. Dean will correct his focus and reconsider the message he is choosing to proclaim.”

Mac Hammond’s Living Word Christian Center, the church that played host to Bachmann’s famous speech where she said that God told her to run for Congress, was moved to condemn its associations with Dean as well. LWCC hosted YCR for a youth program in 2009.

“LWCC does not support financially or in any other manner, nor is an affiliate ministry of You Can Run But You Cannot Hide Ministries,” the church said in a 2010 statement following Dean’s controversial statements. “Our faith community at LWCC believes it is the love of God who draws all men (people) to Him, not condemnation or judgment.”

The Minnesota Council on American-Islamic Relations condemned Dean’s words as well, saying the group “strongly opposes any kind of violence or discrimination against any group,” and called on Minnesota Republicans to speak out against Dean’s statement. Few, if any, did.

“The YCR representative makes at least three outrageous and incorrect claims in the radio interview,” CAIR-MN said in a statement. “That ‘Muslims are calling for the executions of homosexuals in America,’ that executing homosexuals is ‘moral,’ and that Muslims are a ‘foreign enemy.’ Statements like this show the level of ignorance and bigotry that exists in our country.” 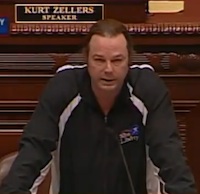 Left: Bradlee Dean, giving his May 20, 2011, invocation before the Minnesota House

But the peak of Dean’s time in the spotlight came in May 2011 when Republicans invited him to give the invocation before the Minnesota House.

Rep. Phyllis Kahn, DFL-Minneapolis, condemned his appearance. “Bradlee Dean has a long track record of hateful speech, and his intolerance has no place in the ‘people’s house.’ His presence sheds light on the true motivations of the anti gay marriage constitutional amendment groups. This isn’t about voter choice; it’s about systematic discrimination against a group of people.”

Republican Speaker of the House Kurt Zellers echoed those sentiments. “That type of person will never ever be allowed on this House floor again as long as I have the honor of serving as speaker,” he told his colleagues.

The Minnesota Legislature’s two openly gay and lesbian members took great offense to Dean being allowed to lead the House in prayer.

“In my 30 years in the House, I have never seen such a hateful person be allowed to deliver the opening prayer,” Rep. Karen Clark, DFL-Minneapolis, said.

“Mr. Dean has a long and well-known record of intolerance, something that should have no place in the legislature, let alone in a prayerful blessing,” said Sen. Scott Dibble, DFL-Minneapolis.

Others, including Minneapolis Mayor R.T. Rybak, the American Civil Liberties Union and the Minnesota Catholic Conference, among others, decried his prayer.

Even before the House prayer controversy, Dean’s words caused considerable stress for one man’s political campaign. Tom Emmer attended the same 2009 YCR fundraiser that Bachmann headlined, and his campaign gave funds to support the ministry.

Groups like the Human Rights Campaign launched campaigns to pressure Target to give money to pro-gay candidates, nationwide scrutiny came to Emmer’s campaign, boycotts were initiated, and Target’s CEO ended up apologizing to company employees for the donation. Throughout the controversy, Dean’s central role was not ignored, as this illustration for SFist’s story on the relationship shows:

Still, despite Dean’s ability to stir controversy, candidate Bachmann shows no sign of distancing from him. In fact, the two will be sharing a stage at Freedom Jamboree in September, a GOP nominating event hosted by tea party activists.

Bachmann’s campaign has repeatedly refused requests for comment about her relationship with Dean and You Can Run But You Cannot Hide.