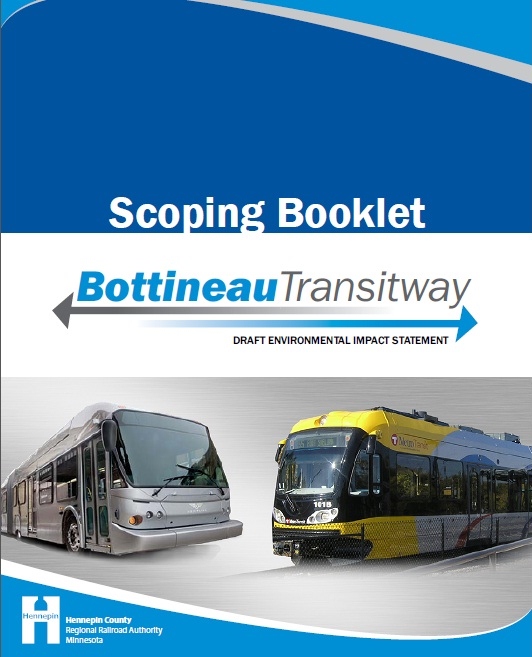 When I first heard that the proposed Bottineau LRT project released a scoping survey, I had to wonder what exactly “scoping” meant in this context. Since the project will likely 1) receive federal funding and 2) have a significant environmental impact, one of its requirements is for there to be a full environmental impact statement (EIS) to be drawn up. The EIS document consists of three phases: scoping, draft EIS, and final EIS. “Scoping” is the preliminary process to allow for public comment and input that will help form the content in the draft Environmental Impact Statement. Public input during the scoping process is encouraged.

In short, it’s the kind of thing Northern Metals should have done. There will be four public meetings to discuss the scoping aspect of the Bottineau Corridor. Those dates are in the report for anyone who can’t make it to one of the scheduled NoMi hearings. Monday January 23rd, 4:30 – 6:30 pm, at the Theo Wirth Chalet, 1301 Theo Wirth Parkway or Wednesday the 25th, 5:30 – 7:30 at UROC are the two choices. 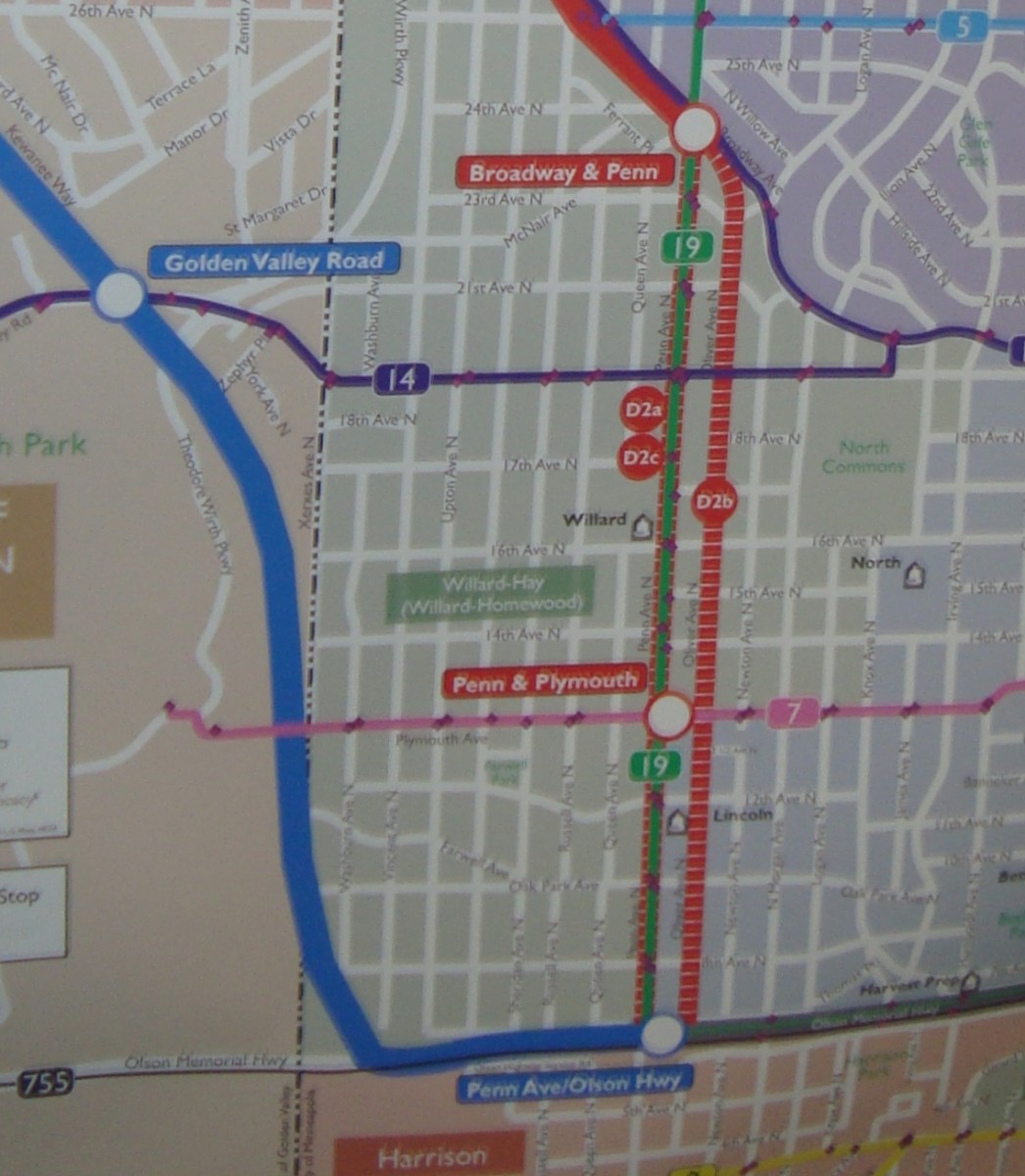 As for the report itself it will compare three things: light rail transit, bus rapid transit, and no project (i.e. no impact). The two routes being compared are D1 (going through Theo Wirth Park and down to Highway 55) and D2 C (down Broadway to Penn, then to downtown via 55). 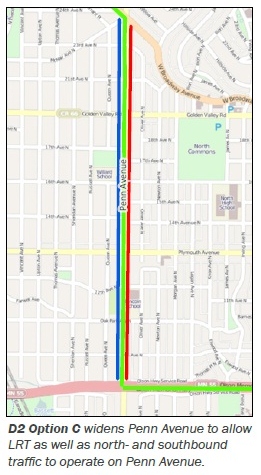 Now this is just my opinion, but they picked the absolute worst of the possible D2 alignments. Not that I think any D2 option will be better than D1, but D2 A would affect twenty-four properties along the corridor and D2 B would affect fifty-three. An affected property might need to be acquired and demolished, or it may only need to have part of its lot taken for LRT use. Under the D2 C alignment, 110 properties would be acquired. To quote from the Northside Transit Network, under D2 C, “all properties would likely be removed.” (meaning one of three options: demolished, lifted off the foundation and moved, or you know what? the hell with it, this is Minneapolis so let’s just demolish.)

When you line up the above map with some of the proposed Penn Avenue Redevelopment Plan maps, we start to see why the city has targeted quite a few properties along Penn – even though they’re not coming right out and saying so just yet.

That being said, if we’re going to do a major transit development here, I believe it has to be light rail instead of bus rapid transit. (My ideal configuration would be the D1 route, with streetcars along Broadway, and beefed-up busing on Penn and our east-west corridors.) People equate LRT, streetcars, and trains with an experience in and of itself. People don’t have the same associations with a bus route, no matter how fancy. If all we get is BRT out of this, we may as well not do the project at all.

Building nothing, though, does not appear to be a valid option. Our population growth exceeds our ability to address traffic congestion by freeway expansion alone. By 2030 or significantly sooner we’re going to need some fundamental upgrades to our transit corridors. Furthermore, while about 8% of Minneapolitans do not own a vehicle, 14% of those living along the proposed routes are without a car. In some parts of NoMi, that figure jumps to around 50%. Expanded transit options could be a lifeline for many in our community as a result.

There are three primary goals being used to evaluate the project during the scoping phase:

Goal 1: Enhance regional access to activity centers throughout the Twin Cities via connections to the emerging transitway system and the greater regional transit system.

Goal 3: Deveop the Bottineau Transitway as an integral component of a cost-effective and financially feasible transit system.

If those three are met, there is a secondary set of criteria used in evaluation:

With that in mind, what is the criteria being used to weigh our public comments?

Environmental justice: Effects of the proposed alternatives on minority and low-income populations and communities.

Parks and public land (Section 4(f) and 6(f)): Effects on publicly owned parks and recreation lands within the project area.

Secondary impacts to be included for consideration are:

A draft Environmental Impact Statement is expected to be finished within twelve months, and the scoping project closes on February 17, 2012. All public comment should be directed to Brent Rusco and must be received before that date.

For those impacted by the city’s plan along Penn, keep in mind that the public comment period for that plan ends one month before the very first initial Bottineau comment period finishes. To be safe, people living along the proposed corridor should get their comments in to both entities sooner rather than later.