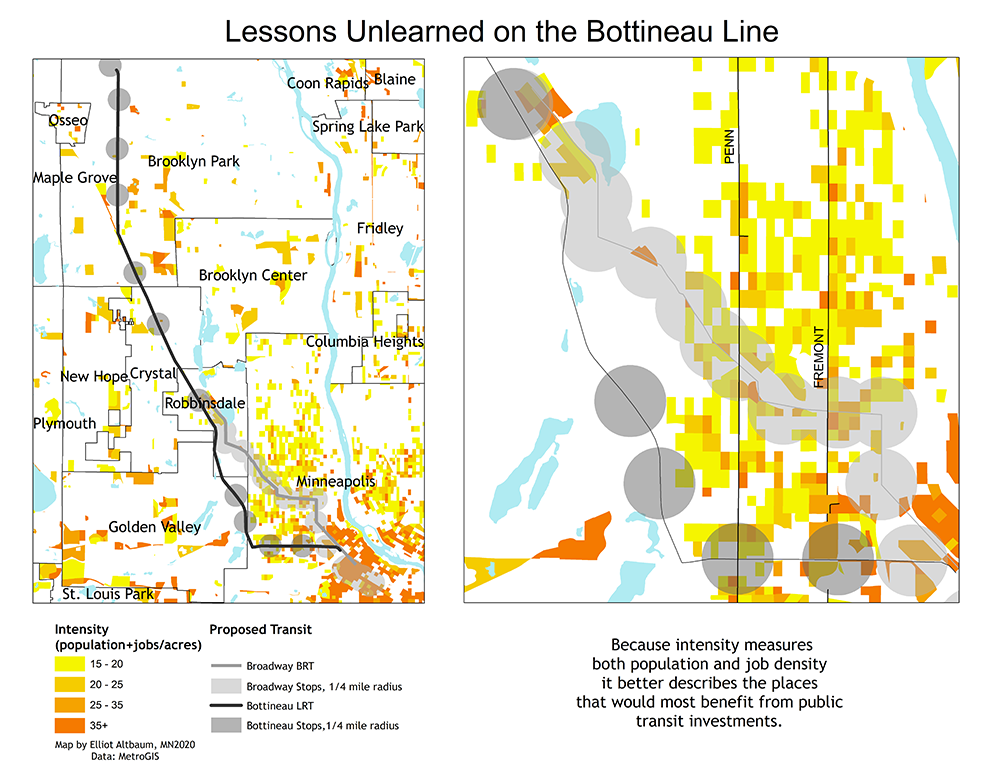 Many people have written about the alignment of the SW LRT and the ensuing battles. Much less public attention, however has been placed on the Bottineau corridor in the Northwest. The Bottineau corridor is an extension of the current Blue line from Mall of America to downtown Minneapolis. The expansion will run from downtown Minneapolis north through Golden Valley, Robbinsdale, and Crystal. Just as in the SW corridor, the Bottineau route quickly leaves the densest part of the region and heads for the suburbs.

The final planning process evaluated two routes through Minneapolis. The first of the two alignments runs the LRT along Olson Memorial Highway with stops at Van White Boulevard and Penn Ave N before leaving Minneapolis. The second alignment stays in Minneapolis for 2 additional stops by turning north onto Penn Ave. Stops are at Penn/Plymouth and Broadway/Penn. The Met Council chose the Olson Memorial Highway route. While the Met Council and the region is planning the Bottineau line, there are many other corridors in the Northwest metro that will see investment. This includes Bus Rapid Transit (BRT) routes on Penn Ave N and Fremont/Emerson Ave N. Additionally, Minneapolis is independently planning a streetcar system through the city.

Minneapolis wants to build a streetcar system on high capacity routes that run through high intensity areas. Because the streetcar system only goes through Minneapolis, the city would have to pay for it without support from the county, region, or state. One of those proposed routes runs along W Broadway, partly on the route not chosen for Bottineau LRT. By setting routes that travel around Minneapolis, the Met Council avoids the needs of citizens in Minneapolis. This forces Minneapolis to pay for its own, separate system. This is an inefficient use of funds by both the city and Met Council. That Minneapolis feels it needs to build its own system should send a signal to the Met Council that its transit priorities do not adequately serve the core of the region.

Up next is the Midtown corridor in Minneapolis.