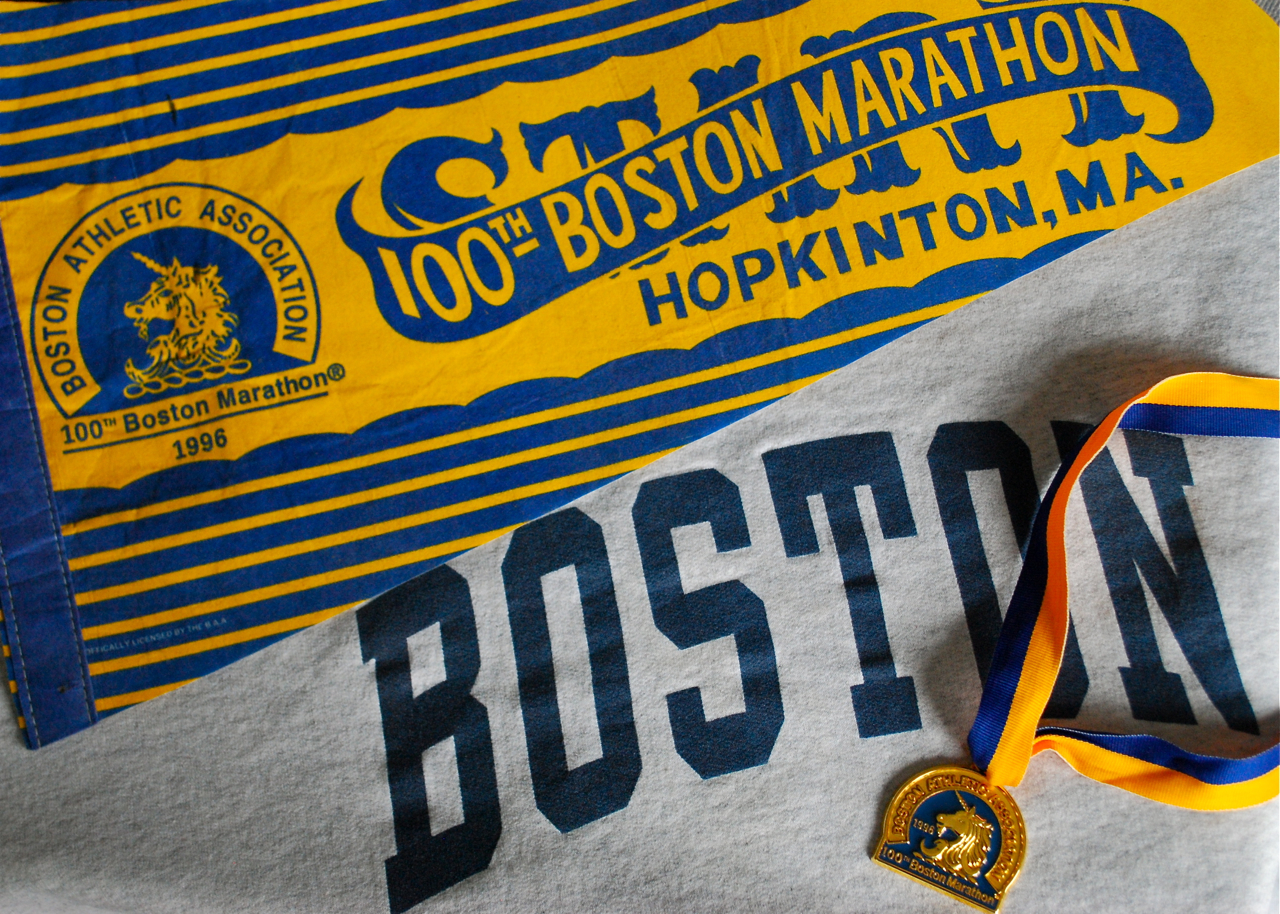 A week ago today, without even thinking, I put on an old grey sweatshirt I’ve had since 1996 but have probably not worn for several years. It wasn’t until after hearing about the horror in Boston last Monday that I thought about the shirt I’d worn the night before. It was an inexpensive sweatshirt with the word “BOSTON” printed on it that I’d bought it as a souvenir of my trip to run the Boston Marathon 17 years ago. I got a chill when I realized I hadn’t even remembered that it was marathon weekend until I heard about the bombings the next afternoon.

Yesterday I wore a Twin Cities Marathon shirt to the health club, as I often do. A woman walking by me said, “good to see you guys wearing your shirts”. I looked around and two other people near me had marathon shirts on, too — but they were from other races. I wondered why a stranger would say she was glad to see the shirts. As I watched some of the endless reports about the tragedy on the TV screens while running on the treadmill, it dawned on me that she might have been referring to our shirts as a sign of support for the people at the Boston race.

As I chugged away on the treadmill — 17 years older, 20 pounds heavier and a LOT slower — memories of my big race day flooded back to me. I thought about the bus ride to the little town of Hopkinton, part of the enormous field of runners (almost 40,000) who ran that year to commemorate the 100th anniversary of this unique and historic event. I remembered the exhilaration of the start and the energy created by the river of thousands of runners flowing through the countryside and small towns on the first part of the course. I could picture the huge billboards with old black and white photos from the early races. But most of all, I remember the people, the spectators, all along the course. They were there to cheer on the runners, to be sure, but really they were there to cheer for the community — to cheer for themselves and for each other. There were bands, there were Patriots Day parties, there were kids up in trees, there were people wearing (and painted in) red, white and blue all along the way. All were cheerful, all were proud and all were glad to be part of this American spectacle.

I think an urban marathon is a community event in ways that no other sporting event can match. It’s about so much more than just the athletes. Think about it — you can walk up to the course at any point and (free of charge) literally touch everyone from a world-class runner down to a plodding 6-hour jogger. The race cuts right through neighborhoods and downtown streets — no need to drive to a suburban stadium or buy an expensive ticket at a downtown arena.

Over the past week, the people of Boston have shown what they’re made of. They’ve shown the rest of us how to handle unthinkable tragedy — just like New Town has recently, just like New York City did in 2001, just like Oklahoma City before that, and just like other communities who have suffered severe trauma. None of us know for sure how we will react when and if it’s our turn, but this week we can take strength from watching and listening to the people of Boston. Because they are strong and resilient — even defiant — we believe that we can be, too.

The bombers chose a big event, an important event, an event with easy access, to spread their particular brand of terror. What they didn’t realize is that they chose an event in a city that will not shrink in fear and ultimately will be stronger, not weaker because of their actions. My deepest sympathy to those directly affected last Monday and my thanks to the people of Boston for what you’ve taught us.

I’m wearing my BOSTON sweatshirt as I type this and I’m going to be wearing it a lot for a while. It’s an honor to have had the chance to be a miniscule part of the history of this great event and great city.