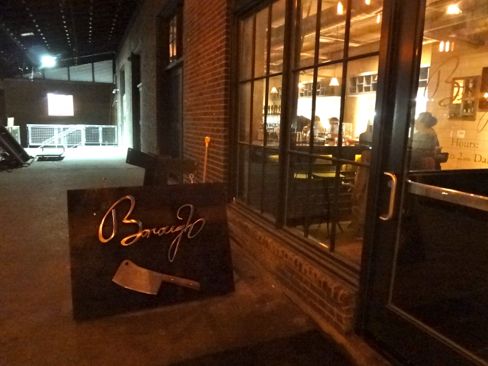 I can’t say that I was really looking forward to the arrival of Burough and Parlour, the new restaurant and cocktail bar In the North Loop, with very much enthusiasm. Maybe I am just getting jaded, or bored, but it seems like every week, some new hipster hangout opens up somewhere in Minneapolis (why so seldom in St. Paul?), and they mostly seem to follow a familiar formula – they all have a big selection of craft beers, and they all have something with pork belly on the menu, and small plates at what used to be big plate prices, and signature cocktails prepared by a celebrity bartender.  And they are mostly crowded and noisy.

Okay, maybe I exaggerate. They don’t all have celebrity bartenders. And none of these restaurants are bad – in fact, most of them are pretty good.  But it is starting to feel a little like same-same.

Then I find out that the owners of Burough and the Parlour are the same people behind the Pourhouse and the now-demolished Cowboy Slim’s, and even though I have never set foot in either of those establishments, that doesn’t stop me from having an opinion about them.

In building my case against the place, I conveniently discounted the fact that two of the chefs for the new restaurant were alumni of Travail in Robbinsdale, one of my favorite restaurants, and a place that I am definitely not jaded about.

So, at any rate, I went into Buroiugh the other day with what you might call an attitude. I was prepared to be underwhelmed.

Boy, was I wrong. 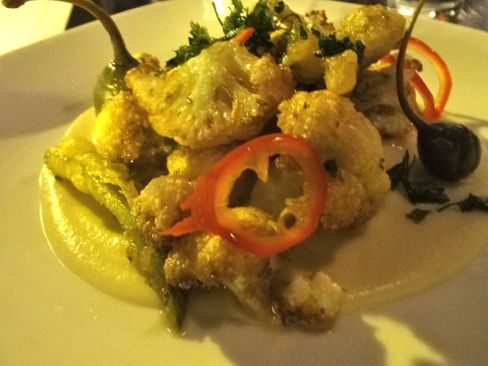 Carol and I only ordered a handful of dishes between us, but everything we tried was impressive.  A small plate of cauliflower florets, lightly floured and fried with spears of pickled peppers, an oyster and a few caper berries ($9) was a composition that insisted on being savored, one small bite at a time; as did the tuna ($14), a poke-like puck of raw fish flavored with dashi, pickled ginger, sesame, a drizzle of avocado, a tiny cube of mango jelly and a sprinkling of puffed rice. 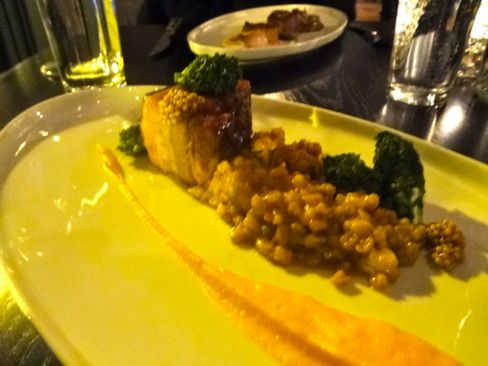 We had the same pleasure of discovery with the next round of dishes, selected from the medium plates section of the menu. My pork belly ($13) was a little square of tender slow-cooked succulent meat, accompanied by a pilaf of faro, a swoosh of carrot puree, and a garnish of rapini florets. In a larger serving, the fattiness of the pork might have seemed overwhelming, but this portion was small enough to be a permissible indulgence.

Carol’s scallops ($16) were even more sensuous – two large pan-seared scallops on a bed of creamy parsnip puree, garnished with maitake mushrooms and pearl onions. We finished by sharing a dessert of flourless chocolate cake, garnished with an espresso mousse, a cherry puree and a dollop of cherry ice cream. 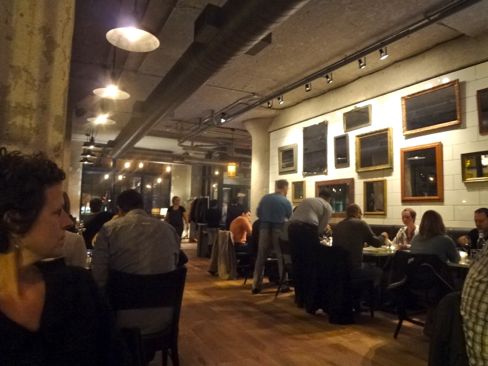 Overall, the dining experience was delightful – the dining room was neither crowded nor noisy – though that may still come, as Burough’s popularity grows – and the décor of antique mirrors, and four-sided cheese graters made into lampshades, gave the room a feel that was at once playful, relaxed and romantic.

Service was friendly and attentive – though the practice of servers replacing our tableware between courses with cutlery from a silver serving tray seemed like an odd Downton Abbey touch that didn’t quite fit with the minimalist bistro aesthetics of the place.

In retrospect, it probably isn’t fair to compare Burough to all those other places with the celebrity bartenders and the pork belly dishes. The cuisine is more refined and ambitious. I didn’t get the same “what have these guys been smoking?” reaction that I sometimes got from Travail’s more  inventive offerings, but the level of creativity and talent is high.

Burough is also more expensive than those other places – we managed to spend about $100 for the two of us, plus tip, without sampling any of the big plates, such as the fried chicken with buttered potatoes and mustard greens, or the short rib with winter oatmeal, grape nuts, cramberries and salsify. We may not go back very often, but we’ll be back.

Next tme, I hope to also check out Parlour, the bar in the basement, which offers a limited menu (fries, charcuterie) and “craft cocktails.” 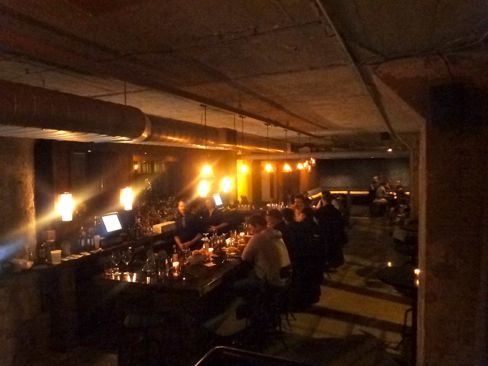