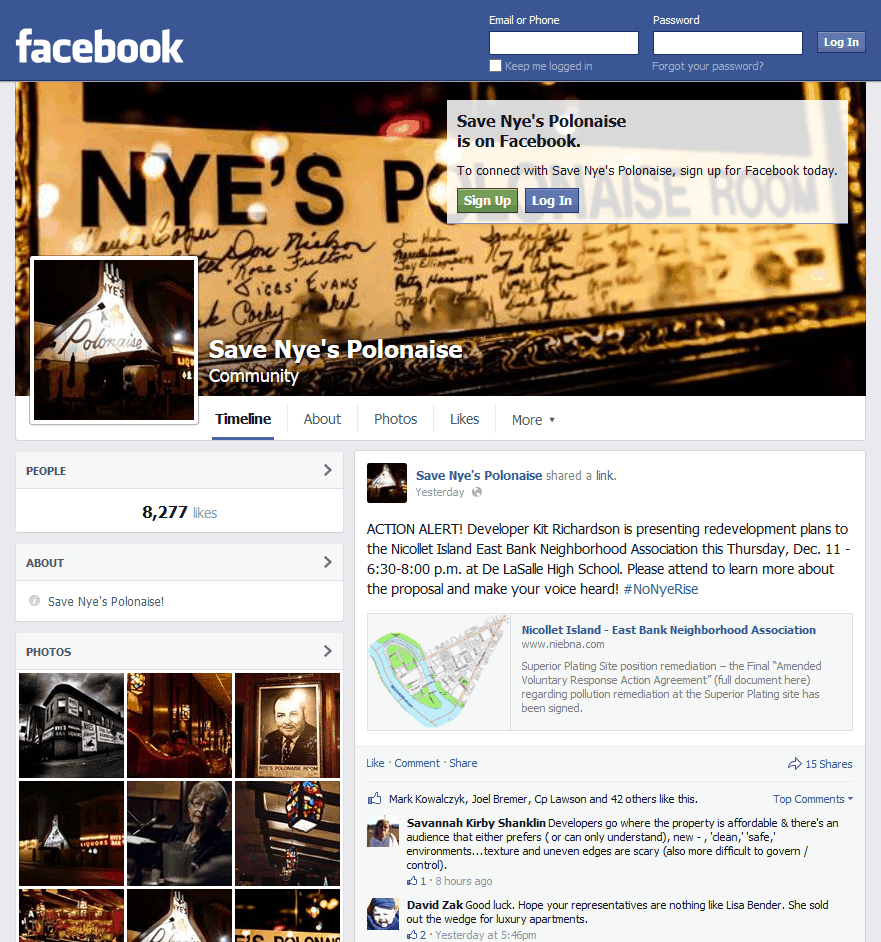 Last week, the owners of Nye’s Polonaise Room announced that the beloved Northeast Minneapolis bar would be closing next year to make way for a residential tower of some sort. It’s pretty sketchy what that will ultimately entail, but quotes from the developer indicate that the existing building will need to be demolished to make a tower work on the site, which is pretty small. It’s worth pointing out that, by now, you’d hope that smart developers know to start out with something crazy to then negotiate down to what they actually want to do. Also, the developer in question lost the nearby/huge Pillsbury “A” Mill complex to foreclosure after proposing an ambitious redevelopment plan about five years ago, so who knows, anything is possible in real estate. In any case, it seems like the bar & restaurant itself will be closing. The owners say they can’t make Nye’s work as a business anymore, but of course you’d want to take that statement with a pretty big grain of salt.

Lots of reactions to the news on the Internet. A Facebook group, Save Nye’s Polonaise, was formed and managed to rack up over 8,000 likes. It’s kind of an odd situation; there’s no way, legally, to force anyone to keep Nye’s open, though the City can certainly prevent the buildings themselves from being demolished. The two and three story structures on the site date back to 1907 and 1905, respectively. Very old! Older than–just spit-balling here–99.99% of the currently-standing buildings in Minnesota. Recently, the City Council has allowed the demolition of a 104 year old Gluek’s tavern in Cedar-Riverside (to make room for apartments) but did not allow the demolition of a fairly unremarkable one story commercial building dating to the 1920s in Dinkytown. So kind of a mixed bag there. I think it would be fair to say that, generally, people are much more upset about losing Nye’s than losing the buildings.

Anyway, Nye’s itself is pretty cool. It was named the Best Bar in America by Esquire in 2006, the same year that Eden Prairie was ranked one of the Top Ten Best Places to Live in America by Money Magazine. I want to say I’ve been there four times since being of legal drinking age, but one trip was a Pedal Pub stop, so we’ll say “annually.” From perusing the Facebook and unfortunately having a Twitter and hearing and seeing lots of miscellaneous commentary about this, many opinions on this topic are held by people who do not frequent Nye’s on the regular. (…granted, many of their regulars may not have Twitter)

But rather than go the extremely easy route with this one (i.e. when’s the last time any of you went tho?/who’s a REAL Minneapolitan contest) we could probably ask a broader question. How come Minneapolis doesn’t have a lot more cool, old stuff like Nye’s? Minneapolis doesn’t have a ton of history compared to, say, Boston. As a city, we’re pretty new. Parts of the city proper were literally open country when my grandparents were born. Much of what was here before then, including almost the whole downtown core and many other things, was bulldozed. Which, we ought to keep in mind all the time every day, was very progressive and en vogue at that time. For every cool thing we still have like Mayslack’s or Murray’s, much more has been lost–you can look to the Lost Twin Cities series or James Lileks’ awesome website for examples. 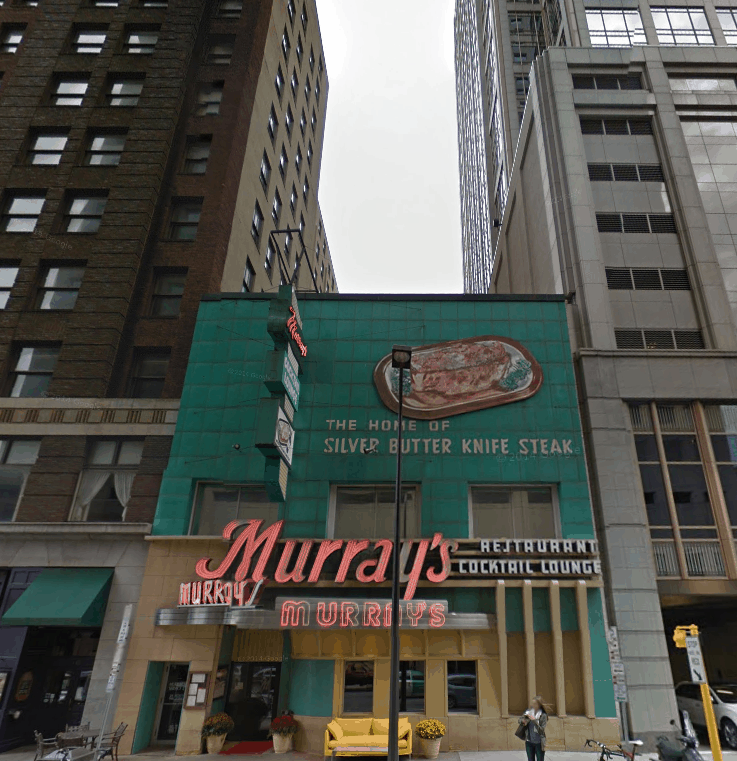 Very good. Would highly recommend you have your dad take you there while he’s in town for work. (Source: Google Streetview)

Who is responsible for our lost sense of place and character? Certainly on some level, when we’re thinking about our built environment and freeways and “slum clearance,” we can conveniently blame the government or, in some cases, real estate developers. But when you think about the actual businesses (as it appears many people are this month) like the independent grocery stores, restaurants, bars, movie theaters, and so on, it’s hard to blame the government. Who is responsible for those things going away?

We are! We, the consumers. As a rule, probably avoid using the word “consumer” (esp. in place of “citizen”) but when we’re talking about our commercial spaces, it works.

In general, people do not put their money where their mouths are, when it comes to interesting things in our urban environment. Even within the city limits, people buy frozen food at Target and come home and watch bad reality TV and, when they want to go crazy, they go out and eat at Applebee’s. And, I cannot stress enough, my point (for the purposes of this post) is not that people should not do that or that they’re bad people for doing that, but rather, people should spend their money differently if they want more neat, old, unique stuff like Nye’s. Businesses will appreciate your patronage considerably more than your likes on Facebook.

It’s sort of a weird country we live in, where people in Mesa, Arizona and Manchester, New Hampshire and Minneapolis, Minnesota basically shop at the same six stores and eat at the same ten restaurants. Even our houses are built by national chains. Certainly some part of this is financial–Wal-Mart and McDonald’s employees only being able to afford shopping at Wal-Mart and eating at McDonald’s, etc. 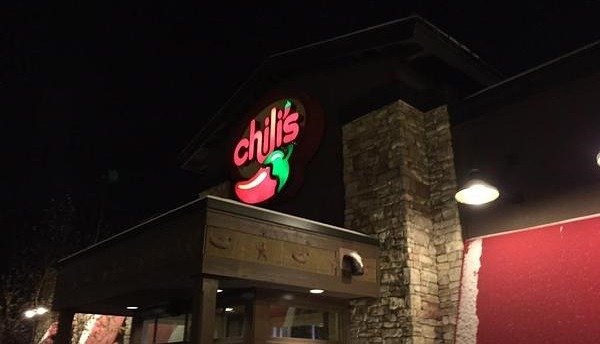 A Chili’s in Woodbury or Burnsville or Woodbury, NJ

But, for many, and in particular the type of people who might loudly protest the closing of a beloved neighborhood bar, you do have a choice.

It will probably cost more. And I don’t mean to pick on the Facebook group specifically, but just as a matter of math, I’m pretty sure that a significant portion (I dunno, 75% maybe?) of that 8,000 people could figure out how to budget shopping at a co-op (or other local grocery store) and eating at locally-owned restaurants or even going to a barbershop rather than a Great Clips–I struggle with that last one. Still need to find a regular barber.

In the abstract, people hate that Dinkytown is getting all corporate/developed/full of chain stores. People wearing Ugg boots and North Face jackets carrying Macbooks while drinking Starbucks could be reached for comment about Dinkytown, and ugh, so corporate now. Though to be honest, other than CVS putting House of Hanson out of business, Dinkytown isn’t particularly more chain storey than it was ten years ago. That ship sailed a while ago. You can’t run a business on prime real estate by selling cigarettes and chasers. If people want places like House of Hanson to stay open, they need to actually shop at House of Hanson. (Note: By the time Target Express opened up, House of Hanson was long gone–and if you think about it, long-term, a Target Express in Dinkytown may be worth it if every year it exposes thousands of college students from the second ring suburbs to the possibility of forgoing a car, but that’s a whole other thing.)

It’s possible that we could be building a considerably more endearing environment for ourselves around here. Americans and Minnesotans pay good money to fly to France and walk around because it’s cool to do that in France. Europe as a concept has been wrung pretty dry by streets.mn, but consider that for a second. In recent memory, approximately one hundred thousand University of Minnesota students from, say, Maple Grove, studied abroad in, say, Barcelona, Instagrammed the hell out of it, came back to the states, and then moved back to the suburbs after graduating. And again, you know, free country. But re-Facebooking old pictures of a cafe in #Copenhagen aren’t doing you any good in real life if you’re doing it as you’re driving into the parking lot of a Noodles & Company.

Disclaimer: The author was in Chicago this past weekend and ate three (3) Dunkin’ Donuts. At one point, he walked up to an intersection in Wrigleyville and accidentally said aloud, “Wow, lots of local businesses around here.” He also has a pair of Ugg boots–sorry!!!!!!