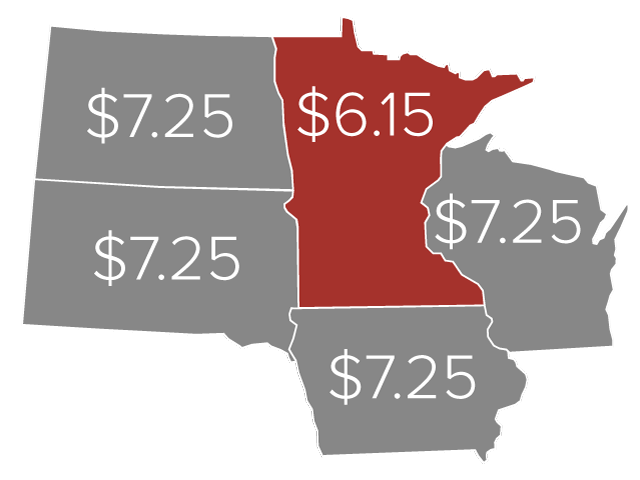 One conventional bit of argument about raising the minimum wage is shared by a businessman in extreme Southwestern Minnesota cited in Doug Beldon’s article in Friday’s Pioneer Press, Raising Minnesota’s minimum wage expected to be hot issue:

[Businesses} also worry about being at a competitive disadvantage if businesses in neighboring states don’t have the same labor costs.

“I’m 10 miles from Iowa and 10 miles from South Dakota,” said Glen Gust, owner of Glen’s Food Center in Luverne. If Minnesota goes to $9.50 and the other states stay at $7.25, “my competitiveness is going to be bad,” Gust said.

Minnesotans are used to a similar argument with regard to taxation, even though there’s little evidence of “tax refugees” created by higher taxes.

An article in yesterday’s New York Times challenges the notion that lower wages just across a state border only create an advantage for the low-wage side of the border. Kirk Johnson reports in Crossing Borders and Changing Lives, Lured by Higher State Minimum Wages:

In the nation’s debate about the minimum wage, which President Obama has proposed increasing at the federal level to $10.10 from $7.25, [Oregon’s] rolling borderland of onion farms and strip malls provides a test tube of sorts for observing how the minimum wage works in daily life, and how differences in the rate can affect a local economy in sometimes unexpected ways.

Ms. Lynch is one of the many minimum-wage migrants who travel from homes in Idaho, where the rate is $7.25, to work in Oregon, where it is the second highest in the country, $9.10. Similar migrations unfold every day in other parts of Idaho — at the border with Washington, which has the highest state minimum, $9.32, and into Nevada, where the minimum rate tops out at $8.25.

And while some business owners along the border said raising the minimum wage could keep them from adding extra employees, they also said larger economic forces were more important. For example, minimum-wage service jobs in stores, restaurants and motels have boomed on the Oregon side, despite its higher rate, mostly because Oregon has no sales tax.

The competition for workers has in turn forced many businesses on the Idaho side to raise their wages. “I have to offer more to my employees to keep them,” said Steven Lindsay, owner of Main Street Automotive, a repair shop in Payette, Idaho, six miles from Ontario. “People are going to go to where the money is. You can’t blame ’em. They have to make a living.”

. . .Many low-wage workers in this region said that what mattered as much as, and sometimes more than, the actual wage was the number of hours worked. Angela Lowry, 41 and a single mother, recently landed a full-time minimum-wage job in a thrift store in Ontario, and said she was thrilled to have it. She will get a paid vacation for the first time in years, she said.

The Times article, like that in the Pioneer Press, notes that there are trade-offs, and that low-income people who are paid more have government assistance benefits reduced. In the Pioneer Press article, Minnesota state representative Ryan Winkler (DFL-Golden Valley) addresses the issue:

“We basically have a situation in which we have a large number of low-wage jobs where people work and qualify for public assistance,” Winkler said. “We don’t want to create a situation in which working more and getting job skills and moving up the income ladder sends you off the cliff of benefits so that you have a disincentive to work more. At the same time, we don’t want to maintain the status quo where essentially the state taxpayers are subsidizing low-wage jobs.”

Check out both articles at the Pioneer Press and the New York Times.

In the Pioneer Press article, Tom Bakk repeats his concern trolling about a hike in the minimum wage hypothetically causing nursing homes to close:

Senate Majority Leader Tom Bakk of Cook said that it’s possible to get enough support for $9.50 in the Senate but that a variety of issues will need to be worked through first. “This is about a lot more than just a number,” he said.

In addition to the rate and indexing to inflation, the House and Senate differ on parental leave and overtime for agricultural workers, Bakk said.

He said he personally supports $9.50 but would want to make sure the increased rate wouldn’t put undue financial pressure on small-town nursing homes, which can’t simply raise prices to cover new costs.

“What I just want to make sure of is that when I cast that vote, if that nursing home closes, I don’t want anybody saying, ‘Well, Bakk raised the minimum wage and we lost our nursing home in our town.’ That’s critical infrastructure in these little rural communities.”

Recently some legislators, Senate Majority Leader Tom Bakk more prominently, who support the idea of raising the minimum wage, have expressed concern that a $9.50 minimum wage would hurt Minnesota nursing homes. They have expressed fears that if homes were forced to pay all workers $9.50 an hour, many would close. . . .

Since, however, our union includes over 4,000 nursing home workers, we share Senator Bakk’s concern. We wanted to be sure we did not do anything that would cause workers to lose their jobs.

Yet even these numbers overstate the impact of a minimum wage of $9.50. For starters, the $9.50 wage would not go into effect until August 1, 2015, so natural wage increases will have already lifted many nursing home works above the minimum. In fact, Senator Bakk and other DFL legislators have passed for this year a 5% average increase in nursing home funding so that homes can increase wages. A smaller 3.2% increase has been scheduled for 2015. That state has already provided funds for homes to meet most if not all of their costs under a higher minimum wage. In fact, a higher minimum wage would help make sure that those increases in nursing home funding went to workers who care for our vulnerable seniors.