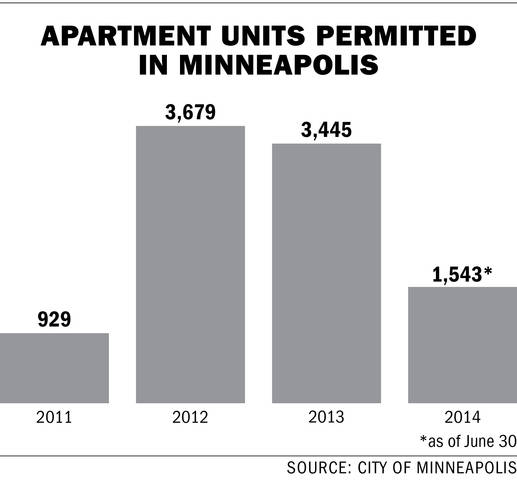 A chunk of the city’s construction this year comes from projects near the University of Minnesota — a product of the ongoing student housing boom that is being watched with bated breath.

Developers have targeted properties near campus in recent years. So far in 2014, the city has approved at least $118 million in building permits for new student housing — a significant portion of Minneapolis’ total value — but some developers say construction in the area might slow down in the future.

Daniel Oberpriller, owner and president of CPM Companies, said while he expects the company to add 2,000 beds to the University area next year, he does not expect any developers to propose new, large projects for the student housing market in the future.

“I think we’re in a holding pattern to see how everybody fills up,” he said. “It’s just your basic supply and demand equation.”

“Markets like this usually will evolve,” Barton said. “There’s an awful lot of students that need housing around the University.”

Oberpriller said he thinks the next big construction explosion in Minneapolis will be from hotels and hospitality-related buildings, though he said he does not think those projects will find a home near campus.

“Land around the ‘U’ is expensive,” he said. “And quite honestly, the only thing that can pay it back is having student housing. You can’t do a hotel on expensive land.”

“Even if you just drive around downtown, you’ll see a lot of cranes,” he said.

From 2011 to 2012, the number of apartment or condominium units permitted in Minneapolis jumped from 929 to 3,679. After a slight drop last year, that number only reached about 1,500 as of June.

“I anticipate that we’ll match or even exceed [the number for 2013] by the end of the year,” Kress said.

Minneapolis has already approved more than $1.2 billion in building permits this year — a number that matches the city’s total value last year — and it’s anticipated to reach $2 billion by the end of 2014.

Kress said breaking the $1 billion mark in August — a milestone only reached in October last year — shows that the city is growing.

And part of that growth comes from the opening of the new Green Line light rail, said Ed Goetz, a professor at the Humphrey School of Public Affairs and director of the University’s Center for Urban and Regional Affairs.

He said the light rail is drawing developers to build along its path from downtown Minneapolis to St. Paul, but not necessarily near campus.

“Overall, the construction is good for the city of Minneapolis,” he said.