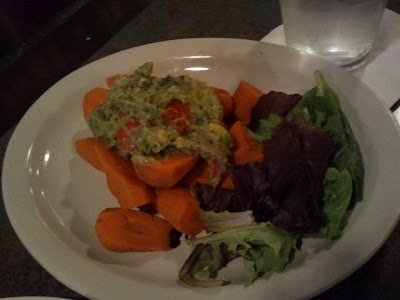 Yesterday marked the premiere of Boom Island Brewing‘s new beer, Brimstone. The new brew is on tap at Eli’s Food and Cocktails. Unbeknownst to me, Eli’s now has two locations, the downtown spot and a new restaurant over in Northeast. I went downtown, and missed out on the debut of Brimstone on tap. That turned out to be a fortuitous mistake, because…

…Eli’s has various items that come and go from its menu, especially its appetizers. Two such appetizers jumped out at me – the chicken tinga and carrots sprinkled with ghost pepper flakes. Eli’s chicken tinga comes with a jalapeno and pomegranate sauce. One of my specialties is a lychee/mint salsa, and I’ve tried a similar salsa with pomegranate, to varying degrees of success. (Those being “excellent” for me, and “insanely spicy” for everyone else.) So I ordered both dishes. 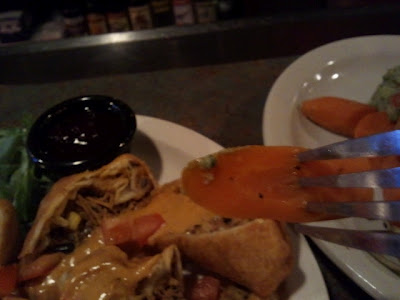 The chicken tinga and jalapeno/pomegranate sauce gave me ideas about how to mix those two together: put peppers and pomegranate seeds into a food processor, then add water, butter, and brown sugar, and boil the mixture down until it reaches the right consistency. I’ve now got a new spice recipe to play with, and that alone would make the evening a success.

After my last encounter with a ghost pepper, I was understandably nervous about repeating an unpleasant experience. So I asked the bartender if their ghost pepper carrots were covered in a sauce or just had flakes. The photo above shows the little black flecks of bhut or naga jolokia that perfectly adorn the appetizer. The carrots come with a guacamole sauce and greens on the side. Both garnishes allow you to experience the smoky hotness of the ghost pepper and still cool down from the spice.

If the guac and greens don’t do enough to counter the heat, Eli’s has Boom Island brews on tap as a salve to the taste buds. While they didn’t have the Brimstone on tap that night, I count myself fortunate to have gone to this particular location. The appetizers and dishes with the ghost pepper are not permanent menu items and are therefore subject to the whims of the chef.

The next evening, however, I ventured into the Hawthorne neighborhood for the opening sale of Brimstone growlers at the Boom Island site. I picked up two, and headed home to put the beer in the fridge and a mug in the freezer. (Quality beer must ALWAYS be served in a frosty mug. The literary classic “Dante’s Inferno” references a specific Miller Lite Circle of Hell for those who fail to obey this commandment.) 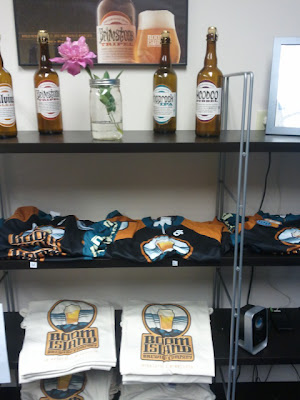 At their headquarters there are plenty of opportunities to pick up some Boom Island swag as well. The t-shirts are reasonably priced, and there are biking shirts too. I haven’t graduated in bicycle snobbery to the point of buying bike-specific sportswear yet, so the price for that apparel seems a little outrageous. If I spend that much money on an article of clothing, I want one of three things: A guarantee from Men’s Warehouse that I’ll like the way I look, a signature from a professional athlete, or the official endorsement of a comic book superhero.

Without enough money for that level of clothing, I picked up my growlers of Boom Island’s Brimstone beer. I have only one complaint, and that’s that a beer called Brimstone should be a darker brew, like a guinness or a port. Semantics aside, it was time to see how the beer would taste. 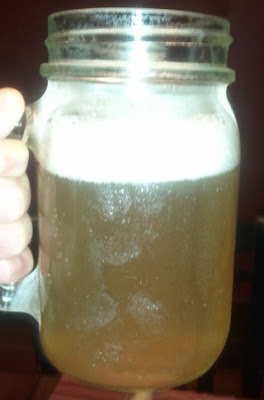 The label taunts the drinker: “Brimstone? You mean fire and brimstone? What could this award-winning, Belgian-style Tripel have to do with divine punishment? Taste it. See how three times the malt brings three times the pleasure? That’s divine. Now, did you detect each of the unique spices and esters working their magic? No? Your punishment is to have another sip.”

As I’ve said before, I freely admit my inability to articulate the intricacies of finer beers. I only know a good beer when I taste it, and Brimstone passes that test with flying colors. I did detect a hint of cilantro (I think) as well as several different strains of hops. Beyond that, the beer perfectly complimented a Jamaican jerk pork and garbanzo bean dish I cooked this evening, and that’s everything I could have asked for.

As an added bonus, at the premiere tonight, I ran across one Boom Island brewer who tipped me off to a restaurant that serves dishes cooked with the Trinidad Scorpion – the only pepper on the planet that has on occasion been classified as hotter than the ghost pepper. The quest for great beer has been quenched, but the desire to conquer hot peppers continues.