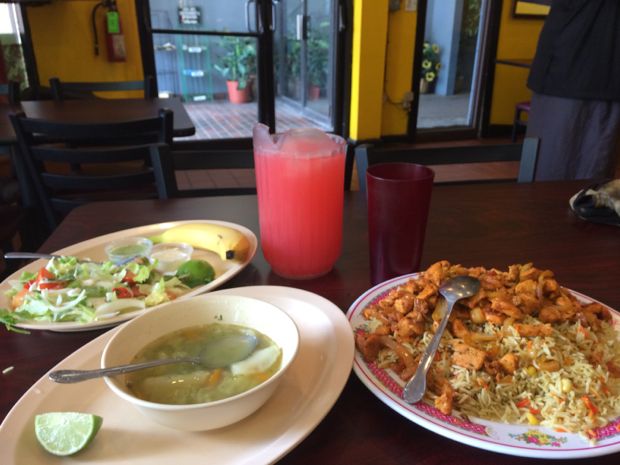 Ten bucks buys a lot of food at Boolaay, the little Somali restaurant on Eat Street = not to be confused with Bouley, Daniel Bouley's upscale French restaurant in Manhattan.

Ten bucks buys a lot of tasty food at Boolaay Somali restaurant – not to be confused with Bouley, the upscale French restaurant in Manhattan. At Bouley, the appetizers start at $22 at lunch for the Porcini Flan with Alaska Live Dungeness Crab and Black Truffle Dashi. At Boolaay, ten bucks gets you a big plate piled high with savory rice pilaf and diced chicken or beef suqaar, plus vegetable soup, salad, fruit drink and a ripe banana – easily enough for two. A variety of other entrees and baked goods are also offered, to dine in or take out.

Here’s a YouTube video of Boolaay from Liban North America’s Somali TV Channel – I don’t know what they are saying, but it looks like they are enjoying the food:

Correction: A previous version of this story misspelled the restaurant’s name. It has been corrected to ‘Boolaay Restaurant.’