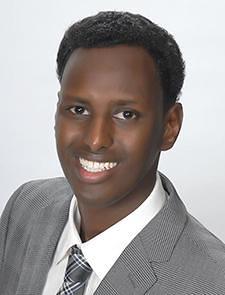 The story of Hamse Warfa begins in a place not unfamiliar to many immigrants in Minnesota: Mogadishu, the capital city of Somalia. But where that story culminates (at least for now), is quite unique: with a memoir Warfa released last month: “America Here I Come: A Somali Refugee’s Quest for Hope.”

Growing up, Warfa was financially better off than the boys he played soccer within Mogadishu: His father, Mohamed, was a livestock trader, and his mother, Hindisa, ran a clothing retail business. Together, they had a private driver who took care of their needs and those of their 14 children, including Warfa, the 12th born — a luxury many Somali families didn’t have at the time. “My family lived quite comfortably in an affluent part of Mogadishu,” he said. “I had anything I needed as a child.”

When the civil war erupted in 1991, however, the Warfa family’s luxurious lifestyle disappeared. After armed groups ousted the military government of President Mohamed Siad Barre, the country collapsed into anarchy. Killing, looting and rape came to define Mogadishu.

Warfa and his family escaped to a Kenyan refugee camp, where they faced series of tribulations for three years. Food was scarce. So was clean water. Warfa spent days and nights under a small tent. There were also violent crimes and armed robberies. Organized gang members, taking advantage of the lack of security, roamed the camp.

“We felt like our dignity was taken away,” said Warfa of life in the camp. “We were proud in our country, working and getting quality education.”

Road to the United States

After three years in the camps, Warfa and his family eventually arrived in Denver, Colorado, in 1994, thanks to the Church World Services, which arranged the departure through the Family Reunification Process.

Warfa faced alienation and a language barrier when he first arrived in the United States as a teenager. He was one of a few people of color at South High School in Denver — and struggled with the American culture. Indeed, even though he qualified for the free and reduced-price meals, he avoided eating at the school.

“The biggest challenge we encountered was that we came with the perception that any food in America contains pork and alcohol,” he said. “So I didn’t eat there because most of the food, in my mind, had pork or alcohol.”

And he didn’t know enough English to ask about the types of food the school served. So he didn’t eat there for more than a month, he said, feeling isolated and unwanted. “We didn’t feel welcomed. As much as the school administration tried, we still felt lonely and out of place.”

While still new and barely speaking English, Warfa had to find a job so he could contribute to the family’s expenses. Before he learned the meaning of “interview,” Warfa one day was called for a job interview at McDonald’s. He went to the interview wearing jeans and boots, eager to win a dishwasher position.

When the manager asked him why he was interested in working at McDonald’s, Warfa’s response was swift and honest: “Because I need money.” He got the job.

Immigration services often assign refugees and immigrants to specific states according to where their sponsors live. In Warfa’s case, his brother, who supported the family, lived in Denver with his wife and children.

After a little over a year, however, Warfa and his family sought a more diverse space, where they could feel a sense of community, a sense of belonging. That led to San Diego, which at that point had the largest Somali population in the country.

Warfa and his family rented two adjacent apartments in City Heights, a neighborhood the San Diego City Council declared a “state of emergency” because of excessive criminal activities, including drugs, shootings and prostitution. But City Heights also had the things the Warfa family longed for: a diverse population of African-Americans, Somalis, Latinos and Hmong.

Tensions between African-American and Somali students

While attending Crawford High School in City Heights, Warfa witnessed melees breaking out between African-American and Somali students — in some cases, as many as 100 people would be involved in the fight, he said. 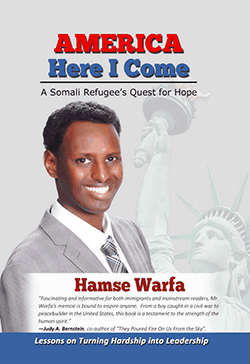 In his book, Warfa explores the cause of the fights between African-Americans and Somalis: “One would have thought since they have the same origin and color, there would be fewer problems between them,” he writes.“It was argued that African-Americans felt that Somalis didn’t understand the great sacrifices that African-Americans had made so that future generations could live in liberty. As far as the African-Americans were concerned, the Somalis seemed to enjoy the freedom with abandon, while they hadn’t contributed in any way to its attainment.”

Yet the many obstacles Warfa faced upon coming to the United States only seemed to strengthen his desire to become a valuable member of the Somali community.

He would eventually go on to get a bachelor’s degree in political science from San Diego State University and a master’s of science in organizational management and leadership from Springfield College. He is currently pursuing a Ph.D. in public administration at Hamline University, and works for the Eden Prairie-based Margaret A. Cargill Philanthropies, serving as a program officer.

With the Somali population increasing in Minnesota and states across the country, Warfa often contemplated ways he could promote cultural understanding between Somali immigrants and their American neighbors.

One of those ways came to fruition in late November, when Warfa published “America Here I Come: A Somali Refugee’s Quest for Hope,” a memoir detailing the swift change that came to his family’s middle-class lifestyle when the civil war broke out in Somalia and the tribulations that followed him in Kenyan refugee camps.

For immigrants, the book is a case study in the value of perseverance. For native-born Minnesotans, the book provides a thorough introduction to the rich history of Somalia — and a wider understanding of the thousands of Somali immigrants who are now part of their community.

Warfa will hold a book-launch event on December 13 at 3 p.m. at the Cowles Auditorium at the Humphrey School of Public Affairs.