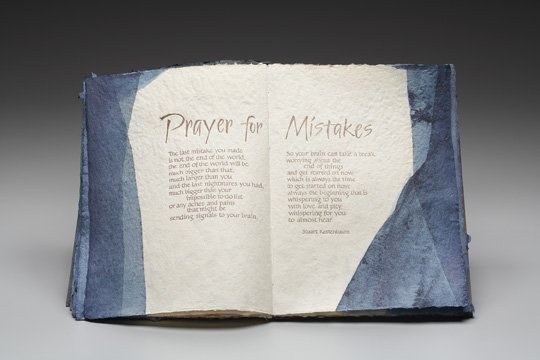 A Deep Blue Amen, published by Amanda Degener, with calligraphy by Jan Owen of poems by Stuart Kestenbaum.

Cave Paper and The American Craft Council will sponsor a poetry reading by Stuart Kestenbaum when he visits the Twin Cities in October. A reading and book signing will take place on Saturday, October 5 from 7:00 to 8:00 pm, at the American Craft Council Library, located at 1224 Marshall Ave in Minneapolis. An author’s reception will begin at 6:30 pm. The event is free and open to the public.

The event will celebrate the release of Kestenbaum’s latest book, A Deep Blue Amen, which was published by Amanda Degener, co-proprietor of Cave Paper. It is letterpress-printed calligraphy scribed by Jan Owen on indigo-dyed handmade flax paper made by Degener. A limited edition of 50 copies has been produced, each housed in a clamshell box made at Campbell Logan Bindery.

Kestenbaum will read from this and his other publications. He is the author of three collections of poems, Pilgrimage (Coyote Love Press), House of Thanksgiving (Deerbrook Editions), and Prayers and Run-on Sentences (Deerbrook Editions), and a collection of essays The View From Here (Brynmorgen Press). He has written and spoken widely on craft making and creativity, and his poems and writing have appeared in numerous small press publications and magazines including Tikkun, the Sun, the Beloit Poetry Journal, Northeast Corridor, and others including Garrison Keillor’s Writer’s Almanac. Kestenbaum is an honorary fellow of the American Craft Council and a recipient of the Distinguished Educator’s Award from the James Renwick Alliance.

Former US Poet Laureate Ted Kooser writes, “Stuart Kestenbaum writes the kind of poems I love to read, heartfelt responses to the privilege of having been given a life.  No hidden agendas here, no theories to espouse, nothing but life, pure life, set down with craft and love.”

Kestenbaum has been the director of Haystack School since 1988. Haystack Mountain School of Crafts in Deer Isle, Maine, is an intensive workshop program in a range of craft media, focusing on materials and creative process. Haystack has long been recognized for its innovative programming involving craft with design, new technologies, and other art forms. The campus, on the Maine coast, was designed by Edward Larrabee Barnes, and is one of America’s most important modernist buildings.