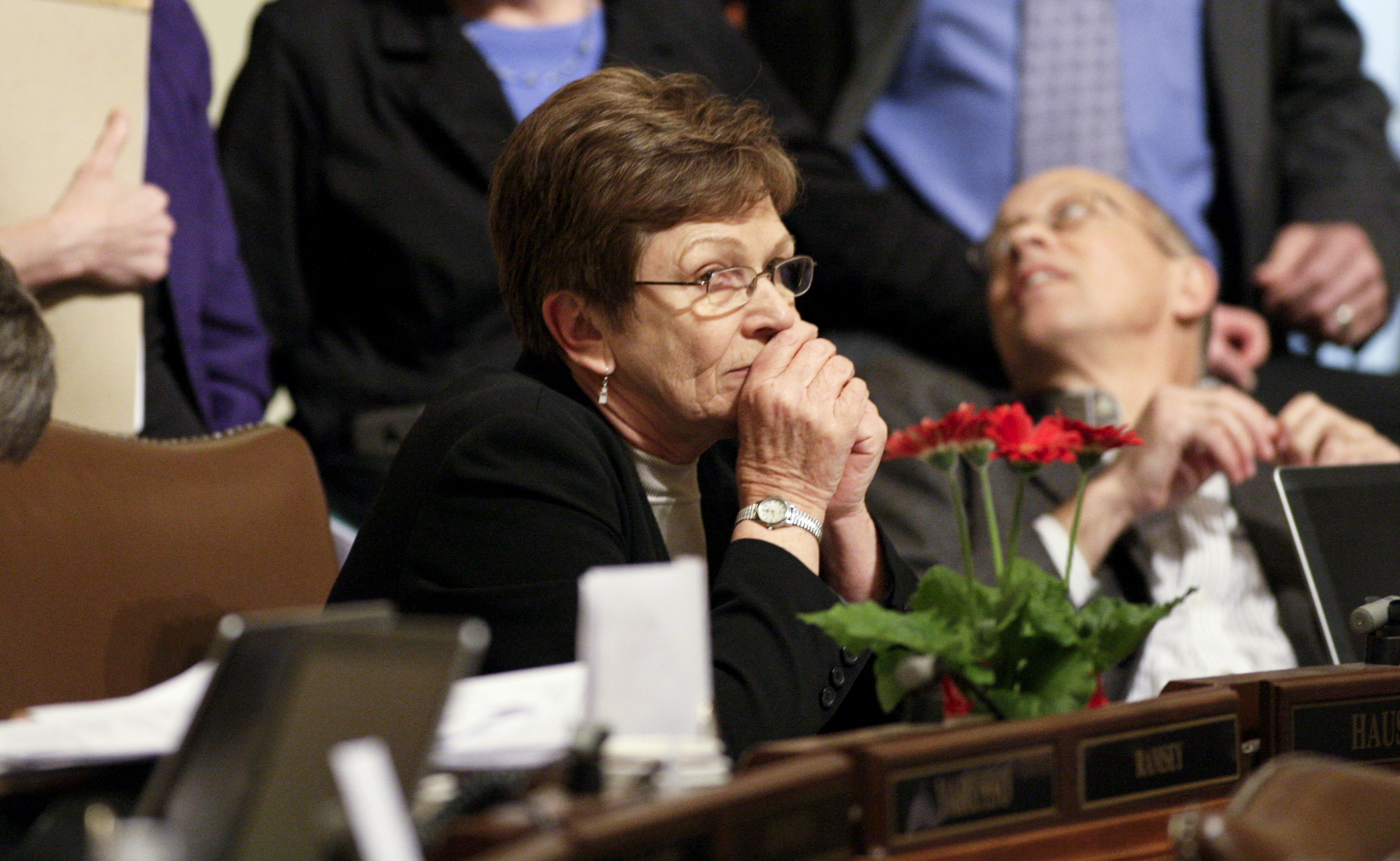 Rep. Alice Hausman watches the voting board May 17 while the vote is taken on HF270, the omnibus bonding bill. By law, the bill needed 81 votes to pass, but only received 76. (Photo by Paul Battaglia)

After the $800 million omnibus capital investment bill failed to garner the necessary number of votes for passage, Hausman considered it dead for the session.

“We’ve been trying for months to solidify the vote, so overnight nothing is going to change,” Hausman said. “It’s inconceivable to me how people could make this kind of judgment.”

Hausman said she had promises from enough Republicans to vote for the bill; however, they did not. She refused to name those members.

“She had no Republican commitments,” countered Rep. Matt Dean (R-Dellwood).

Republicans also perceived the bill as a lack of priority by the DFL, saying the budget should be resolved before the bonding and other bills are brought up for a vote.

“We came here to pass a balanced budget that would be good for Minnesota, and that’s what we’re eager to debate here on the House floor, and that’s what we’re eager to pass,” said House Minority Leader Kurt Daudt (R-Crown). “We need to get the budget here on the floor in bill format where we can debate it and vote on it before the next three days is up.”

The bill’s largest investment would be $109 million to continue restoration of the State Capitol. Another $94 million is expected to be needed in the 2014 bonding bill to complete refurbishment of the 108-year-old building.

“What I was told is if we didn’t have a bill this year, they have to just stop work, take down the scaffolding and they would have to start all over with a new group of legislators. It puts them two years out,” Hausman said. “In two years, we’ll have a whole different set of legislators who haven’t worked through what we have.”

Hausman said she won’t push for a bill in the session’s final days just to fund Capitol renovations.

“The Capitol is a noble project, an important project, we should do it. But why is it more important than higher education … or transportation infrastructure that keeps our economy going. If our economy keeps going, we can afford to do the Capitol, if the economy doesn’t keep moving, it doesn’t matter: we can’t do the Capitol.”

Rep. Lyndon Carlson Sr. (DFL-Crystal) said now is the time to put thousands of construction workers back to work with these projects, and that the state can get more bang for its buck with low interest rates.

“Passing this bonding bill would have made the best use of taxpayer dollars,” Hausman said.

What’s in the bill?

Among the bill’s proposed appropriations are: