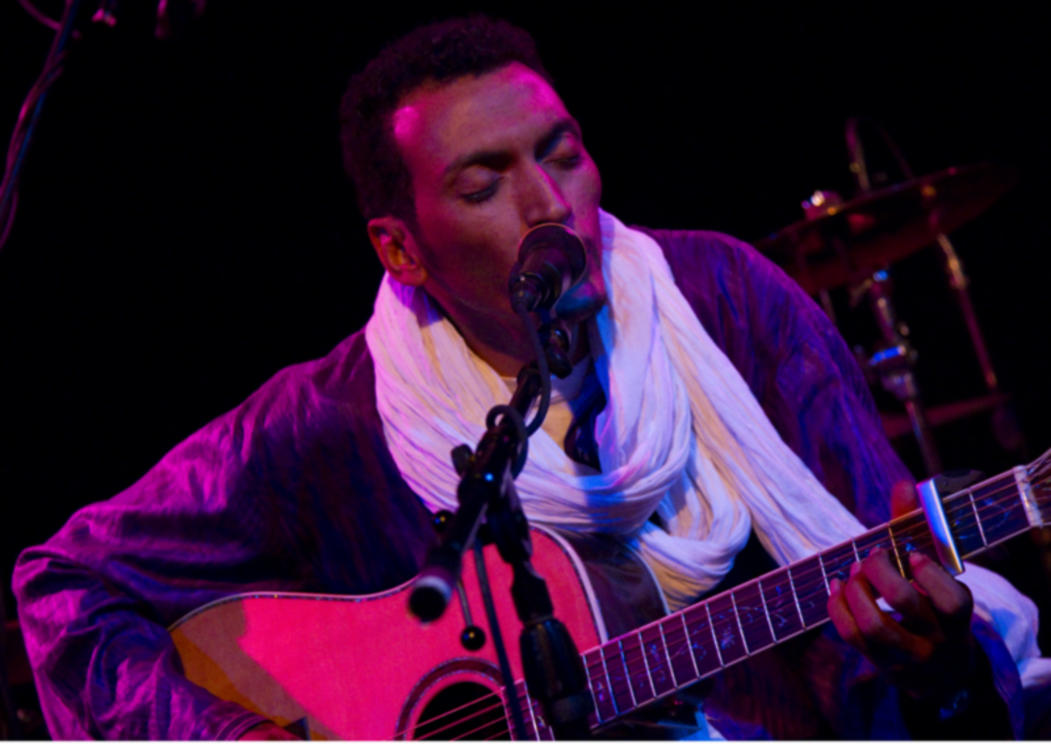 There is almost no possible way that someone could have walked away from Tuareg musician Bombino’s show at the Cedar Cultural Center (the first in the African Summer series) without being completely satisfied. Having said that, why do I feel like something was missing? Personally, I blame the Black Keys’ Dan Auerbach.

Despite any language barrier or possible lack of familiarity with Bombino’s music, the crowd was constantly moving and dancing to the tight groove that Bombino and his band wove all night. The acoustic three song opening set–performed with Bombino’s rhythm guitarist on percussion and his bass player–had a down home, toe tapping feel that is not at all unfamiliar to the Twin Cities music scene. All three songs had a laid back late night porch groove that culminated in “Ahulakamine Hulan” from Bombino’s recent album, the Dan Auerbach produced Nomad. Bombino and the bass player moved in a synchronized manner, easily locked into the same groove–something that didn’t let up through out the night. At times it felt like what I imagine a James Brown or Miles Davis concert to have been–the band just locked into that grove and the soloist just trying out ideas until they’ve got nothing more to say. Despite all this, I had the nagging feeling that something was missing.

A drummer and percussion player joined the band after that, and kicked things off quickly. It took a little while for the crowd to catch on to that inescapable groove that Bombino had tapped into, but once they did, the mass of concert goers in the middle were swept up into that familiar Minnesotan rocking/sort-of dancing motion. People at the edges of the audience seemed to be throwing their whole bodies into it, maybe because they had more room to dance. The last three songs of the main set were scorching. I’d heard his music described as psychedelic, which is something I didn’t really get from the album until his runs up and down the fret board started to sound like something you’d hear on a Doors album played by the late keyboardist Ray Manzarek. That’s not just in a figurative sense, Bombino’s guitar started to sound like an organ, and his riffs started to have the swiftness and clarity that is more associated with a fast piano player than a guitarist.

The crowd went nuts over the single “Azamane Tiliade.” The auxiliary percussion player acted as a hype man, dancing and cajoling the audience into clapping. Which drove home the point that some Twin Cities’ audiences are horrible at keeping a beat as it eventually just drifted off. The band didn’t seem to notice however, as Bombino was once again running up and down the neck of his guitar.  It was that song that drove home to me, what I felt was missing.

Auerbach had Bombino overdubbing his guitars on the recent album and running it through fuzz pedals and reverb for a massive sound, especially on “Azamane Tiliade” and “Amidinine.” That massiveness was what I was couldn’t hear. Instead, Bombino’s guitar was slick and wiry. Auerbach’s production of the album almost sells the song as if it was something else. Bombino himself was no stranger to guitar noise, as filmmaker Ron Wyman posted a clip from the film Agadez, the Music and the Rebellion on YouTube where Bombino’s fuzz tone on the song “Boughassa” is so monstrous it reminds me of Soundgarden’s “Rusty Cage.”

It didn’t matter though; I was crazy to think there was something missing from the show. There were funky bass lines anchoring that massive groove the entire evening, Bombino throwing off fiery lines and riffs, and most of the crowd dancing along to that groove. The second to last song worked itself into such a frenzy that the bass, drums, and Bombino’s guitar almost sounded like something Daft Punk would put out. For the encore, Bombino seemed immensely happy with the reception he’d received and found a vocal line the audience could repeat for a call and response as he danced away during parts of the final song. At this point, there didn’t seem to be anyone in the crowd who wasn’t into the energetic show. No one should’ve gone home feeling like they missed anything.

Local openers Crimes played quite well, in front of the half full hall. They had a good groove; it just may not have been the best pairing with a crowd waiting for Bombino, even those who had arrived early enough to watch them. Crimes played songs from their latest album Thin Sunlight, showing some flashes of pure possession in their evil surf pop sound. They were best when churning into a Pixies-esque frenzy–without any of Frank Black’s wailing. The standout songs from their set, were the ones I thought were standouts on the album as well:  “Wasted Me,” “Perfect Three,” and “Thrifty Vultures.” Though there are no windows inside the Cedar Cultural Center, you could still feel that it was too early to listen to their reverb drenched sound. Their music shouldn’t exist in the sun, it’s only for surfing at night–while holding a knife and a wicked grin.