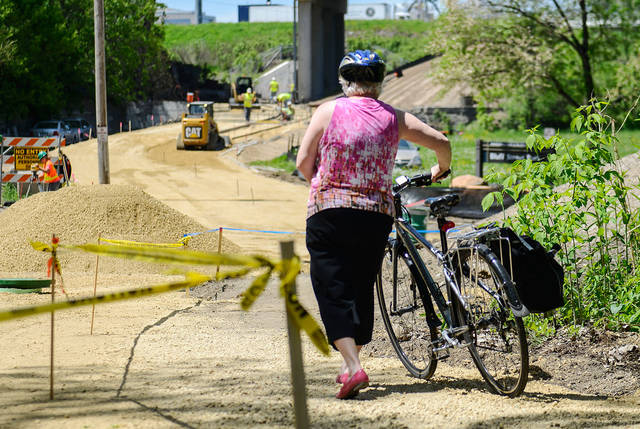 A woman walks her bike past an area where the Bluff Street Bicycle Trail Project is being built. The nearly quarter-mile project will connect the University area to downtown Minneapolis. (Photo by Holly Peterson)

After opening last August, a citywide bicycle project is nearing completion with a new connection between the University of Minnesota’s campus and downtown Minneapolis.

The nearly quarter-mile Bluff Street Bicycle Trail Project, which will connect downtown with the University’s West and East banks, is the third and final phase of the Dinkytown Greenway. The city’s Public Works department will complete the $3 million trail by as early as mid-July.

“The U of M and downtown are the two biggest biking generators in the whole state,” said Ethan Fawley, executive director of the Minneapolis Bicycle Coalition. “… It is really important that we improve connections between them and downtown.”

The trail will connect the Northern Pacific Bridge No. 9 — known as the walking bridge — located behind Sanford Hall, to a trail that will run under the 35W bridge and through a tunnel that connects to 13th Avenue South downtown.

Ward 2 City Councilman Cam Gordon, who represents parts of the University’s area, said the route will give bicyclists and walkers a more “straight shot” from Minneapolis to campus.

While the trail near campus will finish this summer, the city is still in conversations with the University to build a staircase near 15th Avenue Southeast and Fourth Street Southeast to increase the trail’s access to Dinkytown. The city already allocated funding for the staircase, but construction has not yet begun.

The Dinkytown Greenway has been on the city’s agenda for more than two decades, said Peter Wagenius, the policy director in Mayor Betsy Hodges’ office who focuses on city issues like transportation.

After the 35W bridge collapsed in 2007, he said city leaders pushed for plans to connect Dinkytown and downtown Minneapolis for bicyclists and eventually decided to fund the citywide bike-walk trail in three phases.

The Bluff Street Bicycle Trail Project is touted as Minneapolis’ most expensive bike-trail project yet on a per-mile basis.

Gordon said he’s sometimes surprised by the high cost of these types of construction projects but said he feels this bike-walk trail is a worthwhile investment.

“I think that if you recognize it as a part of a network … it does balance out,” Gordon said.

Steve Sanders, the alternative transportation manager with University Parking and Transportation Services, said despite the cost, the project near campus will be worth it because of the large amount of bicycle traffic already in the area.

Hilary Reeves, spokeswoman for Bike Walk Twin Cities, said the program has been monitoring the new trail throughout the implementation of the three phases and use has steadily increased.

University Parking and Transportation Services takes a count of the total number of bicyclists on campus every year, and in 2013, the count was up 13 percent.

Wagenius said he thinks the Dinkytown Greenway will follow a similar trend to that of the Midtown Greenway, which saw increased use with the completion of each segment.

“It’s turned into a jewel,” Wagenius said of the Midtown Greenway. “It has more ridership than 90 percent of people using all Minneapolis streets.”

In order to increase awareness of the Dinkytown Greenway early on, Cordelia Pierson, president of the Marcy-Holmes Neighborhood Association, is working to mark the trail with signage.

“We’ve got to really start investing in bikes and making it a priority,” Gordon said. “If we really want to get people out of their cars and promote biking, [this project is] going to help.”