(Photo by Anna Min) 2,400 people have RSVP’d on Facebook to attend the Black Lives Matter protest at the Mall of America on Dec. 20. More than a thousand protesters rallied last week in downtown Minneapolis.

A Black Lives Matter protest planned for Dec. 20 at the Mall of America hit a snag this week when Mall of America officials threatened to remove any protesters and potentially have them arrested. The protest is part of a national movement aimed at raising awareness about police violence against people of color.

A letter, signed by Mall of America Management, was sent by courier to the homes of several of the organizers, saying that advocates were allowed to protest on the Alpha Business Center Lot, adjacent to the mall, but that any protesters inside of the mall would be subject to removal, as the Mall of America is private property.

According to McDowell, the organizers plan to meet at the MOA rotunda as planned. “We’ll be singing Christmas carols with a twist,” he said. “We’re trying to raise awareness of the epidemic that is going on.”

McDowell got involved with Black Lives Matter in the wake of the Michael Brown case in Ferguson. Black Lives Matter, he said, is not affiliated with an organization, and there are about 10 people locally who are working together “because we decided to collectively use our skills,” he said. 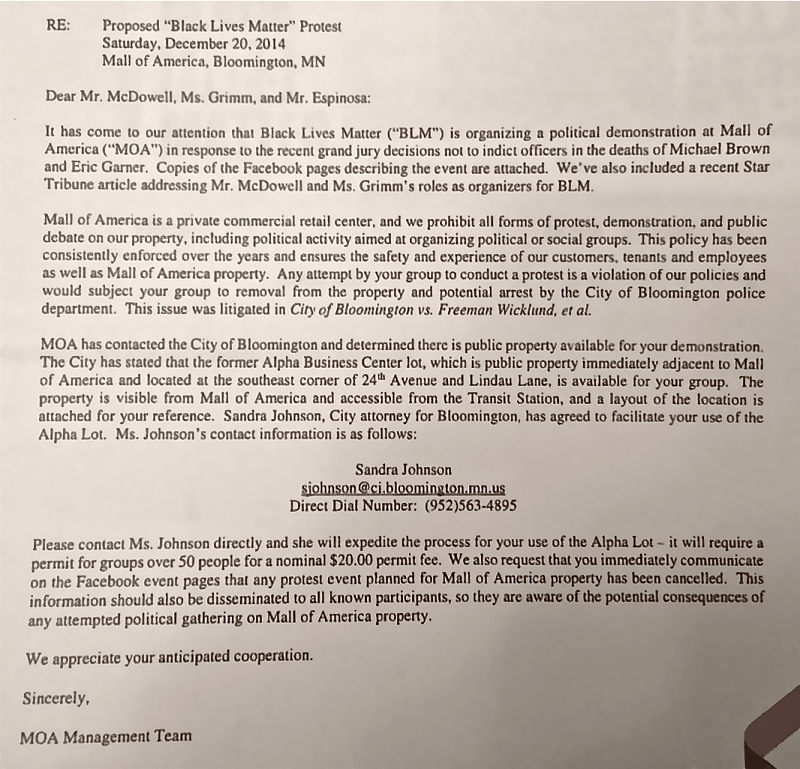 (Above, the letter sent to the three Black Lives Matter organizers from MOA Management.)

According to the Black Lives Matter Facebook page, 250 people attended a training Wednesday night for Saturday’s protest. And 2,400 people have registered to attend the protest.

The Daily Planet contacted the Bloomington Police Department but didn’t receive a response in time for publication.

Sandra Johnson, the City Attorney for the City of Bloomington, said that only organizers who received notification “that they are not welcome” will be subject to arrest. Other protesters will simply be asked to leave, she said. The organizers listed on a press release that would be subject to arrest include Black Lives Matter organizers McDowell and Mica Grimm as well as Nick Espinosa.

Johnson said that the arrested organizers “probably wouldn’t be kept in custody,” but instead their information would be taken and issued a criminal citation. Most likely trespassing, she said.

“This is not the first event that has been planned at the mall,” Johnson said, saying the mall has a set of protocols set up with the Bloomington police, which are not public information. “It’s all kept private because [MOA] is on the FBI list of targets of terrorism,” she said.

Johnson said that while the designated spot outside, adjacent to the mall does require a permit fee of $20, she would most likely pay it herself. Mostly, she said, the permit is so that organizers are sure to know where the location is and how to get to it safely. The permit also gives officials notice of how many people will be there.

While the Minneapolis Police didn’t make arrests at previous Black Lives Matter protests, Johnson said the Bloomington Police Department would react differently for the planned MOA protest. “This is private property,” she said. “The shots are being called by Mall of America… I can’t tell Mall of America that they have to open up private property to protest.”

McDowell said the organizers anticipate a police presence on Saturday, but that he’s “hoping the police will be as cooperative as the Minneapolis police were with protesters,” he said.

As for the demands of the protest, McDowell points to a letter penned by St. Thomas law professor Nekima Levy-Pounds to the Mayor of Minneapolis. In it, Levy-Pounds lists things like addressing police culture, setting up a third-party review structure and seeking community input on issues such as body cameras.

In an interview, Levy-Pounds said she counts herself as a supporter of the young organizers of Black Lives Matter. “There’s a long history and tradition of non-violent peaceful protest challenging unjust laws and raising consciousness of Americans and so these young people are following in that tradition,” Levy-Pounds said. “As St. Augustin said: An unjust law is no law at all.”

When asked what the organizers planned to do in case of arrest, Levy-Pounds said, “We hope it doesn’t come to that.”

Over the years, Mall of America has been a magnet for controversy over the right to express freedom of speech there. Because of its large size, because it’s an indoor location during cold winter months and because of the potential impact with so many visitors especially during the holidays, it’s been an attractive spot for actions such as a 2012 “roundy” held by Idle No More organizers.

A year later at a repeat action, protesters were arrested by Bloomington Police on New Year’s Eve.

In 1997, attorney Larry Leventhal asked Hennepin County District Court Judge Jack Nordby to throw out a case against a group of animal rights protesters, who had been protesting against Macy’s for the fur the company sold, because his clients were excercising their right to free speech in a public space. Part of Leventhal’s argument was the $189 million in public dollars used for the mall’s construction. That ruling was then overruled in a court of appeals.

Prior to the Republican National Convention in 2008, the city of Bloomington worked with the ACLU to come “come up with a plan to balance the rights of free speech with keeping order,” according to a Star Tribune article from that year. The deal eliminated insurance and security deposits that were needed for a permit, which would be required for protests of more than 50 people.

Correction: A previous version of this story claimed the letter sent to organizers was from the Bloomington City Attorney. The letter was from Mall of America management.