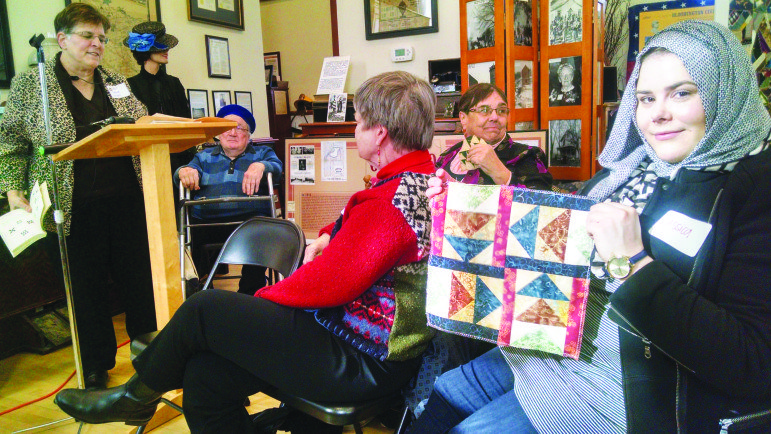 Deb Meyer (at podium) with participants of The Historical Society and the Human Rights Commission of Bloomington Special Presentation on Black History Month. Photo by James L. Stroud

On Sunday, February 22, in honor of Black History Month, the Bloomington Historical Society and the Human Rights Commission of Bloomington, Minnesota invited the public to a free “Special Presentation” on the use of quilts by slaves seeking their freedom via the Underground Railroad. Deb Meyer, from Henderson, MN was hired by the Bloomington Historical Society to present and unravel the mystery behind quilts and the coded patterns sewn on them to guide slaves along the Underground Railroad

The room in Bloomington’s Old Town Hall, 10200 Penn. Ave. S., was filled to capacity with just over 100 people, 90 percent of them women. Besides the MSR writer covering the event, there was only one other African American present. Neither the audience, the Bloomington Historical Society, nor the presenter appeared to see anything amiss in discussing a controversial subject in Black history without any involvement of Black people or others knowledgeable about Black history and culture.

The media announcement and invitation promised that Meyer would offer research on the claims, along with samples of the quilted squares in question. The last sentence of that press release read: “Participants will decide for themselves if the legends are fact or folklore.”

Meyer’s point of reference was a 1999 bestselling book written by sociologist Jacqueline L. Tobin and historian Raymond G. Dobard entitled Hidden in Plain View: The Secret Story of Quilts and the Underground Railway. The book by Tobin and Dobard was inspired by conversations with an elderly African American woman named Ozella McDaniel Williams.

Williams, who was a retired school educator and quilter from Charleston, South Carolina at the time, claimed that through the African tradition of oral history, she was told how quilts made by slaves embodied secret codes and messages that were hung out in plain view on safe houses for fugitive slaves to use as a guide.

Meyer’s Bloomington presentation included information and examples of quilt patterns fromHidden in Plain View. She gave a few examples of what the patterns mean, according to Ozella Williams’ stories to Tobin and Dobard. The “North Star pattern meant to go north. The drunkard’s Path Pattern was meant for the slave to move about zigzag to throw off pursuers, and if a quilt was left in a window, on a fence or a porch, it was a signal for slaves to get ready to escape, a.k.a. the Monkey Wrench Pattern.” Meyer passed around examples of quilted squares throughout her presentation.

In addition to showing examples of the quilts, Meyer referred to Negro spirituals that were used as code messages, songs like “Wade in the Water” and “Steal Away.”

After using information from Tobin’s book, Meyer turned to an article written in March of 2003 for Traditional Quiltworks magazine that disputed any notion of a secret code used by slaves. This was the basis for Meyer’s sidebar comments referring to Tobin’s book as “bunk.” It was also the extent of Meyer’s research for the presentation.

The MSR spoke with Meyer about her preparation, research and resources for the presentation. Asked about her credentials, Meyer referred to herself as a non-historian and non-expert on the Underground Railroad, quilted secret codes by slaves, slavery and history in general. Furthermore, Meyer repeatedly stated that she only used as references for her Black history presentation two books on the subject and the Quiltworks article.

The MSR asked Meyer if the purpose of the presentation was to cast doubt over the historic accuracy of the Tobin and Dobard book. “Well, when I first gave these presentations, I had not read any of the controversy about it. I heard that there was [controversy], so first I related it as…historical fact, as I understood it from the reading of Eleanor Burns’ book on quilting. Then I was giving this information out to a quilter and she said it wasn’t true. The last time I gave the presentation, I said we don’t know for sure if it’s true.”

The MSR asked Meyer what local or national historians she had spoken with in preparation for the presentation. “No one,” she answered. “What I did, this was for me. I thought it might be a nice, interesting presentation for my church ladies’ group. I presented for a few assisted living centers. Then I was asked to do this today.

“I said to [the Bloomington Historical Society], ‘I’m not an expert in this. I don’t really know anything about what I read here.’ I told them that. ‘However, I made some quilts, and if you want to hear what the codes are, I can do that.’”

The MSR asked Larry Granger, president of the Bloomington Historic Society, why Deb Meyer had been hired for this program when she had informed the Historical Society she knew nothing about what she read and wasn’t an expert on it. Mr. Granger answered, “Number one, she was handy.”

Asked who had the final say on hiring Meyer to present for the Black history program, Granger said that would be him. The MSR asked if Meyer was compensated for her time and if the event’s co-sponsor, the Bloomington Human Rights Department, contributed to that payment. He said Meyer was compensated but the Human Rights Department was a sponsor in name only, “because we do programs together all of the time. We just wanted to include them.”

After the program, while in the parking lot, two event participants, Marsha and Nadine of Bloomington, shared their thoughts about the presentation. Marsha said, “I kept thinking, I believe in oral histories and letting Black Americans’ oral histories answer a lot of those questions. I thought she should have done better research.”

Had the question of credentials not been brought up during the event, Marsha said she would have left that day thinking that Meyer was an expert. In fact, the Bloomington Historical Society and Bloomington Human Rights Department gave the more than 100 people who attended the “Special Presentation” every reason to believe they were learning Black history from an expert on the subject.