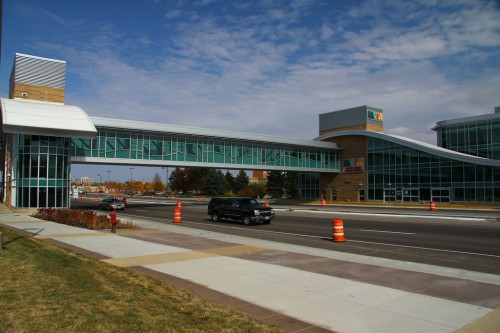 The Twin Cities is welcoming a new transit service on Saturday: The METRO Red Line bus service along Cedar Avenue from the Mall of America in Bloomington to the eponymous Apple Valley Transit Station. The 10-mile route will have five stops: Aside from the endpoints, it also hits Cedar Grove Transit Station at Nicols Road and Cedar Grove Parkway in Eagan, and two additional stations along Cedar Avenue in Apple Valley near 140th Street and 147th Street, respectively. The route will have 15-minute headways between buses from 5 am to 7 pm on weekdays—It almost qualifies as a member of the region’s Hi-Frequency Network, but falls short on Saturdays where frequency is only every half hour (Hi-Frequency routes are supposed to have 15-minute Saturday service from 9 am to 6 pm).

Have you gotten that sinking feeling yet?

The Red Line, formerly known as the Cedar Avenue Bus Rapid Transitway, has been championed as a pilot of BRT service in the Twin Cities. BRT, of course, is often brought out as an alternative for potential rail projects—usually light rail or subway/elevated “heavy rail”, but sometimes an option against commuter rail or streetcar service. It was a technology born out of necessity in poor Latin American countries. City planners sought out ways to optimize their disorganized bus systems (which often were—and still are—run by a number of independent companies) rather than building expensive railways. It is a technology which has since spread around the world.

BRT was invented when dedicated busways were combined with specially-designed stations which matched the buses’ floor height, allowing level boarding. The stations also allowed passengers to use the normally wasted time in between buses to purchase tickets ahead of time. The buses themselves were usually articulated (sometimes double-articulated), with a larger number of wider doorways—in some cases on the “wrong” side or on both sides of buses so that boarding platforms could be constructed in the center median of a busway.

Unfortunately, as the idea of bus rapid transit spread, it was often watered down—especially as implemented in the United States. Proper dedicated lanes terminate before reaching congested areas. Routes get implemented with unnecessary loops or one-way sections. Pre-paid boarding gets cut, requiring passengers to waste time fumbling for cards, bills, and change as they step onto the buses. The Red Line has not been immune from those trends.

First, it is difficult to say whether the Red Line has a dedicated busway or not—strictly speaking, I would have to say no. Buses will travel in the right-hand shoulder lanes, an extension of the of bus-only shoulder program that has been implemented on 300 miles of roads across the Twin Cities. Buses will have to deal with right-turning vehicles sharing the surface segment of Cedar Avenue through the heart of Apple Valley. The route has implemented transit signal priority at intersections, which should help keep traffic flowing, but there will still be turbulence in places where cars and buses share space. The freeway segment of the route has a speed limit of 65 mph, and buses also have to mingle with regular traffic at on- and off-ramps. 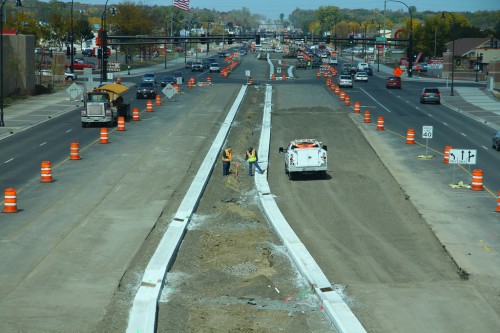 Cedar Avenue is very wide now, able to maintain a 2+1+2 configuration even with half the road surface under construction. (Photo: Mike Hicks)

Second on my list of Red Line issues is station placement: The Cedar Grove station is only accessible via surface streets, adding 3 minutes or more to northbound trips and at least 5 minutes to southbound trips. New ways of accessing the station are undergoing a year-long study process, but it’s not clear when this major defect will be fixed. To the south, the 140th and 147th Street stations are being opened without any skyway connections across the wide highway, unlike AVTS as seen in the first photo, and they are not well located right at intersections with crosswalks. Other potentially valuable stations are completely missing, such as one which had been proposed at the Palomino Hills park-and-ride, one of the more densely-populated residential nodes along the highway which could benefit from better access to commercial zones along the route.

Another component that’s currently missing is off-board pre-payment. The Apple Valley Transit Station has ticket vending machines (TVMs) installed for the start of service, but they are not yet installed at the intermediate stops along the route, and the Mall of America stop seems to be relying on existing machines used for the Blue Line (Hiawatha LRT). Ideally the Red Line will soon behave just like the Blue Line, where everyone onboard must carry a transfer or validated pass as proof of payment. However, it appears the line will require to pay or validate their fares upon boarding until machines are deployed to all stops.

The Red Line is an interesting experiment in the effort to make bus service better. While significant pieces are missing, fixes are at least in the pipeline. We’ll see how long they take to arrive. The biggest challenge of all will involve finding new ways to overcome the suburban geography of the route, where pod-like developments are spread through the square-mile sections laid out by surveyors in the 19th century. Will this type of busway offer a way to balance out the natural tendency of car traffic to pile up along section-line roads?

It is worth noting that express bus service in the corridor has been expanding for several years already, to destinations including downtown Minneapolis, downtown Saint Paul, the University of Minnesota, and the Mall of America. The Red Line offers the first true station-to-station service along the highway, consistently making the same stops throughout the day.

Here’s a breakdown of the corridor’s $112 million budget:

Check out my Flickr set of Red Line photos. Are you planning to try the Red Line? Let us know in the comments.