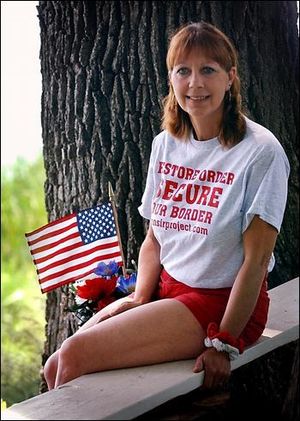 Despite evidence that immigration from Mexico has begun to reverse, internet chatter suggests that Minnesota’s perennial xenophobes Paul Westrum and Ruthie Hendrycks are gearing up to once more stress the panic in Hispanic.

The sharp downward trend in net migration from Mexico began about five years ago and has led to the first significant decrease in at least two decades in the unauthorized Mexican population. As of 2011, some 6.1 million unauthorized Mexican immigrants were living in the U.S., down from a peak of nearly 7 million in 2007, according to Pew Hispanic Center estimates based on data from the U.S. Census Bureau. Over the same period, the population of authorized immigrants from Mexico rose modestly, from 5.6 million in 2007 to 5.8 million in 2011.

One would never guess these facts exist if looking at the world through the eyes of Southern Minnesota’s most prominent anti-immigration activists, Ruthie Hendrycks and Paul Westrum. It’s still high shriek for them.

After months of relative quiet, president and chief retailer Minnesotans Seeking Immigration Reform (MinnSIR) Hendrycks is posting regularly again at Protect Our Borders Now, sometimes four or five times a day. Always subtle with her use of metaphors, Ruthie believes that the Pew Report is “difficult to swallow.”

Hendrycks is also head of the MN FIRE Coalition and the Independent Minnesota Minutemen.

News reports aren’t yet in, but Paul Westrum’s Minnesota Coalition for Immigration Reform (MCIR) held an open house last night at Albert Lea’s American Legion Club. MCIR, which believes in reducing all immigration–however documented–to a mere 200,000 per year, is back to the old trick of hijacking sustainability arguments of the environmental movement.

Westrum wrote in Immigration group to hold meeting, a letter to the editor of the Albert Lea Tribune:

Sustainability is maintaining our quality of life from generation to generation. Given present trends, our population will increase from 305 million today to 433 million in 2050. Immigration will account for 82 percent of the growth. Such huge and rapid growth will place a huge burden on our infrastructure and natural resources.

The Minnesota Coalition For Immigration Reduction will hold an open house meeting at 7 p.m. Tuesday at the American Legion Club in Albert Lea. If you agree with us, you are invited to attend our meeting. Hope to see you there!

Will the right once more use immigration politics as a wedge in the 2012 elections? And will voices like Hendrycks and Westrum provide the full-throated scream for Minnesota Majority’s dogwhistled fear of undocumented voters as photoID heads to the ballot this fall?

Whatever the case, Westrum is maintaining both message control and high production values with MCIR’s latest video, released two months ago:

This masterpiece nearly matches the Youtube MCIR released that includes Neo-Nazi Sam Johnson, recently indicted on weapons charges after being a subject of a federal investigation of domestic terrorism, yelling at people at a Centro Campensino praying for God’s help in resolving immigration issues: