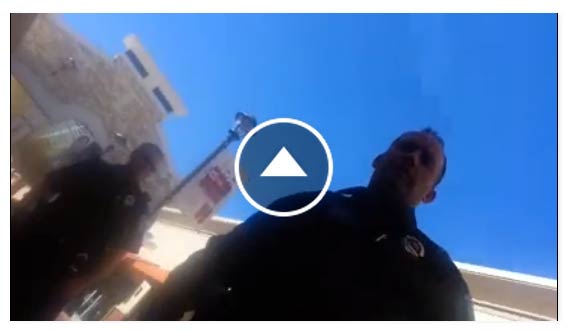 Still from a video of police interacting with Art Haggins and others at an Twin Cities Premium Outlets in Eagan.

A viral video that shows four African-American shoppers being accused of theft at the Twin Cities Premium Outlets in Eagan has caused anger and outrage and sparked accusations of racism of mall personnel and of Eagan police.

It’s not clear what led up to the point when the four shoppers at the mall were surrounded by police and mall security, but the feeling of the four is clear – they say it is an obvious case of racial profiling.

The video, which was posted on March 11 to social media by one of the accused, Art Haggins – just hours after the stop happened – shows police questioning the shoppers in the mall courtyard about possible stolen items. According to Haggins, the group was accused of stealing $11 worth of makeup from the Makeup Outlet. Police said they were called by an employee in the mall who accused the group of shoplifting. The group was searched and showed receipts for all of their purchases and even at one point in the video it shows the contents of a purse scattered on the ground. Haggins said the contents scattered from his girlfriend’s purse as an officer pulled the purse away from her. In the video at least six Eagan police officers can be seen questioning the shoppers. According to Haggins there were at least two additional Eagan police officers on the scene.

“I felt embarrassed, mortified … insulted,” said Haggins. “I really had to practice my anger management skills. They searched all of us, they searched my 13-year-old daughter and they even made my girlfriend take off her shoes.”

Haggins said there was absolutely no reason for the group to have been singled out other than the color of their skin.

“I mean we were there to spend money. We shopped in a few stores. We even bought some stuff from the makeup store,” said Haggins.

According to Det. Desiree Schroepfer, the spokesperson for the Eagan Police Department, the incident was handled appropriately even though the call was for minor shoplifting – an accusation that turned out to be unsubstantiated.

“There’s no such thing as a routine call and with the number of suspects the response was warranted,” said Schroepfer, who said they were called out by a mall employee.

Although the search of the individuals yielded no stolen items and no arrests were made, Schroepfer said it doesn’t mean a crime did not occur.

The outlet mall opened for business in August of last year and since its opening Eagan police have been called out on close to 870 calls with just under 140 of those calls being for theft. Schroepfer said she did not have statistics on the ethnicities of those accused of committing crimes at the mall as the department does not breakdown reports by race. She also did not have the statistics for how many called were substantial enough for an arrest to have been made.

Angered by the stop, one of the accused is heard on the video saying she wanted to return to the store from which they were accused of stealing so they could get their money back for items purchased, but as seen on the video – which has been viewed more than 170,000 times – the group was told by police that they were no longer allowed anywhere in the mall or they would be arrested for trespassing. Officers said the mall had the right to determine who could be on the grounds, as it is private property. Since the video has gone viral mall officials have said the group is again welcome at the outlet, but according to Haggins none of the group has been contacted by mall officials or by police.

“We were embarrassed for no reason and I definitely want to take action,” said Haggins. “You can’t treat people like that no matter what color they are.”

Since the video Haggins posted has gone viral at least two African-Americans have come forward with claims of being harassed and racially profiled by the mall and Eagan police.