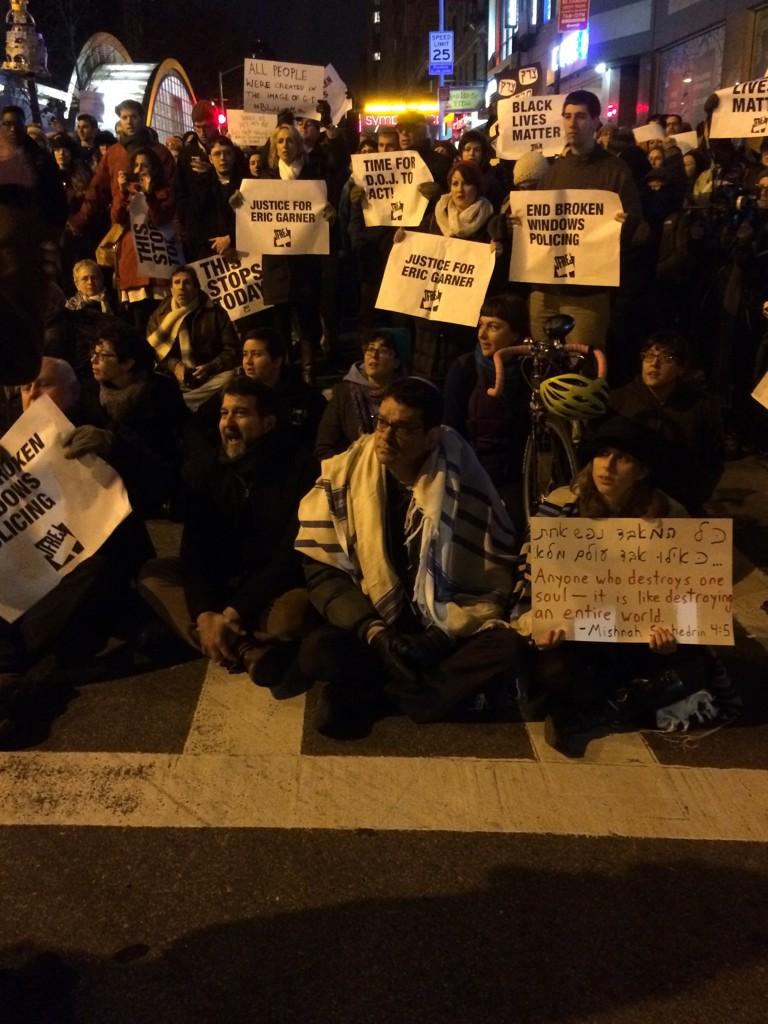 On November 24th, a grand jury in St. Louis County, Missouri announced that they would not indict the white police officer who shot and killed Michael Brown, an unarmed 18-year-old black man. Less than a week later, a grand jury in New York decided not to indict a white police officer who killed an unarmed black man named Eric Garner with an illegal chokehold, in front of witnesses and video cameras. Protests and actions have ensued.TC Jewfolk asked me if I’d like to write something about how we should feel and react as Jews.

I work for Jewish Community Action, an almost 20-year-old nonprofit organization using community organizing to build a strong Jewish voice for racial and economic justice in Minnesota. In my staff role, I’m often asked to explain why we believe Jews should care about issues that are not, at face value, “Jewish issues.” In 2011, I wrote here on TCJewfolk about why marriage equality is a Jewish value. Earlier this fall I wrote for Zeek, explaining why Jews should care about the disenfranchisement of millions of convicted felons.

I’ll be direct: this is a Jewish issue. Racial violence is a Jewish issue, even when Jews are not directly involved as victims or perpetrators. Instead of telling you how Jews should feel, I’ll tell you what you should know. You should know that recent studies show that a black man or woman is killed almost daily by law enforcement. Black offenders are more likely to be convicted and serve longer sentences than white offenders, and since the majority of black men in prison are there for drug-only offenses, you should know that while black youth are far less likely to use drugs than their white counterparts, they are 10 times more likely to be arrested for it.

Instead of telling you how Jews should feel, I’ll tell you to read what black Jewish blogger MaNishtana wrote about what side Jewish Americans should take on Ferguson. You should read about Rekia Boyd, who was killed by an off-duty police officer in Chicago. You should read about Tamir Rice, the black 12-year-old shot and killed by a police officer who thought the boy’s toy gun was real, and you should read about how widespread gun ownership has created a climate of fear and led to an increasing number of police shootings. If you are caught up in details about what Eric Garner was doing when he was apprehended or whether Tamir Rice’s parents should have let him play with toy guns, you should read Black Girl Dangerous’ list of things to stop being distracted by when a black person is killed by the people entrusted with all of our safety.

At an act of civil disobedience in New York City last week, Rabbi Jill Jacobs of T’ruah: The Rabbinic Call to Human Rights, said that “As Jews, we believe that every human being is a creation in the image of God. We must then protest when the people charged with protecting us see some of our lives as dispensable.” JCA believes, and I believe, that it is our inheritance and responsibility to repair the broken world. As long as we are participating in a system designed to dehumanize black people to the extent that their deaths be deemed justified, the world is still profoundly broken and we must keep working.

I won’t tell you how to feel about that, but I’ll tell you to read what Paul Gorski wrote about how no matter what we feel, no conversation about Ferguson should be about protecting the feelings of white people. I won’t tell you what to feel or that we should all be feeling the same thing. Change will not be made by feeling together; moving forward is about acting together, what we do collectively at this moment.

I will tell you how I think Jews should react, because if we are all created in the image of God, my destiny is bound to yours. What happens to you matters to me. Black lives matter to me, and how Jews react to that matters to me. Our shared humanity is at stake. And I’m speaking specifically to white Jews, like myself, because we know that there are Jews of color who experience this issue differently.

As white Jews, many of us want to take action, to do something to protest a system that deems some lives dispensable. JCA believes there is no greater way to do this than by acting as allies in solidarity with people of color. Black people, most of them young, are building a movement, they are leading the way, and our job here is to show up and to stand behind and alongside them.

What does it mean to be an ally? In the context of our history of oppression, we must work to understand our own privilege and question how we benefit from a system that continues to oppress so many. Listen to and believe the lived experiences of people of color. Speak out without placing our voices at the center of the conversation. We will get a lot of this wrong more than once, and we must acknowledge that and work harder when we do. We need to keep at it, to show up and be allies. We must be present consistently, especially when it’s difficult. And we must work within our community to have tough conversations, to support each other, and to hold one another accountable.

Jews in the Twin Cities have an opportunity to show up as allies right now and support work that has already begun. Start locally: follow Black Lives Matter Minneapolis on their Facebook page and on Twitter. Text @blacklives to 23559 for updates and upcoming actions (organizers say text is the best way to stay informed).

Jewish Community Action will continue to organize our community for racial justice; follow us for updates as we coordinate with our allies on a national Jewish response.

(Photos courtesy of Jews for Racial and Economic Justice.)