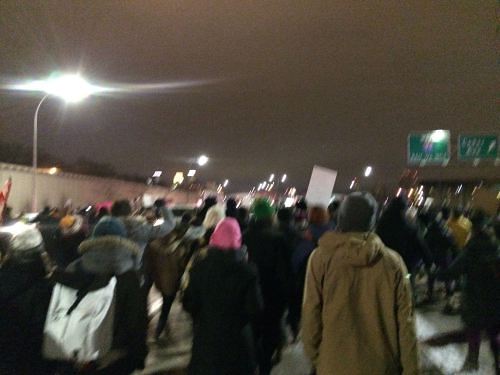 As one grand jury after another refuses to indict police who have killed black men, #BlackLivesMatter protests continue across the United States. I marched on November 25, missed Saturday’s MOA protest, and will probably march again. Like many people, I keep hearing the same questions on Facebook and from friends and family. Before the next family gathering, here’s my short question-and-answer.

A police officer shot an unarmed Black teenager, Michael Brown, in Ferguson, Missouri in August. The grand jury failed to indict him.

“On July 17, Ramsey Orta was talking to his friend, Eric Garner, about where to eat dinner — Friday’s, maybe, or Applebee’s. They eventually decided on Buffalo Wild Wings, but Garner never made it. Soon, a fight broke out nearby, Orta says, and after Garner helped break it up, New York Police Department officers on the scene accused Garner of selling untaxed cigarettes and attempted to arrest him.”

Police kill a disproportionate number of Black men every year, across the United States. Grand juries indict almost everyone that prosecutors bring before them — except police officers.

Police racism is a fact, as is institutionalized racism across American society. For good descriptions and analysis, read Ta-Nehisi Coates on The Secret Lives of Inner-City Black Males and some of the hundreds of analyses of racial disparities and discrimination in hiring, in housing, in the criminal justice system.

Why #BlackLivesMatter? Don’t all lives matter?

#BlackLivesMatter protests the institutionalized racism that says over and over, in schools and health care systems and on the streets, that Black lives do not matter, that they do not count the same as white lives.

Of course, all lives matter. But the focus of the protests is the massive disregard and disrespect of Black lives, particularly as evidenced by the treatment of Black people in the criminal justice system and shown so dramatically and tragically in the treatment of Black people by police. For examples, see the stories of Henry Davis or Levar Jones or Henry Walsh or Dontre Hamilton. And it’s not just Black men — Black women, too, are assaulted and killed by police.

What can demonstrations accomplish?

Demonstrations can help to focus the attention and awaken the consciences of a nation. That’s how the civil rights movement worked in the 1950s and 1960s. When police and others in the South beat and jailed and killed Black (and some white) men and women and children who protested the then-legal system of segregation, the attention of the nation was focused on the evil system of laws. The Civil Rights Act of 1964 and the Voting Rights Act of 1965 were direct results of demonstrations and protests.

The protests now focus on changes in police culture and practice, so that violence is not the first resort when police interact with Black people — or anyone.

What about Saturday’s Mall of America protest?

The Mall of America has allowed many peaceful gatherings that were far larger than Saturday’s #BlackLivesMatter protest. This time, they said no.

“Recently, thousands of people gathered in the rotunda of the Mall of America to publicly demonstrate their sadness over the untimely death of a young man [Zach Zobiech, who died of cancer]–a death that’s symbolic of a larger problem they hope society will act to solve.
“Nine days later, a crowd about half the size gathered in the Rotunda for a very similar purpose–to sing, chant, and raise their arms and lie on the floor for a few minute to protest the needless, racist killing of young people of color. The second group was met by riot police who, supposedly to protect “safety” locked customers in and out of stores, shoved employees and Mall customers around and generally created fear and havoc.
“Now maybe it’s within the rights of a private business to be against cancer and for police brutality (or at least against any public objections to it). But a truly private business like that ought to repay the hundreds of millions of dollars in public subsidies it has received and pay the cost of the police used to enforce its views out of its own revenue, not our tax dollars. And it cannot claim with any honestly that its concern is “safety.”

Whelan wrote that he “would very likely have ended up going out to dinner at the Mall if legions of riot cops had not insisted we leave. My family was at both events, by the way, which is how the comparison occurred to me.”

The Bloomington city attorney announced today (December 23) that she’s planning to file criminal charges against organizers of the MOA protest, and will seek restitution for the mall’s lost business and for the costs of police, who were brought in from “as far away as Hastings and Red Wing,” according to a CBS report.

Outrage swept across the Twittersphere, with Tweets from across the nation and even Canada denouncing the city attorney’s plan. Dr. Nekima Levy-Pounds collected some of the responses in a Storify, noting that, “Others have decided to implicate themselves in the “conspiracy” to engage in a peaceful demonstration by demanding that they also be charged for participating in the protest, whether present in person or in spirit.”

1) We ask that supporters urge the following contacts not to pursue charges, wasting more public money protecting profit over people:

3) You can also tweet #‎ChargeMeToo‬ @MallOfAmerica and @Bloomington_MN to support the “protest organizers” threatened with charges.

Business
Mary Turck
Do NOT follow this link or you will be banned from the site!
X