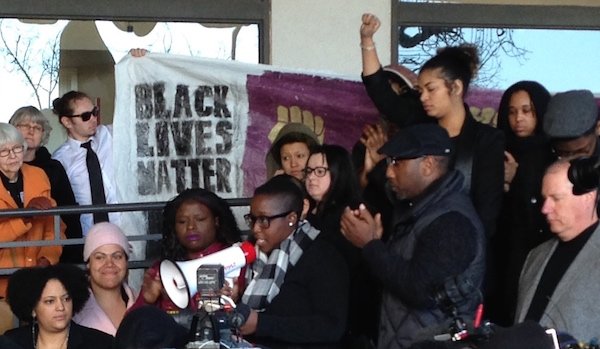 On the day of the first court hearing for the 11 defendants who are accused of various charges around the planning of the December Black Lives Matter protest at the Mall of America, Minnesota’s Black Lives Matter group is calling for a boycott of the Mall, through July 1st. The news comes a day after the group sent out a press release revealing that Bloomington City Attorney Sandra Johnson had exchanged emails with the Mall of America, offering advice.

The 11 defendants are accused of organizing a demonstration at the Mall of America over police violence against the Black community. City Attorney Sandra Johnson is seeking $40,000 in restitution for police overtime and lost revenue.

On March 9th, Black Lives Matter announced that they had obtained emails between the Mall of America and Bloomington City Attorney Sandra Johnson, which “show disturbing levels of coordination between the City of Bloomington attorney’s office and officials with the Mall of America,” according to a press release. The emails were obtained through a public records request by Tony Webster, according to a statement by Johnson, who did not respond to a request for an interview for this article.

The emails reveal that the Mall officials were pushing the city attorney to pursue more serious charges, and Johnson offering advice to the officials. In one email, Kathleen Allen, Corporate Counsel for the Mall of America said, “i’m concerned that if these other charges don’t carry greater penalties than a trespass charge, we’ll be in the same position as last year.”

In another email, Johnson encouraged the Mall to continue surveilling the organizers through social media. “Please document all the social media and video feeds on social media concerning the event,” she said in the email. “The groups are very likely to take these sites down when they hear that we intend to prosecute them. That’s likely to air tonight. My office cannot do that — it would require us to be witnesses in our own prosecutions.”

Chuck Samuelson, Executive Director of the ACLU, which will be representing some of the defendants, said that his organization has problem with the City of Bloomington overcharging the organizers. He said he didn’t believe it’s ever happened in Minnesota before that protesters would be forced to pay for riot police. “I’m shocked that there’s no boycott of the city of Bloomington,” he said.

Of the emails that were revealed between Sandra Johnson and the Mall of America, “we expected something like that could come out.”

Nekima Levy-Pounds, one of the 11 people charged and a law professor at the University of St. Thomas, says that she wouldn’t necessarily say that Sandra Johnson’s emails with the Mall were illegal, but “it causes us to question of independence of the prosecutor,” she said. “It gives the impression that Sandra Johnson is more interested in supporting the billionaire owners of the Mall of America than the taxpayers of the city of Bloomington. It’s a waste of time and resources.”

According to Levy-Pounds, originally there were 10 organizers that were charged around organizing the protest after the event, in addition to the 25 people who were arrested at the protest. An 11th person, Pamela Twiss, was charged after she sent a letter to the prosecutors asking them to drop the charges.

Additionally, one person, Nick Espinosa, who has not been given any charges, had his social medai accounts subpoenaed.

The court hearing on March 10th, which lasted less than 10 minutes, set the date for the next hearing which will take place on May 1st. Defending against the City of Bloomington attorneys, six lawyers will represent the 11 defendants. According to several of the defendants, all are planning on pleading not guilty.

Over 200 people showed up for the March 10th trial in support of the organizers, although only a fraction were allowed into the court room. One of the supporters, artist Junauda Petrus, says that she was there to support the organizers and had been to the Mall of America protest with her nephew.

“They make you feel like doing the right thing is wrong because it has to do with money, when really blood is in the streets and it’s young black bodies,” she said. Of the organizers, she said: “They are beautiful, amazing, dynamic, brilliant, hilarious, profound young people. They should be absolutely supported- not these corporate giants that if they were on the right side of history they would have brought coffee and donuts to everybody that came to resist instead of hiring riot police.”

Kandace Montgomery, one of the 11 organizers charged, said before the hearing that she felt grateful for all the supporters, but that she felt frustrated and angry that the city of Bloomington was using taxpayer dollars to prosecute herself and the other organizers. “My great grandmother was a sharecropper,” she said. “That her great granddaughter is still dealing with the systemic murder of black people is a huge problem. I don’t feel my great grandmother would be proud of our country, but I do think that she would be proud of me and all the other black organizers that are stepping up in a real way that we have justice in this country.”

Larry Leventhal, one of the lawyers representing the defendants, said the individuals were exercising their right to free speech in a public place. “The charges are outrageous and the attempts to gain money from for unneeded security is ridiculous.”

At a press conference after the hearing, organizer Mica Lauren Grimm, one of the 11, said, “We can sit here and talk about public vs. private property all we want, but we know what this case was about- racial profiling. If this was about private property, they wouldn’t have cops infiltrate our meetings.”

Following the hearing, Black Lives Matter announced a boycott of the Mall of America until the charges are dropped.