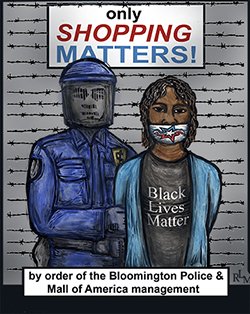 In the dock are eleven Black Lives Matter activists fingered by police as the “ringleaders” of a peaceful rally at the Mall of America last December. An additional 25 have been charged as lesser accomplices. The potential ramifications of the case extend far beyond what the formal charges of illegal assembly, disorderly conduct and trespassing would suggest. The city attorney prosecuting the case insists that the substance of the rally – racist police killings of Black people – is not relevant or connected to the legal matters at hand. She could not be more wrong.

The Civil War that wracked this country in the mid-nineteenth century was supposed to settle whether Black lives or property rights mattered more. A significant segment of the white public, including business interests in agriculture, real estate, banking and other sectors, have worked tirelessly ever since to prevent the realization of its verdict. In the fifteen decades since the war ended the nation has been subject to two parallel processes that continued to shape its development. The first is a succession of practices and policies designed to maintain the racial caste system (“wars” on drugs, crime and broken windows, etc.) while keeping white people in ignorance. Dual sets of practices in policing, hiring, customer service, access to property, education, credit access and social status, triggered by skin color, shape our life prospects from before we are born. The second is the systematic withdrawal of constitutional rights from the populace, especially poor and working people, and their transfer to the owners of corporate property. It is no coincidence that the same Supreme Court that eviscerated the Voting Rights Act (the main protection against Jim Crow practices in elections), awarded legal “personhood” to corporations (green-lighting their full-press takeover of the electoral process).

Modern policing – born of the Virginia “slave patrols” – was consolidated in the post-Reconstruction era to manage the mass incarceration of Black people. “Black Laws” were devised that made an assembly line out of convicting and leasing them out to plantations and corporations as re-enslaved labor (a practice continued into the 1940s). Local police forces operated in league with the extrajudicial Ku Klux Klan to enforce Jim Crow, a regime of fear and violence which defined southern race relations for eighty years.

The line between government and corporate power has become blurred as regulatory departments, legislatures and repressive agencies have become instruments for dismantling of impediments to profit making – such as environmental, labor and democratic protections. Recent exposes reveal that pro-democracy movements (Occupy, anti-fracking, anti-war) are being targeted for disruption by federal and local police in close collaboration with corporate security departments. In the commercial arena, retail, entertainment (and now medical and other services) have been migrated from the public square into the shopping mall – an enclosed private park where the tiresome Bill of Rights need not apply.

Like it or not, Bloomington City Attorney Sandra Johnson has taken her place in a deep-rooted historical conflict – and on the wrong side. When she claims that her job is to “uphold the Constitution and the law,” she is seemingly unaware of the contradiction. Laws are being mass produced by corporate think tanks with the intent of nullifying the democratic elements of the Constitution. As a functionary of the system she must choose to uphold either the Constitution or the new legal regime. History does provide models of courage in this regard. Some states, for example, refused to implement the Fugitive Slave Act – an 1850 measure legally enforcing the supremacy of property rights over Black lives – even when it was upheld by the Supreme Court.

Today, by comparison, there is no faction of the elite serious about dismantling police power. That leaves it the movement to revitalize the betrayed promise of Emancipation and establish the primacy of human rights. It is not likely that this will be achieved by changing the minds of officials, at least in the near term, but it is possible to change their calculation.

Publicly, prosecutor Johnson poses as a simple servant of the law. “Civil disobedience has its price,” she shrugs, as though she were imposing a fine for a zoning violation or a traffic ticket. In her private messages to Mall executives, however, she sings a different song. “It’s important to make an example out of these organizers,” she explains, “so that this never happens again.” This case is not about the civil price of protest, it’s about making that price unbearable. And her concern is not just for the Mall. The “assailant” she says (this is how she refers to peaceful demonstrators), “may not assault this victim again, but [they] might assault another victim … the most effective way of deterring future criminal conduct is to go after the organizers, the ringleaders.” This is government as an institution defending business as a class against protest as a right.

You can’t say stuff like this publicly, of course. The massive police show of force on December 20th – and the police-ordered closing of businesses – requires a more acceptable explanation. Without offering evidence the prosecutor alleges that the rally that day “was a powder keg waiting for the match.” This is the institutional version of “I feared for my life,” the police pretext for everything. There may be no evidence of an actual threat but the mere presence of Black people not doing what they are told is enough to justify preemptive aggression.

With their informants present in the organizing meetings, the authorities were certainly aware of the disciplined and peaceful nature of the rally plans, planning that bore fruit in the festive, multi-generational gathering in the Mall rotunda. It may be that shutting down the stores was necessary for the police to justify their over-the-top presence.

A common FBI practice during the COINTELPRO era of the last century was to feed alarming – but fictitious – “intelligence” – to gullible local police departments to get them to deal harshly with movement activism. In the post-9/11 world they cloak their long-standing war against dissent in the disturbing language of “domestic terrorism.” Protest activities are rated according to their “terrorist threat level” and terrorism experts are assigned to advise local officials (who get so excited to be invited to defend the homeland). When the police tactics inevitably backfire, the municipality is the one stuck with the bill. Given the feds’ historic paranoia about Black-led organizing, it is no surprise to find their scent wherever it raises its head (the FBI was constructed under the strict management of J. Edgar hoover, a fierce Virginia white supremacist who once had every Black newspaper in the country under surveillance). FBI Joint Terrorism Task Force apparently passed along an unsubstantiated rumor about possible vandalism to the Bloomington police, who panicked accordingly.

While the city attorney may have an instinct for career advancement, the Mall of America is more concerned with its public image. It rebuffed Johnson’s plea to prosecute Mall retail workers who supported the rally, or at least ban them from the premises to (as Johnson put it) “send a good message to all persons employed at MOA… Future demonstrations cannot be tolerated.” The MOA wisely dropped its demand that the activists pay “reparations” for lost profits, an indication that it would prefer a lower profile. Bloomington is still seeking reimbursement for police costs.

Repressive overreach against grassroots movements usually backfires, encouraging further mobilizations and arousing broader popular support. City Attorney Johnson – apparently unschooled in the dynamics of non-violent movements – is placing the Mall of America in an untenable position; one that could have serious repercussions for her career and for the Mall’s global brand.

In my next piece I will explain how.