Black Friday. It’s worth $59B in sales this year, if you believe the projections. More important, it’s a cultural and social reference point, the day when the Holiday Shopping Season officially starts.

But Black Friday is really a state of mind.

The psychology of the day is what matters most, as the excitement and crowds fueled by a small number of loss leaders gets people to spend far more than they otherwise should on other not-so-great deals in the stores. That’s how shoppers are manipulated by a system that sees them as nothing more than pawns to be used up on a game where the take on one day is really just a way of keeping score.

In 2012, there was an organized effort to boycott WalMart as the symbol of everything that is wrong. Their relatively low wages and big presence make them a very reasonable target for political action. This year, they are not doing very well and are sizzling up their competitive juices like the turkey drippings that so many of their workers won’t have time to enjoy. 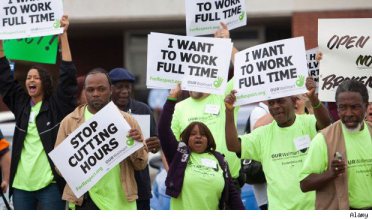 Right: WalMart, the most visible target for action.

That brings us to the first part of the Black Friday psychology – the competitive pressure to perform on this one day. It comes largely from Wall Street, which is used to using rough metrics to gauge how the bigger picture is going. It’s a silly measurement in a rapidly changing world, but WalMart is wedded to the old ways and old measures. Consider this quote: 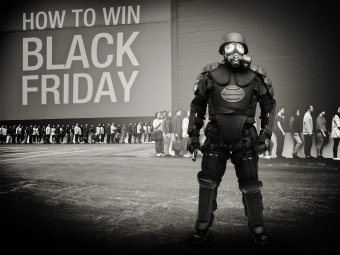 Left: It’s the industrial and military precision that makes Black Friday everything it is.

Who is the competition? Anyone. When ToysRUs featured the game Monopoly in its ads, WalMart cut the price to a measly $5 – and started advertising it.

They can do this because it’s part of a bigger strategy called a “Loss Leader”. Most of the great deals advertized on Black Friday are very limited. Only a small number of highly visible, advertized goods are priced to be extremely good deals.

This gets us to the next part of Black Friday psychology – the consumer frenzy. It’s well know that people who are jumpy and excited are in a buying mood, spending far more than they would if they felt relaxed and satisfied. The key to Black Friday is, indeed, the excitement and desire to not “miss out” – on top of the usual retail strategy of making customers feel inadequate.

“Consumers make poor decisions when they’re under duress, and this is most obvious on Black Friday,” according to Matthew Ong, senior retail analyst at online personal finance company NerdWallet Inc. It’s a well known psychology that big stores set themselves up to take maximum advantage of. If you don’t believe a consumer advocate, check out this advice from retailing supplier Lavi Industries:

Impulse purchases are the key to a profitable loss leader. That means you want the foot traffic to enter your store and spend time there. Don’t place your loss leader in the front of the store – place it in the back of the store. Set up a merchandising strategy to capture the attention of the shopper and inspire impulse purchases along the pathways. 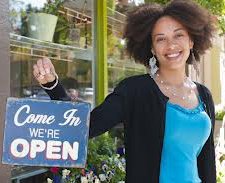 Left: Small businesses have been hiring much more rapidly

But there is one more part of the psychology of this day that may become more important this year – the backlash. Nielsen forecasts that only 13% of all shoppers plan to go out, down from 17% last year. Online purchases will call to 46% of all shoppers, up from a miniscule 30% last year. Consumers have apparently decided that the rush and madness isn’t worth it after all.

The backlash will likely mean that at the end of the first weekend of shopping the retail reports will be dour. But one weekend does not make the season, at least not any more. That measurement that people in far away Wall Street depend on may be utterly antiquated.

The psychology of Black Friday is driven by the desire to measure the entire holiday season by its first day – and the corresponding response by retailers to goose that stat as much as they possibly can. This fuels the psychology of utter madness that is heavily calculated and designed to separate as much cash as possible from people’s wallets.

There are signs that shoppers have wised up to the noise and nonsense and will respond in their own way. That’s not only good for everyone’s mental and fiscal health, it is a potential edge for small retailers taking a balanced, quiet approach. If that does happen this year, and a weak Black Friday gives way to a strong overall season, as I expect, it will be a sign that retail is indeed restructuring at the end of this Depression. We’ll see.