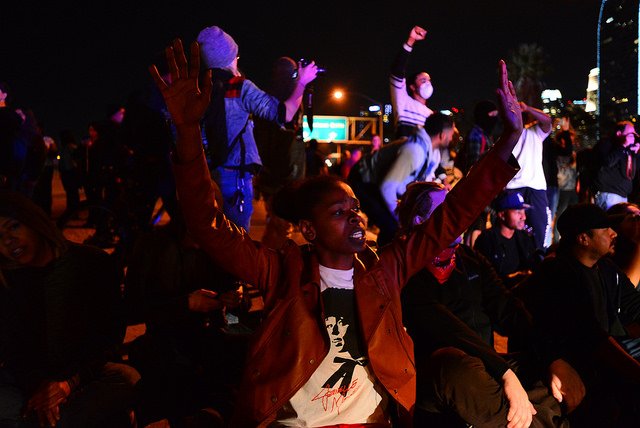 With the release of a grand jury’s decision not to indict Mike Brown’s killer, many of us are feeling a lot of anger and sadness about the racist systems in place in our country. It warms my heart to see all the Black Lives Matter hashtags and Ferguson protest invites popping up on my Facebook newsfeed.

Keep on posting and marching, but listen, there’s something we have to talk about:

There’s a lot of it given away in the United States every year. Take it from someone who regularly looks at foundation tax returns. There’s a whole lot of money in the U.S. But, the vast majority of it is controlled by white people who are well served by the status quo. And those white people mostly transfer their wealth to cultural institutions that serve other privileged people like them, namely their alma maters.

While there was a total of about $335 billion in private charitable giving in 2013, only a tiny percentage of that went towards social justice.

It’s important to go to rallies and marches, and sign petitions and share information, but it’s equally important to open our wallets at the same time. It costs money to organize those activism events. Permits, microphones, online petitions, social media promotion — it all costs money. Not to mention the cost of organizers. From my experience working in nonprofits, being able to pay organizers a living wage and maintain a stable work environment matters a lot to making real social change.

Building a social movement means building relationships for the long term, and you can’t build those relationships if organizers don’t make enough money to take care of their families. With the vast majority of philanthropy going towards colleges and hospitals and religious institutions, it’s tough to raise the money to support social change.

So this week, as you gear up for the holidays, direct some of that Black Friday cash towards the organizations that will turn our tide of anger and grief into real change.

Check out who is organizing the event you’re attending and the petition you’re signing. What media organization is hosting the articles you’re reposting and quoting? Those organizations need your dollars as well as your voice.