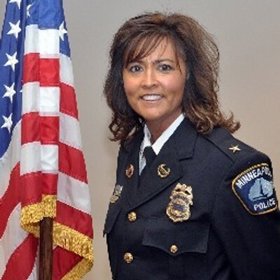 It appears that no one is safe in Minneapolis – not even the city’s chief of Police.

Minneapolis Police Chief Janeé Harteau was scheduled to be a part of a community listening session on Sept. 18 at Sabathani Community Center in south Minneapolis, but a couple of hours before the event was to take place, the chief pulled out citing “credible information” of a planned attack on her.

“The MPD (Minneapolis Police Department) received credible information from a long standing community leader, in addition to a number of other sources, about planned physical disruptions at a ‘community listening session’ that I was scheduled to attend,” said Harteau in a statement provided to media. “Based on these known threats, which were outright and open in social media forums, I decided it is in the best interest of community public safety to cancel my appearance. I am disappointed because I looked forward to hearing from the residents of Minneapolis.”

The listening session was put together for the community to address a myriad of concerns – in particular, how Black citizens are treated by members of the Minneapolis Police Department. Those associated with the event, which drew about 200 citizens ranging in age from the youth to the elderly, said the chief’s decision to not attend the meeting was an insult – in particular to the Black community.

“It was a slap in the face,” said Nekima Levy-Pounds, a professor of law at the University of St. Thomas Law School and the founding director of the Community Justice Project. Levy-Pounds moderated the event. “I was stunned that a police chief who has hundreds of officers and all types of weapons would say she was fearful of the community. It was actually insulting to say that members of the community would be a threat to her.”

Levy-Pounds said there was not threat to the chief and when pressed, the chief pointed to a person’s Facebook posting asking people to wear red shirts to the event. Levy-Pounds said she believed the red shirts were to symbolize the blood of victims of police brutality.

“This was a clear opportunity to show the community that the chief was serious about the concerns of police and community interaction, but instead she was missing in action,” said Levy-Pounds.

While Harteau was a no show, the forum went on as scheduled with city council members Alondra Cano, Cam Gordon and Elizabeth Glidden and Rep. Raymond Dehn all in attendance. Panelists who did show were Dr. Rose Brewer, Jennifer Singleton and Jason Sole. Along with Harteau, another no show was Minneapolis City Attorney Susan Segal. Segal gave no reason for her not showing up.

In a later statement, Harteau said she still wants to dialogue with the community … but on her turf.

“I made a very difficult but necessary decision to cancel an appearance at a ‘community listening session.’ I want to be clear that I am more than interested in having this conversation, and many others, provided they are conducted in safe and productive environments,” said Harteau. “Community engagement is paramount to the Minneapolis Police Department. It is the reason the Chief’s Advisory Council meets regularly, to talk about that very link between our officers and the communities we serve.”

Harteau said she has called for a special meeting of the advisory council to make up for her not appearing at the south Minneapolis event.

Levy-Pounds said the community deserves an apology from the chief.

“We want a public apology from Chief Harteau for not attending the scheduled community forum and for mischaracterizing the community with her racially coded language,” said Levy-Pounds, who said the chief several times referred to north Minneapolis sources as the reason for the so called threat. Levy-Pounds noted that north Minneapolis is often used at a synonym for African-Americans and she further pointed to the fact that the meeting took place in south Minneapolis, saying again there was no need to reference north Minneapolis in her decision to pull out of the discussion.

“Her use of the term north Minneapolis was racial and it was deliberate,” said Levy-Pounds.

Insight News requested an interview with Harteau but through a spokesperson, she declined.