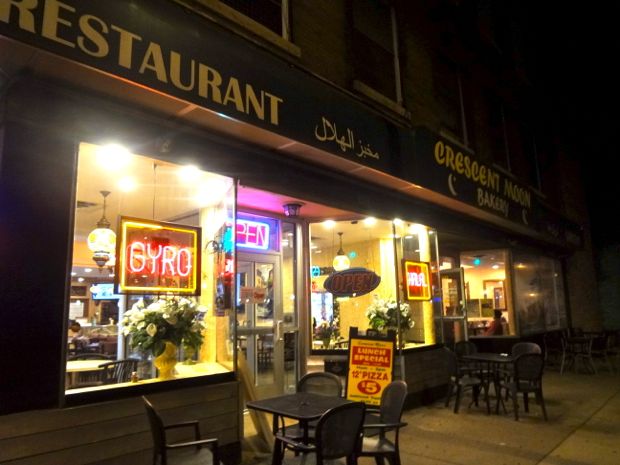 I stopped by the other night to check out the Iftar buffet at Crescent Moon, the Afghan restaurant on Central Ave. in northeast Minneapolis. Iftar is the traditional meal that ends the daily fast during Ramadan, the Muslim month of dawn-to-sunset fasting, and Crescent moon is one of several local restaurants that offer Iftar buffets.

The Crescent Moon’s nightly Iftar dinner is held in the restaurant’s third-floor banquet room, an opulently appointed room with brocaded curtains, white linens and even a mirrored disco ball. (The dinnerware for the buffet is less opulent: styrofoam plates and cups, and plastic cutlery.) 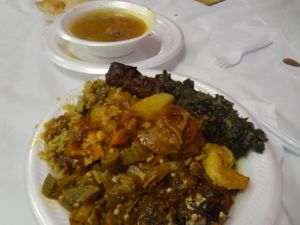 Ramadan follows the lunar calendar, so its dates according to the Gregorian calendar change every year. Since Ramadan this year falls in mid-summer, it’s a long fast—at Crescent Moon, the buffet service didn’t start till after 9 p.m.

The large hall was nearly full when I visited, with a festive crowd that looked to an outsider like a cross-section of the local Muslim community—at one table, a group of men who might have been Somali or Sudanese, speaking a language I couldn’t identify, at another a group of young women wearing hijab, speaking un-accented English, and at other tables, men and women who could have been from Pakistan or India.

The spread offers a big variety of traditional Middle Eastern and Afghan fare: everything from hummus, baked eggplant and rice pilaf to lamb shank, chicken and kebabs of ground beef and lamb. This is the kind of fare that holds up pretty well in a chafing dish: not delicate, but hearty and tasty, and a pretty good deal at $12.99. The dessert table offered baklava, rice pudding, dates and fresh fruit, including cherries, grapes, watermelon and bananas.

My friend Ahmed Tharwat, producer of the BelAhdan show on TPT, visited a couple of other local restaurants that offer Iftar buffets, including the Marina Grill and Deli at 2424 University Ave. N.E. , and Marhaba Mediterranean Grill (formerly the Java) at 2801 Nicollet Ave. S. in this recent installment of his show: 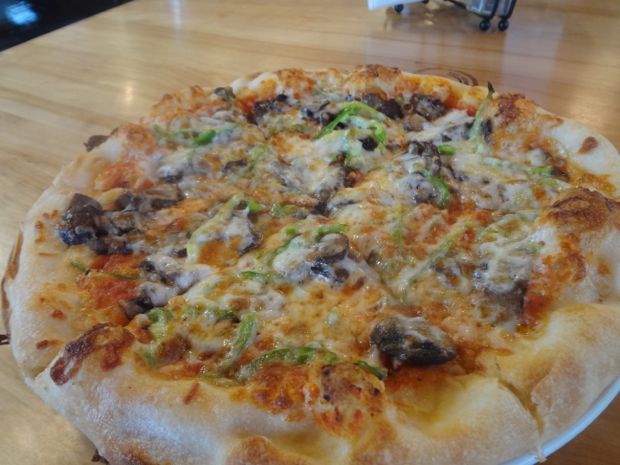 Finally made it over to Sun Street Breads at 46th and Nicollet for their Monday night pizza night, and had a delightful veggie pizza, topped with tomato sauce, mushrooms, peppers and mozzarella, with a crisp, puffy crust ($9). Other options included mozzarella ($7), pepperoni ($8), Hawaiian (house-made spam, pineapple and mozzarella ($10) and the house special: Italian sausage, hot and sweet peppers, chipotle tomato sauce and mozzarella ($10).  Pizza night only lasts a couple of hours—from 6 to 8 p.m.—but they cranked out a lot of pizzas (like 100) in that short time.

Vo’s Vietnamese is coming to the former El Meson site at 35th and Lyndale. I walked by the empty storefront the other day and saw a man inside fixing up the interior. Turns out it’s Francois Vo, former owner of Vo’s Vietnamese restaurant, a longtime fixture in Northeast that closed around a decade ago. Vo returned recently from living in San Diego, and he plans to reopen his namesake restaurant sometime next month. Stay tuned for details.

Speaking of the former El Meson, I caught up recently with its former chef-owner, Hector Ruiz at Cafe Ena. His newest restaurant, the Rincon 38 tapas bar just opened a few months ago, but the French-trained chef is already at work on another restaurant, La Fresca, to open later this year at 48th and Bryant. The menu will feature burgers and sandwiches at lunch, targeted at the Washburn High crowd, and home-style French cooking at night. 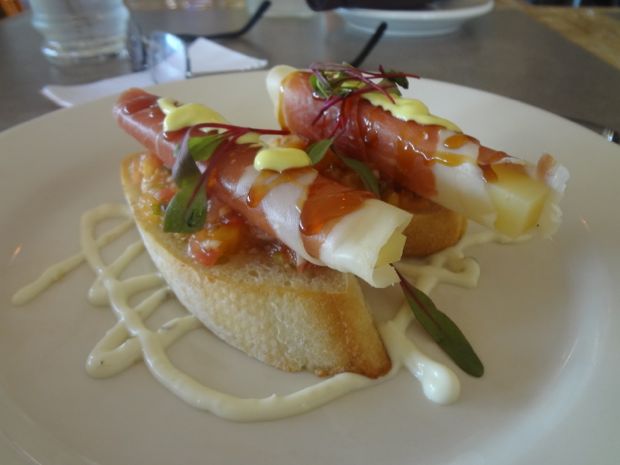 Ruiz mentioned that Rincon 38 now offers a happy hour from 3-5 Sunday through Thursday, featuring $3.50 tap beers, $4 wines by the glass, and a selection from their tapas menu for $5 a plate, including queso frito (fried cheese), calamari, patatas bravas (potatoes with asparagus, Spanish chorizo sausage and artichokes) and gambas al ajillo (langostinos in a garlic pimenton wine sauce). Some of the portions may be smaller than they are on the dinner menu, but the pan tumaca—toasted bread topped with a tomato puree and slices of jamon de Serrano wrapped around a Spanish cheese—looked quite generous to me.