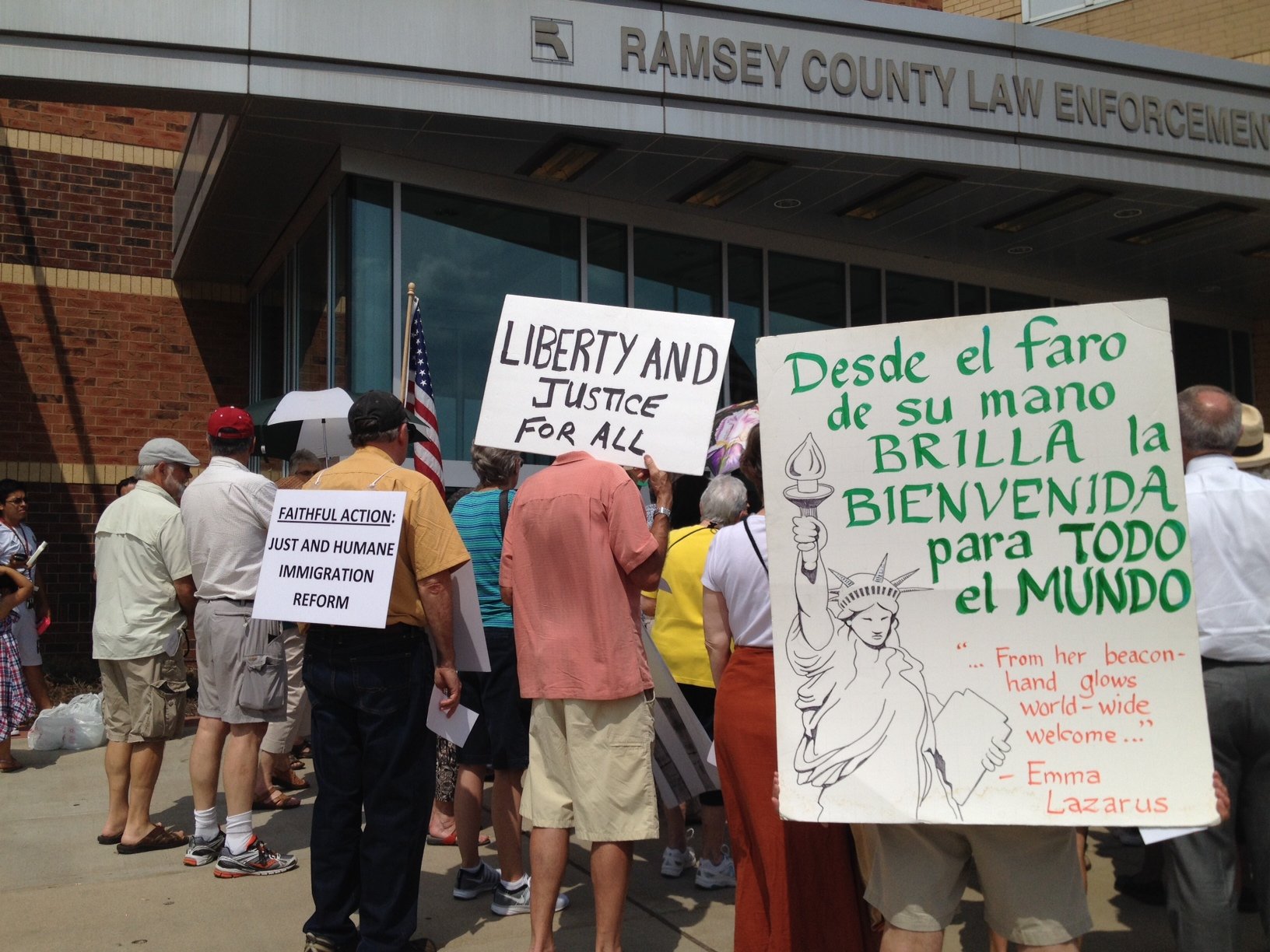 “We, as Americans, are better than this,” Imam Asad Zaman told the crowd standing under the blazing August sun. “We cannot kick people away from the doorstep.”

FULL DISCLOSURE: I participated in the vigil, so this is an article by an advocate, not a reporter.

Along with Jewish and Christian religious leaders, the imam spoke to about 100 people gathered for a monthly vigil for immigrants, this Sunday afternoon focused on the tens of thousands of Central American children seeking refuge in the United States.

August 3 was the 59th monthly vigil at the Ramsey County Detention Center, according to organizer Kathryn Sharpe, who introduced Archbishop John Nienstedt, Rabbi Alan Shavit-Lonstein, Sister Susan Hames of the Sisters of St. Joseph of Carondelet, and Imam Asad Zaman.

Zaman said that immigration is not a problem of budgets, but a moral problem — albeit a problem that has offers potential profit to the country. Nikola Tesla, he said, came to the United States as a penniless immigrant, and then became the father of the modern electrical system. “If morality does not convince you,” Zaman said, “let the dollars convince you.

Rosa Tock, a Guatemalan immigrant, described the devastation of Central America by the wars of the 1980s, and U.S. responsibility for its part in those wars, in CAFTA and in the war on drugs, all of which play a part in the current violence in the region.

Ana Vasquez of MIRAC, one of the organizations participating in the monthly vigil sponsored by the Interfaith Coalition on Immigration (ICOM), told vigil participants that the child refugees are a direct result of U.S. policies in Central America. As a Salvadoran immigrant, she reminded participants of assassinated Salvadoran Archbishop Oscar Romero, saying “We need to carry on his legacy and speak for those who cannot speak for themselves.”

Speakers urged participants to call the president and congressional representatives to demand fair treatment for the Central American children and consideration of their claims for asylum, as well as continuing calls for comprehensive immigration reform.

About a hundred people, by my count, attended the vigil.

Comprehensive immigration reform is one of the focuses of the vigils.

Banners at the vigil.