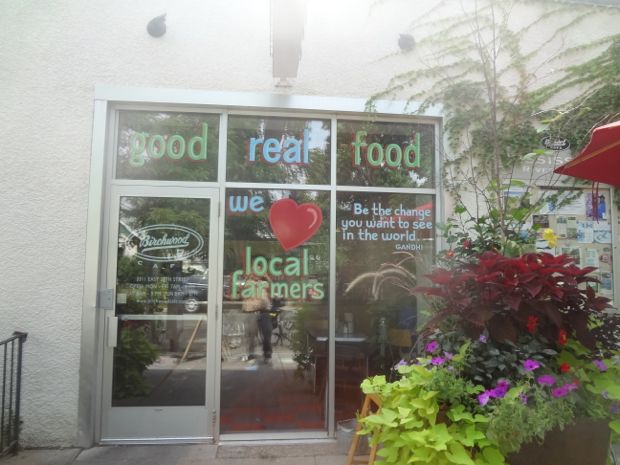 The Birchwood Cafe, a popular Seward neighborhood natural-local-sustainable eatery, is celebrating its 18th birthday this Sunday from 5 to 9 p.m. with a combined birthday party and Kickstarter Kickoff – they are trying to raise money to expand the cafe “with more seating, enhanced guest service, greater kitchen capacity, an additional bathroom, a community room, and the ability to increase catering.” Five local breweries are among the sponsors, so there should be a good selection of brews on hand. Check their website for details.

Kickstarter seems to be a popular way to raise money for restaurant projects — Travail recently did a Kickstarter fundraiser with a goal of raising $75,000 – and raised a total of $255,669. Premiums for Travail’s fundraiser ranged from getting your name on the restaurant’s family wall for a $10 pledge, to getting your own private party for up to 40 people plus some other goodies for a $10,000 pledge. (That one got three takers.)

The Star Tribune’s Lee Svitak Dean reports that Heidi’s restaurant has closed, and that Steward and Heidi Woodman are divorcing. The restaurant was previously scheduled to close at the end of the year.

A press release announces the imminent opening of Kyatchi Sushi at 3758 Nicollet, a Japanese restaurant offering sustainable sushi, plus some “new items not usually found on Americanized menus (including) grilled meat & vegetable skewers, traditional donburi rice & vegetable bowls, an assortment of small plates, and a Japanese spin on hot dogs.” There’s no explanation offered of what the Japanese twist on the hot dog could be, but a quick Google search revealed that Japanese-style hot dogs are hot on the West Coast, with local food cart chains operating in Vancouver and Seattle. According to Jessica Partnow, writing in the Seattle Globalist, the most popular Japanese hot dog in Seattle is the Matsure – “a sausage topped with nori (seaweed), carrots and onion, drizzled with Japanese mayo.”

Did you know that Grand Szechuan in Bloomington — for my money, one of the best and most authentic Chinese restaurants in the Twin Cities — has a weekend brunch menu? No, it’s not dim sum, but the weekend offerings include a few similar items, including Chengdu Spicy Wontons, Shanghai style steamed pork dumplings, and Szechuan spicy pancakes. Signs on the wall advertise some other dishes that you won’t find elsewhere locally, including bean jelly, and chili rice cakes ($10). This was an opportunity to explore some dishes I had never seen before, such as the  fish fillets and bean jelly in Szechuan sauce  (not on the menu, but advertised by a hand-written sign on the wall, $19);  fish and lamb dumplings in a clay pot ($14) and a savory stew of fried tofu, fresh vegetables and thick hand-made noodles in a mild but savory broth.

tofu and handmade noodles in broth