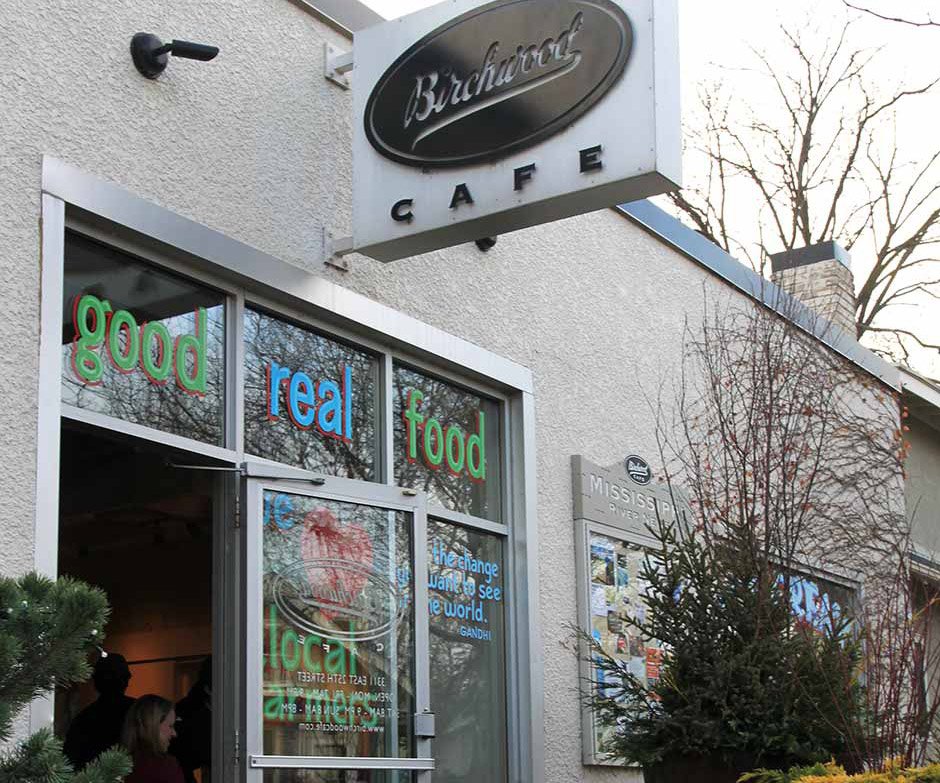 When the Birchwood Cafe’s doors first opened eighteen years ago, owner Tracy Singleton was planning on just being open during the week for morning commuters needing a coffee and pastry and for neighborhood folks needing a quick lunch. What she didn’t expect was instant demand for a full menu and extended hours.

She recalled, “We had our big grand opening on a Tuesday night. When we opened the next day people came in a bought coffee and baked goods, which is what we had, and then they were like, ‘You’re going to have more food, right?’ And we were like, ‘Yeah, of course!’ And then three o’clock shut down came, and people kept coming. They were like, ‘You don’t have your dinner menu ready? Oh, OK. When are you going to start your dinner menu?’…. That first day we changed our opening hours from 3 to 7 p.m., and then next day we changed it to 8 p.m. Then it was 8 p.m. for awhile and then we changed it to 9 p.m. …. We were very flexible. This is what people wanted. We planted a seed and everyone else came and was like ‘Yeah, we want more food, we want dinner, we want weekends,’ and we said ‘OK. We’ll give it to you.’”

Serving a Full Menu from a Coffee Shop Kitchen

If you’ve been to the Birchwood lately, you know that every inch of space that can be used, is being used. And because of the cramped quarters, Singleton has decided it’s time to expand. Its renovation plans include a larger kitchen, more seating, an additional bathroom, a solar roof, and more energy efficient appliances. The project is estimated to cost $1 million. The majority of funding will come from banks and private investors. Singleton hopes that $100,000 will come from her community of supporters, through a Kickstarter campaign.

It’s this strong community and sense of place within the Seward community that is motivating Singleton to expand at the current location, rather than just move to a larger space in Uptown or the western suburbs, a suggestion she has received from banks. She commented, “From a bank’s perspective, that money would have a greater impact or a better return with a less risky-seeming investment in a different location.”

However, moving has never been an option for Singleton. When she was first vying for the space 18 years ago, she was up against 30 other potential business owners with ideas for the space. The owners Cy and Del Bursch, weren’t looking for the most money for the property, but were looking for a buyer that would give back to the community, Singleton explained. In the 1920s, Del Bursch’s parents opened a dairy in the building. They were surrounded by farmland, and local farmers would bring milk to the dairy for bottling and churning into butter. These products would be delivered to neighborhood customers, along with fresh eggs, in Bursch milk trucks. “Talk about knowing where your food comes from,” commented Singleton.

Carrying on the Bursch’s Mission

Not only was Singleton chosen as a buyer, the Bursch’s also let her use their name – and the Birchwood Cafe was born. “Honoring that [carrying on the Bursch mission] and the fact that they let me keep using their name, I mean that has so much weight to me that I couldn’t just pick it up and move it to a mall somewhere. It just doesn’t make sense to me.”

“I feel like we have a very trusted and established brand,” Singleton said. “Part of that brand is people coming to this neighborhood and having an experience at the Birchwood. And again, it’s that sense of place. That’s a piece of why we’ve been able to do what we do for as long as we have, and I would never want to take that for granted.”

The Birchwood Cafe is asking its fans to support its expansion by becoming a Birchwood Backer in it’s Kickstarter campaign – which Singleton believes just one more way for people to become involved in the Birchwood and its mission to source local, sustainable food and fair, living wages for farmers and cafe employees.

Singleton’s goal is to complete the remodel this winter, so that it is ready to open this spring – not just for it’s busy patio season in June and July, but also so that it can continue to support their farmers. These are the months that the farmers rely on Birchwood the most to buy their produce, noted Singleton. For most, the Cafe is their biggest customer.

The Birchwood Cafe’s Kickstarter has less than two weeks to go. Find out more about the project and support its crowd-funding endeavor.