They’re also being hailed for their extremism by the Washington Examiner’s national reporter Betsy Woodruff in Six House candidates who want to be the next Justin Amash.

Readers may remember that the National Journal reported in January that the Michigan Republican Congressman helped Conservatives Form Their Own Caucus Because the [Republican Study Committee] Isn’t ‘Hard-Core’ Enough.

These are the folks in the Beltway who worry about not being extreme enough.

Not so fast, the Birchers at The New American say in GOP Congressional Hopefuls Look to Join Amash’s Liberty Caucus. Joe A. Wolverton, II, J.D., a correspondent for The New American, raises some yellow flags on both Emmer and Mills:

Although there are likely scores of simpatico candidates running for state and local office across the country, Woodruff highlights six congressional candidates in her article, each of whom she believes has a shot at joining the roster of libertarian-leaning legislators and making things hard on the “moss covered” GOP establishment.

First up is Tom Emmer. He won the GOP primary held earlier in the week in Minnesota, and is vying to fill the seat once held by Michele Bachman.

David FitzSimmons, an Emmer campaign consultant, told the Washington Examiner that Emmer was “very much a states’ rights guy” and that he would have no qualms about straying from the party line when necessary.

“He’s his own person, so his views may align with some people sometimes and with others different times,” FitzSimmons said, as reported in Woodruff’s article.

That’s not exactly the brand of bold language many constitutionalists would prefer, but it is the sort that gets one elected, and if Emmer will join the Amash bloc of constitutionalists, then a little soft pedaling can be forgiven. 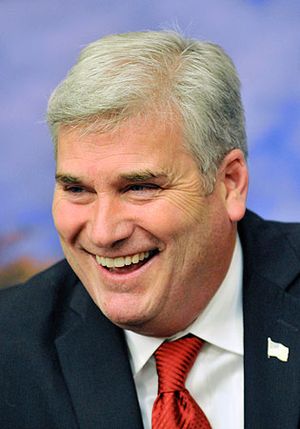 Gone is the Tom Emmer of yesteryear, whoe generated headlines like Emmer’s feisty spirit fuels legal fights, and the principled ideologues who egged him on. They’re willing to live with Minnesota Nice if it floats Tom’s boat all the way to the banks of the Potomac.

After assessing an interloper from Arizona, Middleton moves on to Mills III:

The third person on Woodruff’s list of potential Amash allies is Stewart Mills of Minnesota.

Ramsey is quoted as saying of Mills, “Probably every issue, he’d be with Amash.”

Under the “issues” tab on his campaign website, Mills writes the following under the subhead “Protecting Our Constitutional Rights:”

As a hunter and a competitive shooter, Stewart is staunch supporter of the Second Amendment, but he also believes that the entire Constitution must be protected and upheld in Washington.

One wonders why the reference to hunting and competitive shooting is necessary or even commendable in a comment on the sanctity of the Second Amendment, but protecting and upholding the entire Constitution would be a welcome change in D.C.

Apparently a hunter’s street cred might play in Minnesota politics, but the Birchers have their doubts.

Emmer is considered the frontrunner in the race to fill the open seat created by the retirement of Congresswoman Michele Bachmann. Mills is in a heated battle to unseat Congressman Rick Nolan.

Update: Amash was in Minnesota in June, fundraising for his own primary. The event was sponsored by the Liberty Minnesota, the MN Tea Party Alliance and The Canary Party. The latter is a “health choice” group largely associated with the anti-vaccine movement.