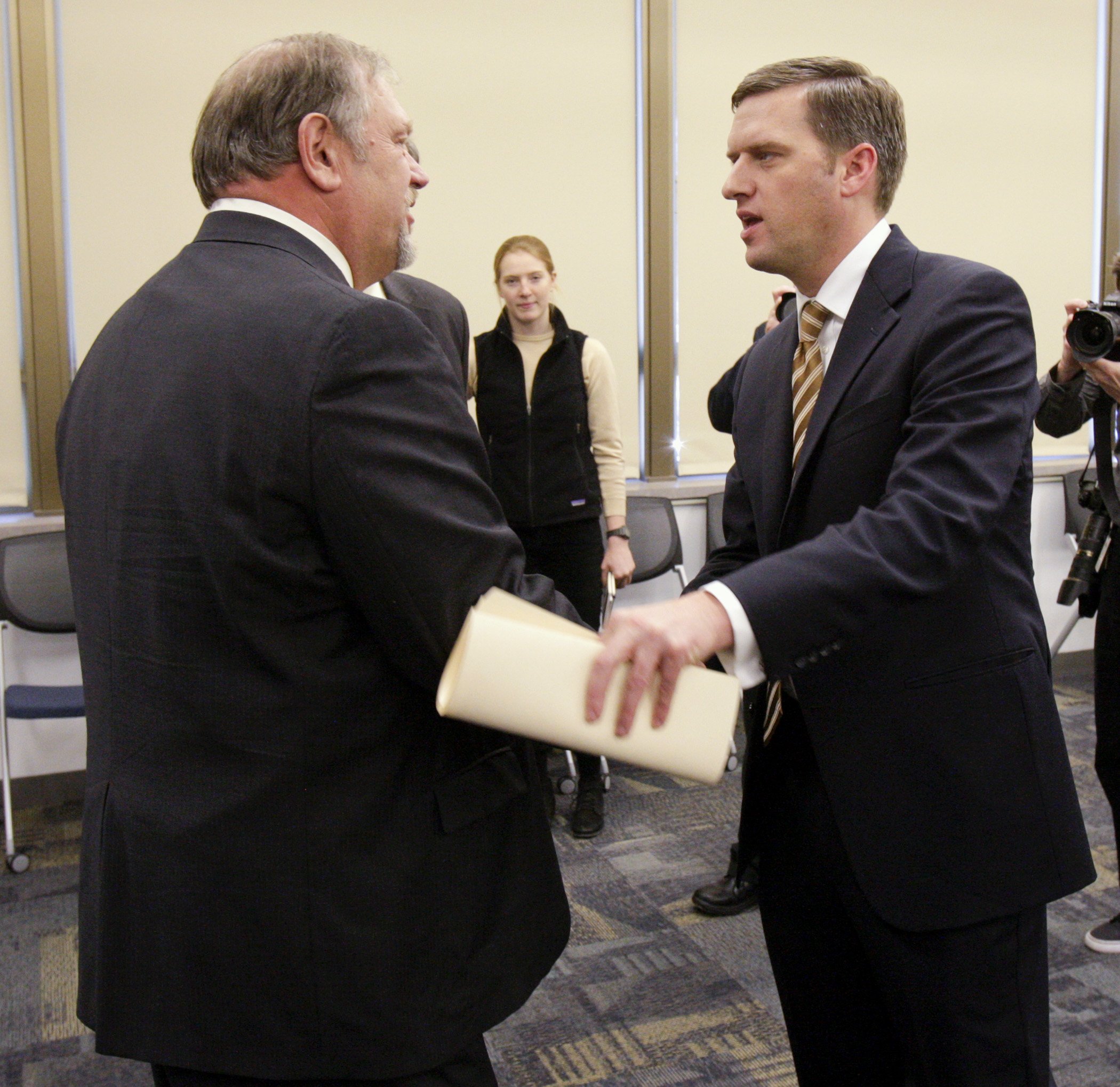 (Photo by Paul Battaglia) Senate Majority Leader Tom Bakk, left, and House Speaker-designate Kurt Daudt greet after they both made comments regarding the Dec. 4 release of the November Budget and Economic Forecast.

Legislators and Gov. Mark Dayton are expected to have more than a billion additional dollars at their disposal.

Released Thursday, the November Budget and Economic Forecast shows the state with a projected $1.037 billion available for the upcoming biennial state budget.

“The long-term fiscal stability of the state is in good shape,” said Jim Schowalter, commissioner of Minnesota Management & Budget. “This forecast continues to show a balance between our budget and expenditures, both in the current biennium and going into the future.”

The twice-annual forecast from MMB provides a snapshot of the state’s economy and predicts if the state should have a projected surplus or budget deficit.

The projection, an increase from $603 million at the end of the 2014 legislative session, is drawn from economic growth estimates combined with tax and spending patterns. According to MMB, forecast revenues have increased by $279 million — including $194 million more than anticipated in income tax receipts — while projected spending is $249 million lower, largely due to decreased health and human services costs.

Current House Speaker Paul Thissen (DFL-Mpls) said the forecast validates his party’s claim that tax increases on the wealthiest Minnesotans would not lead to a faltering state economy.

“We’re seeing the benefits of governing well and actually putting together a sound budget,” he said.

Added Senate Majority Leader Tom Bakk (DFL-Cook): “We’d be sitting here with a deficit today if we hadn’t raised some revenue in 2013.” 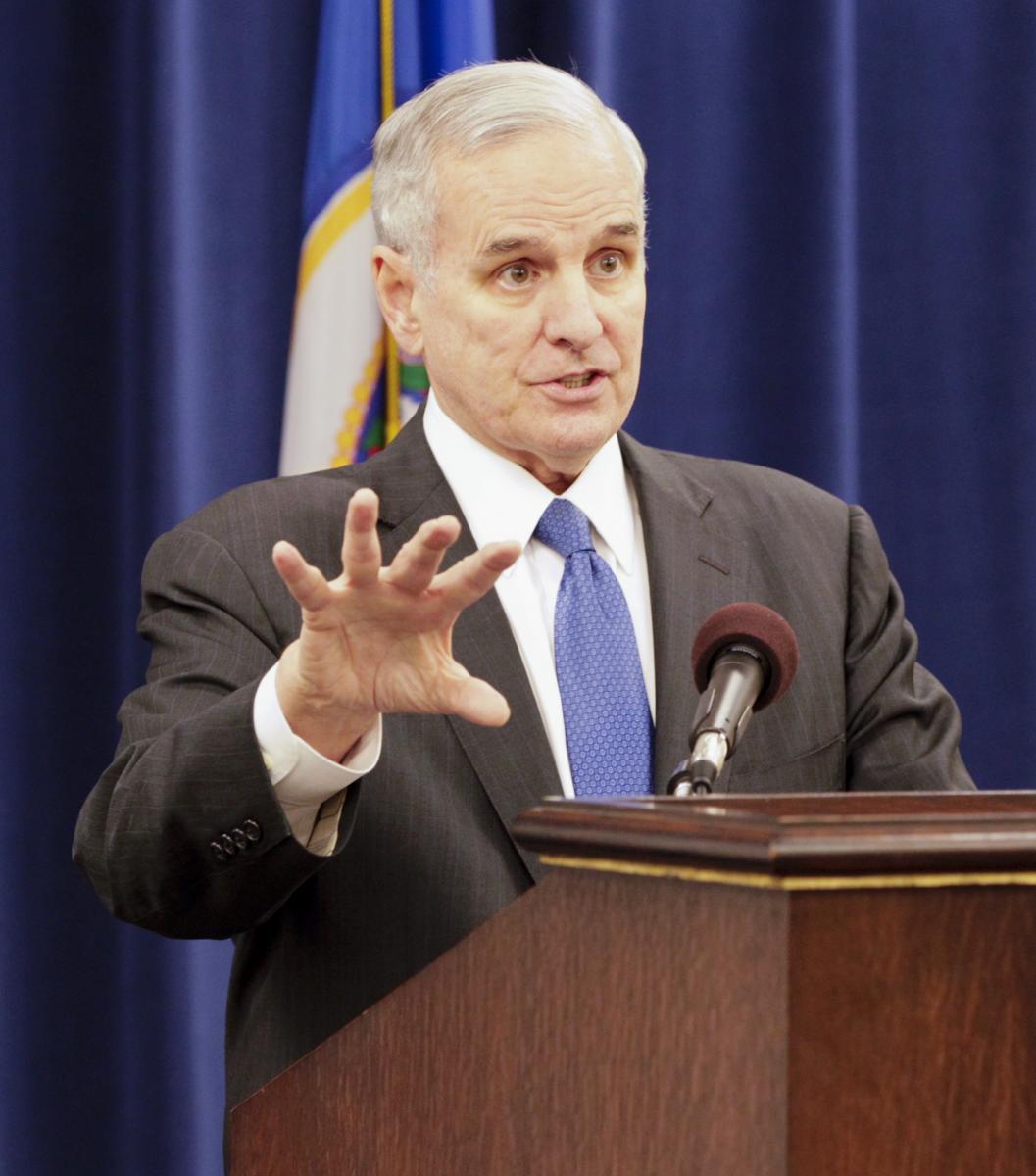 Left: Gov. Mark Dayton reacts after the Dec. 4 release of the November Budget and Economic Forecast. The forecast predicts a $1.037 billion surplus for the next biennium.

The projected balance at the end of the current biennium on June 30, 2015, has increased to $556 million, of which $183 million is statutorily directed to the state’s budget reserve, which now stands at about $994 million with another $350 million available in the cash flow reserve. That leaves a $373 million budgetary balance for 2014-15. MMB officials said that balance is added to the resources for the next biennium.

MMB indicated state revenues in the 2016-17 biennium are expected to increase by 6.4 percent to $41.88 billion, while state spending is scheduled to be $41.24 billion, a 4.8 percent increase over current levels. Both are lower than previous projections.

Those downgraded revenue projections are reason for concern, said House Speaker-designate Kurt Daudt (R-Crown), who will lead the Republican-controlled House when it convenes next month. To paint a rosy fiscal picture, he said, “That’s not looking at the numbers.”

Daudt said the state’s economic growth isn’t being felt in family budgets, adding that more emphasis needs to be placed on helping their bottom lines.

The November forecast will serve as a basis for Dayton and the Legislature as they begin to consider a two-year budget during the upcoming legislative session. However, the forecast to be released in late-February — including updated data such as holiday retail sales — will be more crucial when determining the final budgetary numbers for the 2016-17 biennium. That two-year cycle begins July 1, 2015.

An anticipated surplus should make budget creation with a divided Legislature a bit easier, the governor said. In Dayton’s first two biennia as governor, the state faced projected deficits.

“It should make it more possible that we will come out of session on time and without a showdown like we had in 2011,” Dayton said.

Dayton said he plans to meet his Jan. 27 deadline to present his budget to the Legislature. He said his priorities will include a child care tax credit, rural broadband expansion, transportation system upgrades and early childhood education scholarships.

The governor indicated he doesn’t plan to introduce a general tax increase in the upcoming session; however, a user fee for funding transportations needs could be in the offering.

Daudt says such increases would be “incredibly unpopular,” and would take money out of the state’s economy and the pockets of Minnesotans.

Bakk urged restraint from those wanting to spend some of the surplus, saying they “should maybe temper their expectations a little bit.”