Mustafe Abi helps a customer with a money transfer Saturday at KAAH Express in the Cedar-Riverside neighborhood. (Photo by Simon Guerra)

For Aden Hassan, sending $100 a month to his uncle and cousins in Somalia felt like the least he could do. In January, as they were facing a drought-induced famine, most banks were closing accounts with Money Service Businesses, leaving him no way to help them.

Hassan said he felt guilty eating when he knew his family could be left without food or shelter without his support.

But now that a congressional subcommittee is developing a bill that will lower the financial and legal risks and costs banks encounter when holding accounts with MSBs, Hassan may soon find it easier to send money to his relatives.

“Right now the burden is on the banks to comply when really the burden should be on the wiring services,” said Rep. Keith Ellison, D-Minn.

Ellison said the bill would give banks more incentive to do business with MSBs.

Along with commercial banks, MSBs are audited frequently by government agencies, Ellison said. The Bank Secrecy Act puts more pressure on banks to be responsible for keeping records of transactions, when the responsibility should weigh on MSBs, Ellison said.

The implications of the bill are a welcome relief to Hassan. He said, however, it’s important for people to understand what many other families like his are going through.

“If they don’t receive small assistance, that is it,” Hassan said. “It stops an entire lifeline.”

According to the Bank Secrecy Act, if a bank doesn’t have all necessary information for auditors to understand where money is coming from and going, the banks can get penalized.

“We have a responsibility to the nation and our regulators to make sure that money gets transferred to the right hands,” said Nicole Garrison-Sprenger, a U.S. Bank spokeswoman.

Both banks and MSBs have a responsibility to be audited by government agencies, said Hassan, a manager at Cedar-Riverside’s Kaah Express — one of more than 300 MSBs in Minnesota. However, Hassan said banks are more pressured to retrieve records of transactions.

“What we want to do in order to entice [banks] back in the market is to reduce that burden,” Ellison said.

While the bill will lower bank pressure, Ellison said it would also address the importance of monitoring and recording transactions.

“The reason these things are in place is to protect public safety and terrorist financing,” he said.

Hassan said he understands that banks have an obligation to abide by the law. However, as a manager for an MSB, he still worries his business will fail because there’s only one bank that facilitates their transfers.

“If tomorrow they decide they want out, then we are out of business,” Hassan said.

Since 1988, when its civil war broke out, Somalia has had an informal banking system and an unstable government, which provides very minimal work opportunities for Somalis, according to the Associated Press.

Abdullahi Adan, a University of Minnesota graduate who sends money to his family in Somalia, said it’s necessary for Somalia to receive remittances in order for its economy to survive.

“The entire country relies on it,” Adan said.

“If you take this money out, there is no way that this community could supplement the money in remittances in the form of foreign aid,” Ellison said.

Somalia got about $9.3 million in foreign aid in 2011, according to Global Humanitarian Assistance.

“In reality the money transfer industry in Somalia is the only financial sector that really exists there,” said Adan.

Mustafe Abi, a Somali refugee who escaped to Kenya as a child, said though he lived in Kenya for most of his life, he doesn’t consider it his home. 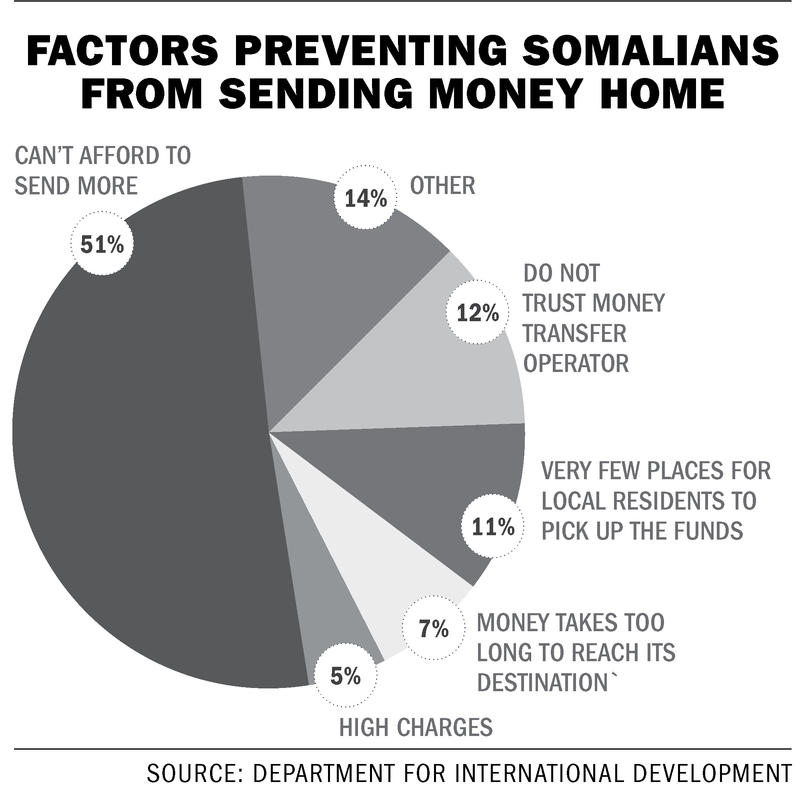 While the term hawala means “transfer” in Arabic, over the years, the term has acquired a negative connotation, Hassan said.

In the past, without modern technology to make secure transfers, the transfer services relied on trust.

Adan said the term can be tricky depending upon the way it is used.

“There are a lot of negative things connected to that word. But if you use the word money transfer, it is more legitimate in a way,” Adan said.

Hassan explained that in the “old days,” people would go to a person to have money transferred. The location doing the transferring would not document the specifics of where the money was being transferred or how the money was retrieved.

Now that MSBs have the technology to record each transaction, Hassan said, hawalas have evolved into a transfer service that is regulated by the government.

“Our whole business is being misrepresented if we ignore documentation, as if money transfer hasn’t moved on,” Hassan said.

Adan acknowledged that the way some use hawalas may not be completely legitimate.

“Hawalas exist throughout the world,” Adan said, “not just Somalia.”