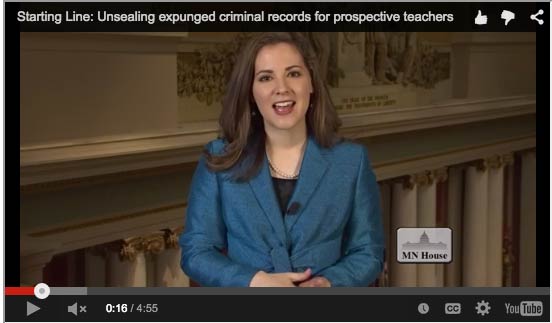 According to the U.S. Department of Labor, the number of Americans who have had contact with the criminal justice system has increased dramatically in recent decades.

The agency estimates that about one in three adults has a criminal record. However, the records often consist of a non-violent crime, an arrest that did not lead to conviction or the convicted person was not sentenced to a term of incarceration.

Judges can seal, or expunge, criminal records, including arrests, prosecutions and convictions for people who have demonstrated changed behavior after completing punishment.

Expungement is especially helpful for job seekers whose offenses may show up on criminal background checks.

Criminal records that remain sealed for those applying for teaching positions concerns Rep. Sondra Erickson (R-Princeton). She thinks it would put children at risk.

She sponsors HF1401 that would require school districts to unseal expunged criminal records for prospective teachers.