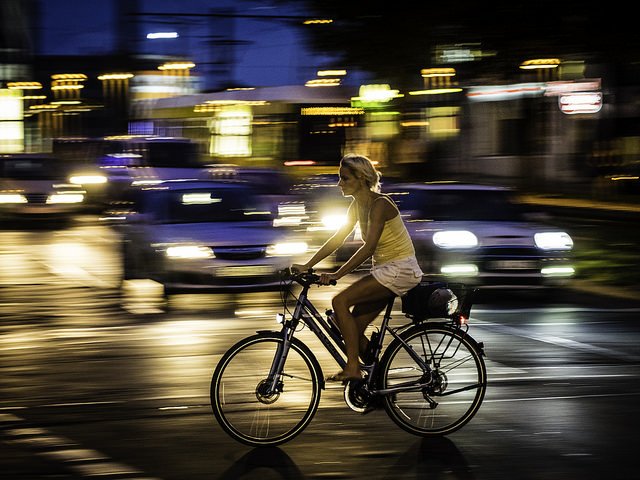 Do bikers make better drivers? Or at least less stressed out drivers?

In a recent column in Out There Monthly, Hank Greer relays his experience of becoming a better driver after he began cycling to work. Before cycling, his commute was a race against other drivers, changing lanes often and getting irritated by every other driver’s behavior. Now that he cycles frequently, he said he’s much more patient as a driver and doesn’t feel the need to compete.

In my car, I’m happy to let others merge and assume an almost meditative state during traffic jams.

“You are not stuck IN traffic, you ARE traffic,” I repeat to myself like a mantra. “I am part of the problem: this is what I get for being in a car at a poorly chosen time. Ommmm.”

After all, even if I’m part of a traffic jam for an hour or two, I’m still in a climate controlled environment with an entertainment system, protected by a two ton metal cage. I’m going to be ok.

On a bike, on the other hand, I will claim my place. Loudly. With hand gestures. I wait patiently at a massive intersection twice every day for the bike crossing light to come on, sometimes for as long as five minutes. Sometimes it’s in negative temperatures or in thunderstorms and always while inhaling large quantities of car fumes into my asthmatic lungs.

So lord help you if you pull into the crosswalk when it is my turn to go. I am only too happy to educate you on my right to share the road. I’ve been tempted to carry informational post-it notes with me with the words “this is a crosswalk” and “no turn on red” pre-printed.

Yes, I’m now a more patient, observant, cautious driver. But I’m also a much more confrontational biker. As a driver, I understand how irritating it can be for cyclists to whiz past your car and ignore traffic laws, but as a cyclist, I know it’s not just a matter of annoyance when cars drive dangerously — it’s a personal matter of life and death for me. That’s why I so often speak up and let drivers know when they’re putting me in danger in their constant rush.

As Minneapolis continues to build more biking infrastructure and more people begin biking, it’s important for cyclists to keep claiming their lawful place, but it’s even more important for drivers to slow down, stay out of crosswalks, and be actively looking for cyclists and pedestrians.

“Take a deep breath: you are not IN traffic, you ARE traffic.”