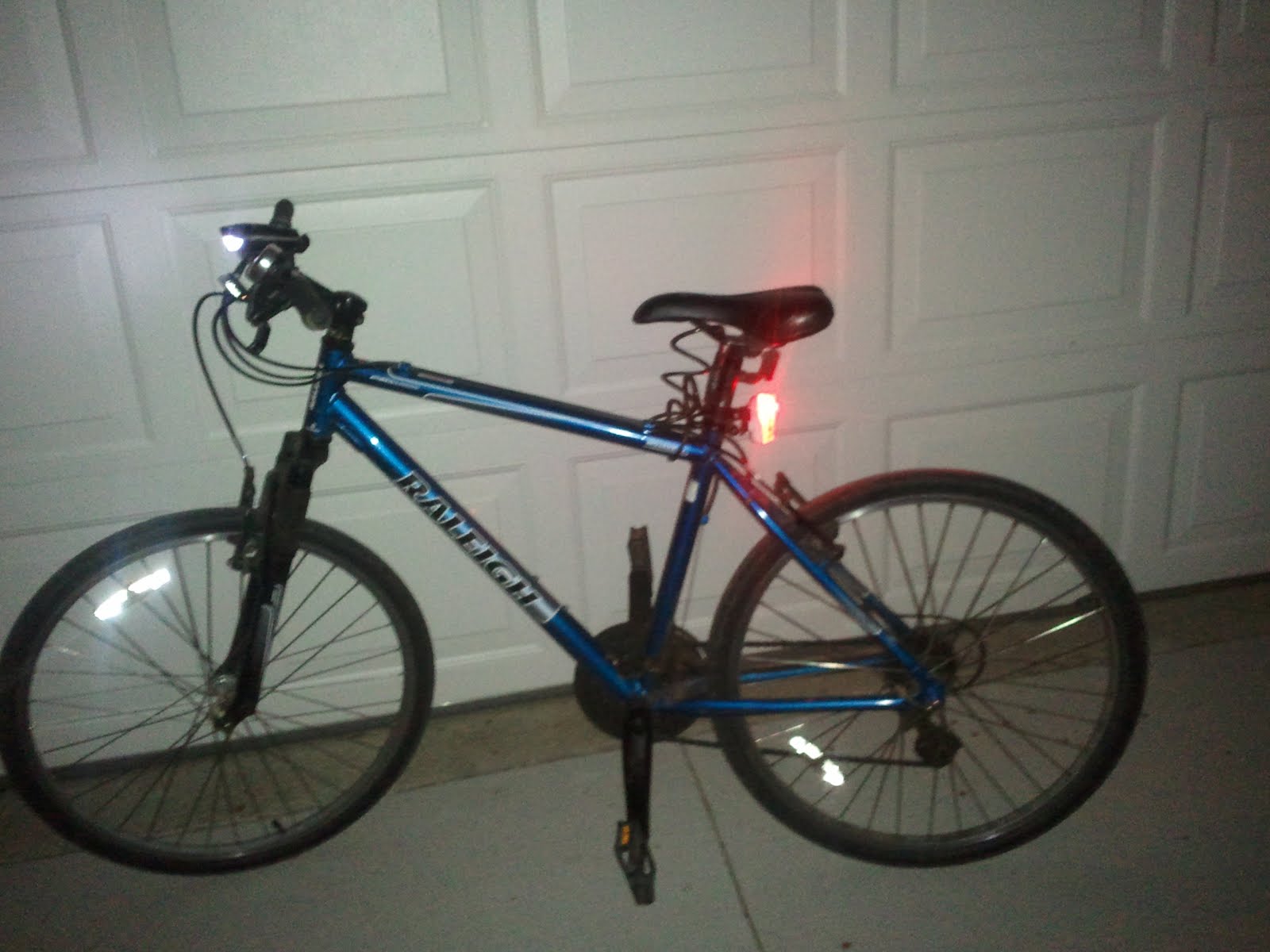 Six months ago, I took a challenge. I participated in Thirty Days of Biking, in which people commit to getting on a bike at least once every day in the month of April. I decided to take that a little further, and tried bicycling everywhere for that month. I even cycled out to Roseville a few times to sign mortgage documents. In the midst of closing on my house, my car needed repairs. I elected to put those off as long as possible, and wound up using two wheels as my primary mode of transportation over the summer.

I used a smartphone app to track every single biking activity I did during this stretch, which also doubled as a self-diagnosis for obsessive-compulsive disorder. Over the course of six and a half months, I did more than seven hundred three bicycle trips. My median trip length was just 1.27 miles, proving that a car is largely unnecessary for me. I cycled almost 1,500 miles since April. My app also tracked elevation, and told me I ascended over 59,600 feet. That’s the height of Mount Everest, K2, and Minnesota’s high point, Eagle Mountain, combined.

That transition isn’t as daunting as one might think (I did save roughly $350 in fuel costs), but there are some things I wish someone would have told me about first. For instance…

You’ll be sweating. A LOT.

This summer’s heat wave didn’t help much in this regard. In fact, one ten-mile round trip on the hottest day of the summer led to my bike tires melting almost straight through and I had to get new ones the next day. Mostly though, I was the one suffering from the heat. And people who had to sit next to me or shake my hand at meetings I had biked to.

I tried a few things, like bringing a change of clothes and arriving early enough to slip into a bathroom to put on my non-sweaty apparel before meetings where I needed to look presentable. The problem with that approach was that the clothes in my backpack were wrinkled from the trip. And if it was hot enough or the route long enough, my body wasn’t done sweating until well after I changed. Now I was sweaty AND wearing wrinkly clothes.

The dilemma was compounded when going on dates. Should I take a bus or a cab? Or take the chance that she’ll see the bike factor as a smart move and good for the environment and my health? There’s a line you cross when biking, and it usually comes around the 3.5-mile mark. Anything before that and your clothes and hair are tousled to the point where it could seem almost romantic. Beyond that, you just look crazy to your date. Which in my case is true, but arriving after a longish bike ride just helped them figure that out much faster.

I found the best way for bikers to counter the sweat factor was to arrive at the destination early enough for the sweat to evaporate from the body and clothes. In that downtime, you could get other emails and phone calls done. If you’re really lucky, the barista at the coffee shop won’t check the bathrooms before closing down for the night, and you’ll arrive at your morning meeting presentable and refreshed.

Speaking of bars and eating out, those habits change too, because…

Biking on a full stomach is excruciating.

Are you the kind of person who likes to order dessert? Or have one last beer before heading out? Do you help finish off that plate of fries for your calorie-conscious friend? All of these things are out of the question if you’re biking home. Getting on a bicycle with a full stomach ranks below childbirth and kidney stones on the pain index, but is still quite uncomfortable. For me at least, that discomfort was exacerbated by the fact that two of my favorite locales – Good Sports and Donny Dirk’s – are at the foot of Farview hill. Try biking up one of the steepest ascents in Minneapolis with a stomach full of pizza and beer. Better yet, don’t. It’s not recommended.

So you’re eating less when you go out. In theory, this should be great. In reality, when you get home…

I’ve read numerous studies that say exercise lowers your appetite, and after a life of pretty consistent physical activity I can only conclude that the scientists who conducted these studies are lethargic dweebs who don’t actually exercise. There has only been one time in my life where exercise decreased my appetite, and that was in high school football when the coach found chewing tobacco in the locker room and made everyone run sprints until we threw up.

Look, you never hear people say things like, “I drove my car so far that I don’t even need to gas up!” The body needs fuel if it’s getting you from place to place too. So after coming home from biking thirty miles in a day and having a beer and a burger (but not a second or third beer, and coleslaw instead of fries) your body is going to thank you for not biking home on a full stomach and then immediately demand that you fill said stomach with something substantial.

That’s going to be a problem, because…

Shopping is a pain in the kiester.

I never went out and bought a basket, or saddle bags, or a bike trailer. This meant that I could only bring home what I could fit in a backpack. Prior to taking up biking as my main form of transit, I had a system for shopping: Cut coupons, make a list, put the items on that list in the order I walk through the store to reduce impulse buying (I really do this), buy only from the list and come back for extra items on a second trip, and always eat before shopping, again to reduce impulse buys. Cumulatively, these habits can reduce a grocery bill by 30-40%.

I have not used my coupon book since I took up biking. Instead, I would plan out my cooking and shopping activities based on what I could bring home. I would stop by a grocery store on almost a daily basis. Shopping for a single meal meant planning out my trips to Cub Foods over the course of three days. Day 1: pick up cornmeal or ground casava for ugali, canned garbanzo beans and seasonings for a garnish. Day 2: lemons, parsley for the dinner, yogurt and granola for breakfast. Day 3: Swordfish and fresh veggies to sear on the grill. Also, do I have a grill? Because buying one of those while bicycling is going to be difficult.

Which brings me to another point. At some moment you are going to realize that you need to lean on your friend with a pickup truck to help you go grocery shopping. There are certain things–rice, dog food, Nutella, Cheez-Its, bat-themed accessories purchased by Morgan Freeman, etc.–that just make sense to buy in as large quantities as possible. For these transactions, you will need to call your obligatory Friend With A Pickup Truck and cash in your chips for a favor.

It’s a good thing your eating and shopping habits change drastically, because…

Your clothes are going to wear out.

I suppose this just makes sense. Your body is going to move a lot more than it did before. The points where that movement occurs are going to generate or receive friction, which by general laws of physics will wear out the material where this is occurring. I burned through far more socks than I expected, and speaking frankly, the crotchal regions of my clothes wore out surprisingly quickly. I wish I had a better reason for why that happened, but biking it is.

Now that’s not necessarily a bad thing. Prior to my season of biking, my pants and shorts fell into two categories: those that fit my size at the time of purchase, and those that were a size to small but bought out of vanity. After putting 1,500 miles on the road, it’s the former that no longer fit. I did drop 2-3 inches from my waistline by the time biking was all said and done.

How it affected me.

There are two final ways biking as a primary mode of transportation affected me. For those of you who noticed that my normally Herculean upper body didn’t seem to have the same sculpted form, but were too gracious to ask about this openly, here’s your answer. The closest gym to my home is 2.5 miles away. I averaged almost ten miles per day of biking, and another five-mile round trip was often not in the cards at the end of the day. While I was in much better shape by the end of the summer, I was often so glad to be home that I didn’t venture out after a day’s work was done. When the Anytime Fitness opens up around the corner from me, I expect to bike throughout next summer and be more regimented about weightlifting. But if you don’t live close to a gym, you can expect to work out less due to changes in how much time and energy you have.

Finally, I have deep reservations about paying someone else to do something that I personally can handle on my own. It’s why I took classes on window restoration, avoid valet parking, cook as many meals as I can, eschew barbershops except in the hairiest of circumstances, and under no circumstances will I take karate lessons. Every time I filled up a gas tank so I could drive somewhere, I began to think, “Why am I paying someone else to bring me from point A to point B? I could do this just fine on my own.”

That’s the kind of revelation I hope more people come to about bicycling in Minneapolis.

Photo (NOT of my stolen bike) by Jeff Skrenes