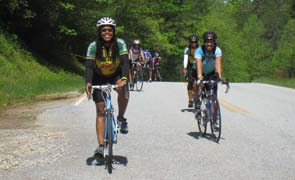 Saturday, August 23, presents a great opportunity to have an historical experience relative to the African American communities’ presence in Minneapolis and Saint Paul. Major Taylor Bicycling Club is offering its Second Annual Dark 2 Dawn: A Ride Through African American History.

The ride will begin at 9 pm on Saturday, August 23 at Martin Luther King Park and end with a celebratory breakfast at MLK Park. Throughout the night there will be stops at notable locations connected to the Black experience in the Twin Cities. Each location will feature a presenter that has a personal connection to that place, creating the human and historical connection. The ride at night is to commemorate the Underground Railroad and the importance to our communities’ fight for freedom.

Riding bikes raises awareness to the challenge’s that are being created in communities across the country as we fight for equity in transportation, healthcare and economic development. As bike lanes have become the pre-cursors to the displacement of gentrification in many peoples’ minds.

The notable locations begin at the Minnesota Spokesman Recorder offices. The MSR is celebrating 80 years in business and recently being added to the Minnesota historic registry and submission to the National Historical Registry. Hear the stories of the once thriving business district at 38th and 4th Avenues South.

The Lee home at 46th and Columbus, also headed to the National Registry and is featured in an art exhibit at the University of MN, is opening the same night as the ride. The ride will also include stops at Morrill Hall, where on January 14, 1969, a group of 70 students took over the offices of University of Minnesota administrators in Morrill Hall and refused to leave until a list of seven demands calling for Black culture’s recognition and recruitment on campus were met. The hosts at this stop include participant at the takeover.

The stops also include the Minnesota Historical Society and the newly renovated St. Paul Union Depot, as well as many other locations that show the breadth and depth of contributions past and yet to be made by Minnesota’s African American community. Refreshments will be provided throughout the night, followed by a bountiful breakfast buffet. Participants will also receive a limited edition Dark2Dawn shirt designed by Seitu Jones. Less than 75 people will be able to participate in this event. Those who are unable to ride but would still like to contribute, may register a contribution to support the Major Taylor Minnesota’s advocacy efforts.

Friends and family are welcome to join the ride through African American history.

Tickets are available for $25 at

This article was provided by the Major Taylor Bicycling Club.