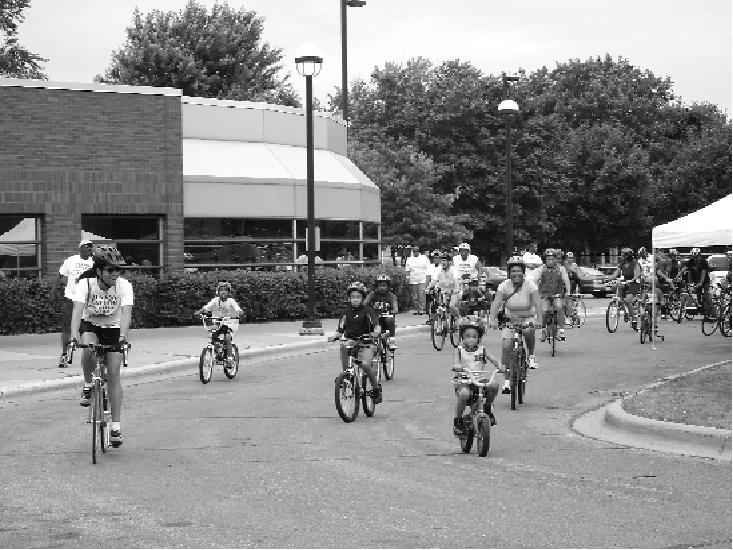 “Don’t get ahead of the leader,” they cautioned. That’s Dacia Durham, the leader, at left, as the Northside Glide Ride took off for Wirth Parkway from NorthPoint.

Dacia Durham is a star—along with other members of the Major Taylor Bicycling Club of Minnesota. Their photos are on bus stop signs and in ads for the “Bike. Walk. Move.” campaign.

They sponsored, with Cultural Wellness Center, a presentation in June by the author of a book about Major Taylor’s time racing in Australia; a time of huge popularity for the sport that was manipulated by its promoters. After a meteoric rise, underhanded competition essentially ended Taylor’s career, according to author Jim Fitzpatrick.

(More at majortaylorinaustralia.com and about his overall career on the club’s website, www.majortaylorminnesota.org) The Major Taylor Club organized the Northside Glide Ride July 9 (in photo) which gave biking tips and made free bike tune-ups available.

Nice Ride, the bicycle sharing program which expanded into North Minneapolis thanks to special funding sources, reports the station with most use in North is at 12th and Washington (close to downtown, where usage statistics are highest). The station with the least use in North is at North Commons Park. Nice Ride has had information tables at West Broadway Farmer’s Market and other events.

At a recent West Broadway Farmer’s Market, the guy with the megaphone hawking the market announced free on-site bike tune-ups through the Minneapolis Bike Walk Ambassadors. “We got a sista over here who can fix your bicycle! You don’t need a man to fix your bike.”

And Friday, July 22, the city contract, finally, was fully executed for the Venture North Bike Walk Center, “which means we are finally full speed ahead. We needed to have the contract before we could get the build-out started—so we are doing that now,” reports Marilu Thomas, Executive Director of Redeemer Center for Life, which will open Venture North at 1830 Glenwood Ave. N.

“We finished the Bike Fests where our junior mechanics did tune ups at five locations in North Minneapolis. We are also training the youth interns who will be working in the shop and in programming—part of our ‘cascading’ mentoring starting with older youth who will work with younger youth,” Thomas said.

The center will have its grand opening Oct. 22. The youth “will also be at the Urban League Family Day on Aug. 27 from noon to 8 p.m. to promote Venture North Bike Walk Center, do some basic fix-it on bikes, and hand out information. We are accepting bike donations—call 612-377-4476 for more information,” Thomas added.