Two cyclists’ diverging opinions about the system of bike lanes in Minneapolis exemplify the varying opinions that go with the variety of bike lanes. Minneapolis is home to nine distinct varieties of on-road bicycle routes, not including off-road cycling paths, such as the Greenway. Not only are there many kinds of bike lanes: cyclists legally can ride on all roads in Minnesota, except on limited access highways where bikes are specifically prohibited, and they can ride two abreast.  State law requires that bicyclists ride as close as practical to the right side of the road except when passing, making left turns, and to avoid obstacles.  This law means that cyclists can ride in the same lane as cars if that is the safest place to be or in order to ride side-by-side.

Editor’s note: Yes, this is one more story that focuses on the bigger city west of the Mississippi, and almost ignores St. Paul — but there’s a good reason. Jump down to the end of the article to find out why.

With such a complex subject, I found equally complicated opinions. Five Minneapolis cyclists had opinions on every variety of bike lane, and even those that hated bike lanes found something to love.

Bike routes come in two general types:  those only for bikes and those cars also can drive on.

Two solid white lines with a bicycle symbol between them designate a bike lane. In Minneapolis, bike lanes usually are on the right side of the street, but sometimes show up on the left side on one-ways. They are on the traffic side of parked cars. Cars cannot drive on bike lanes, cycle tracks, or buffered bike lanes except to park or make a turn. 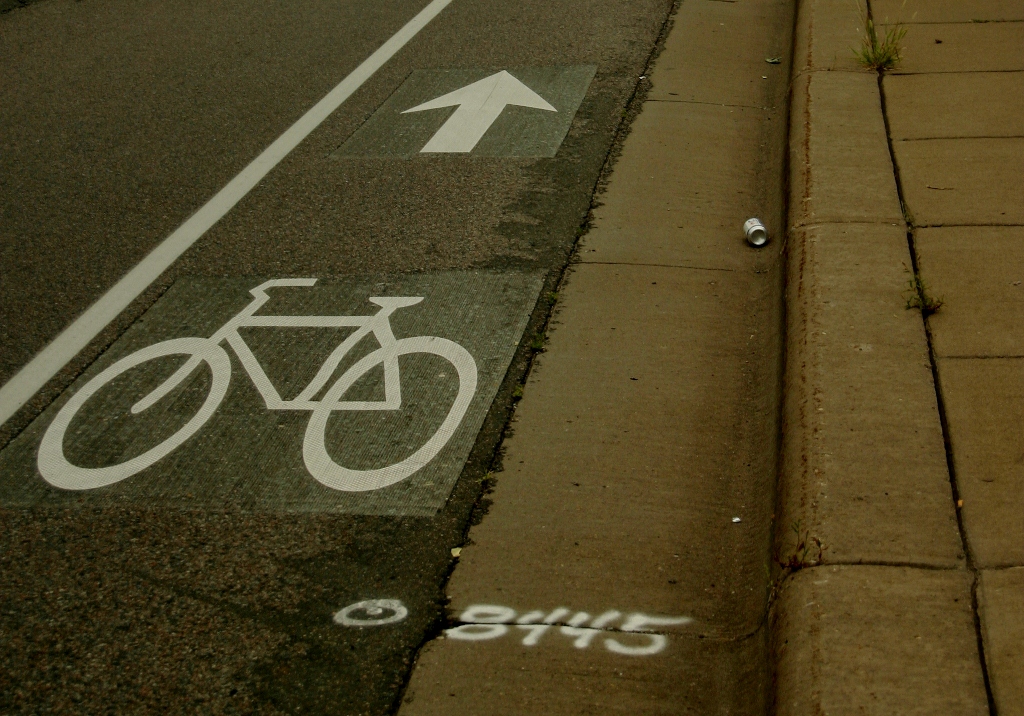 Sue Schroeder is a year-round bicycle commuter. She said she loves that there are more bicycle lanes because, “They offer a relatively designated space and show there is another option [to driving a car].”

Eric Joas has ridden his bike as his primary transportation in Minneapolis for 12 years. He says, “Bike lanes push you off to the side so you’re less visible so cars making turns do not see cyclists.

“I’ve done it too when I had a van,” he said. Joas said one day a couple years ago, he was driving during rush hour. A line of cars stretched out behind him, and looking in his mirror he did not see a biker approaching on his right, moving fast The biker just started to pass as Eric started to turn right. “I almost took him out,” said Joas. 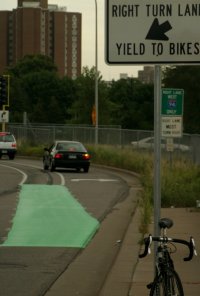 Some bike lanes turn into a broad green stripe in areas where cars merge or turn across a bike lane. They alert motorists to yield to cyclists when making their turn, and tell bikers they should be on the lookout for cars crossing their path.

At right: a green bike lane —

Erin Smithson moved to Minneapolis from Boston just a month ago, but has been cycling around the city ever since. I explained to her what a green bike lane means, and she said, “How would you know that?” With such a variety of bike route markings, what they mean may not be intuitive.

Here’s a guide to bike lane basics — what the markings mean. The city of Minneapolis publishes an online guide, complete with videos.

A buffered lane is a bike lane with a third line and chevrons separating the bike line from car traffic. 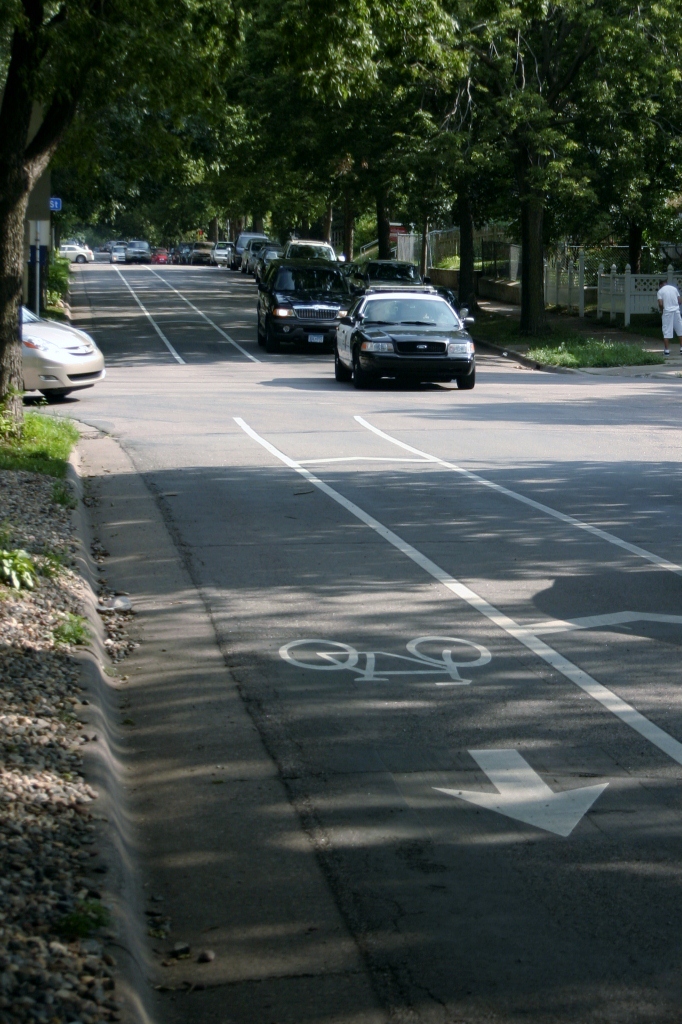 Joas had a low opinion of most bike lanes, but did say that buffer zone lanes are nice.

A cycle track is just like a buffer lane, but next to the curb, with cars parking on the traffic side of the cycle track. 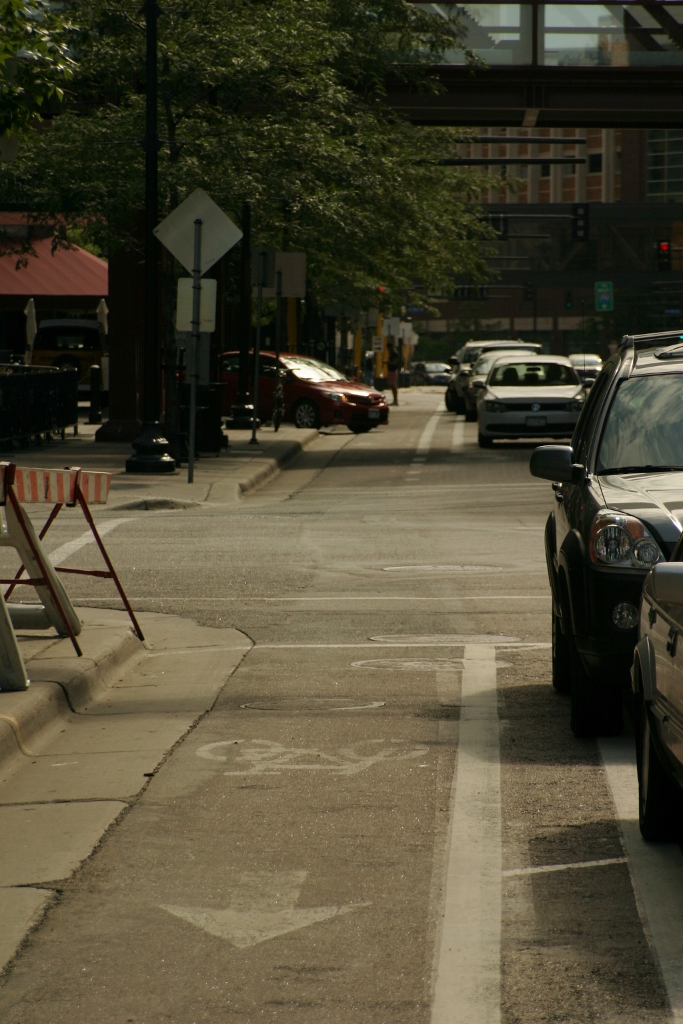 The cycle track on 1st Avenue downtown. Two cars are parked between the bike lane and the auto traffic lanes. (Photos by Eric Blom)

Andy Janus is a barista at One-on-One bicycle studio and rides on the cycle track on 1st Avenue downtown. “It’s not worth it,” he said, “You’re stuck going like 10 miles per hour. I’m just as threatened by drunk pedestrians [as by cars] on 1st Avenue.”

Several markings indicate street-space that cars and bikes share. They often show cyclists the safest part of the road to ride on but remind motorists to watch out for cyclists.

A bicycle symbol with chevrons designates a shared bike lane. 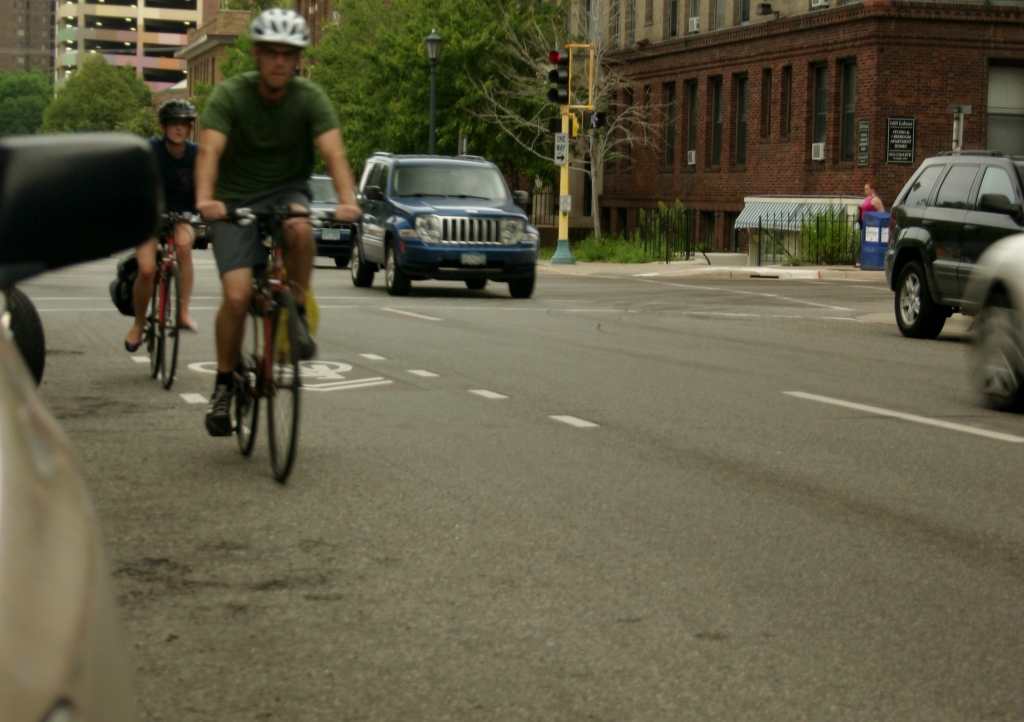 Janus says he is in favor of markings that puts cyclists in the middle of the street, as shared lanes do, because he thinks bikes are more visible that way. “I think that’s way safer,” he said.

Green shared lanes look like a broad green stripe down the road with a white bike symbol and chevrons on it. 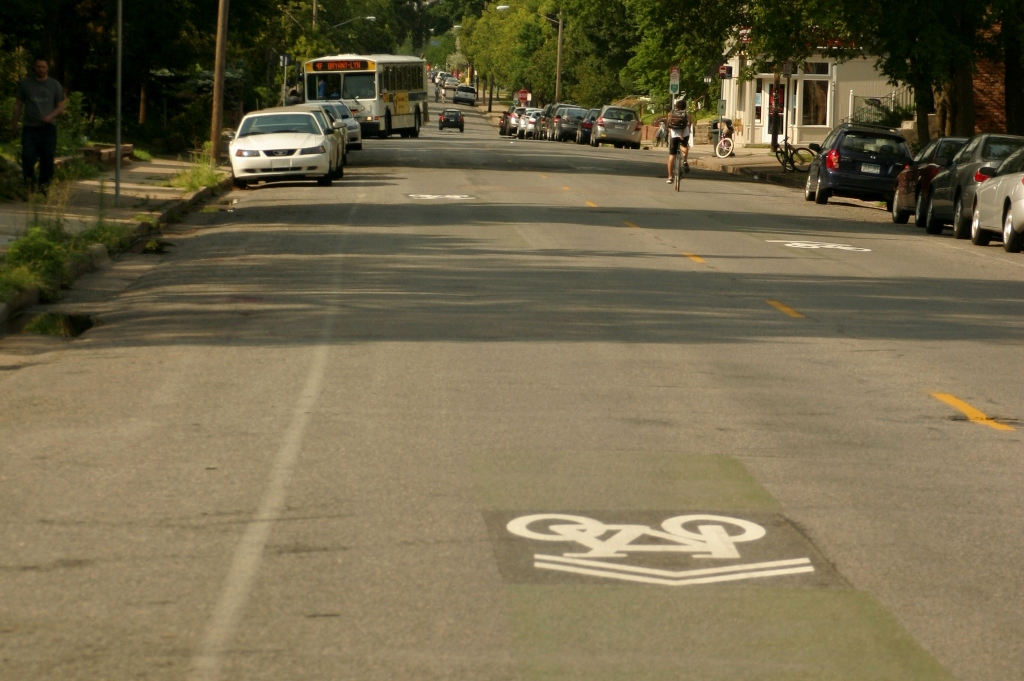 Cyclists told me they used Bryant Avenue South heavily even before it got the green shared lane markings. (Photos by Eric Blom)

If a bike lane has a dashed line on the traffic side, it is a shared lane, and motorists can use it when cyclists are not there. 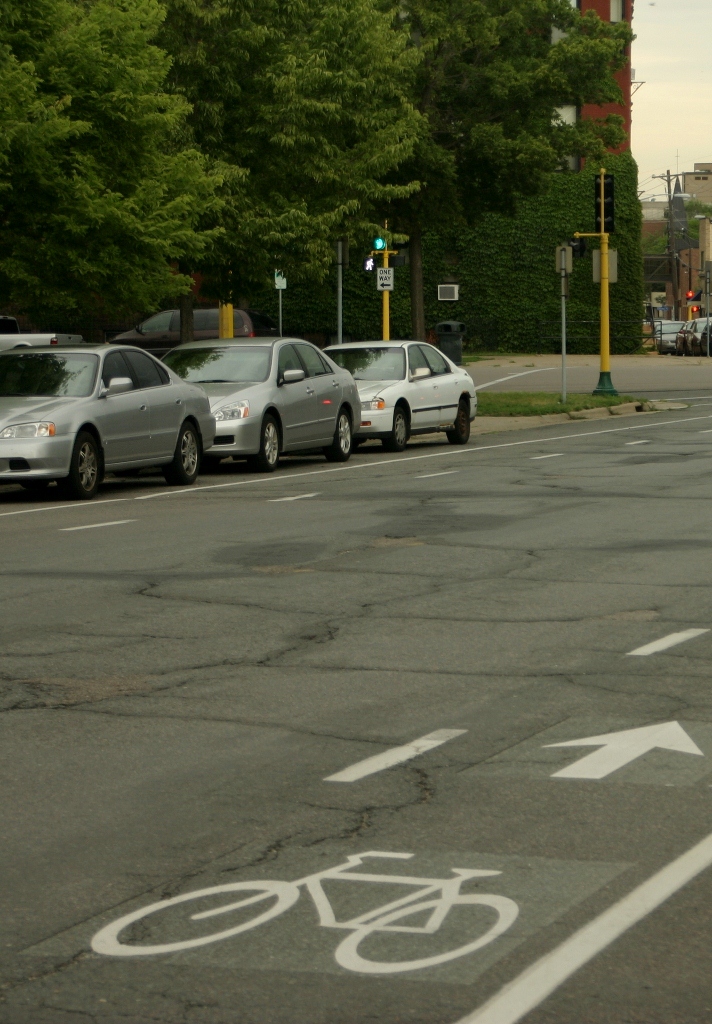 Originally from Minneapolis, Kellie Kildahl just moved back from Boston. Kildahl was an avid biker in Boston, and continues to bike for transportation since she moved back to town. She thinks there is value to all of the bicycle markings. “Where ever there’s a giant picture of a bike anywhere, that’s a giant welcome sign, and it reminds cars to check their mirrors,” she said. 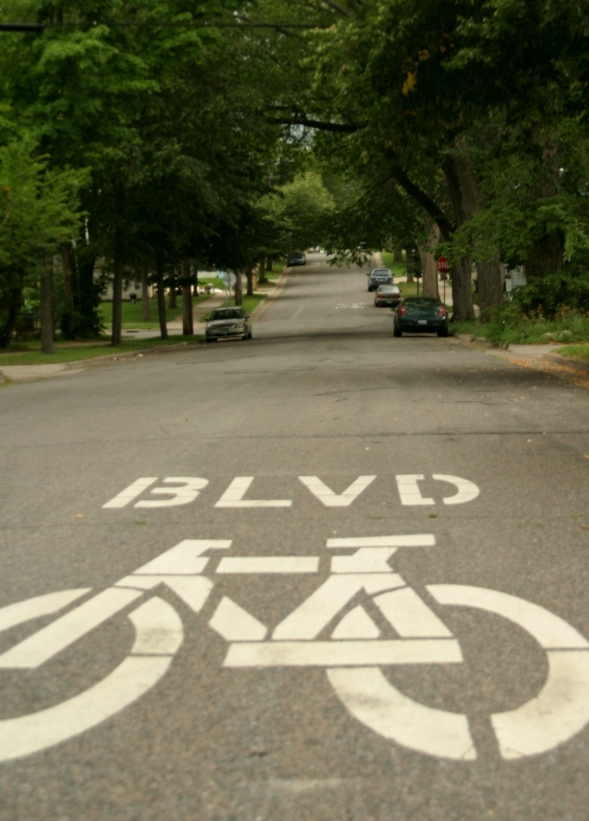 Janus said he likes to bike on side streets anyway, and likes the idea of bike boulevards but wishes there were crosswalks or lights to help cyclists on bike boulevards to cross busy streets.

Bike boxes are special markings at intersections of streets with bike lanes. They make a space just for bikes in front where cars must stop. These boxes make it easier for cyclists to change lanes at red lights and to make turns when the light changes. 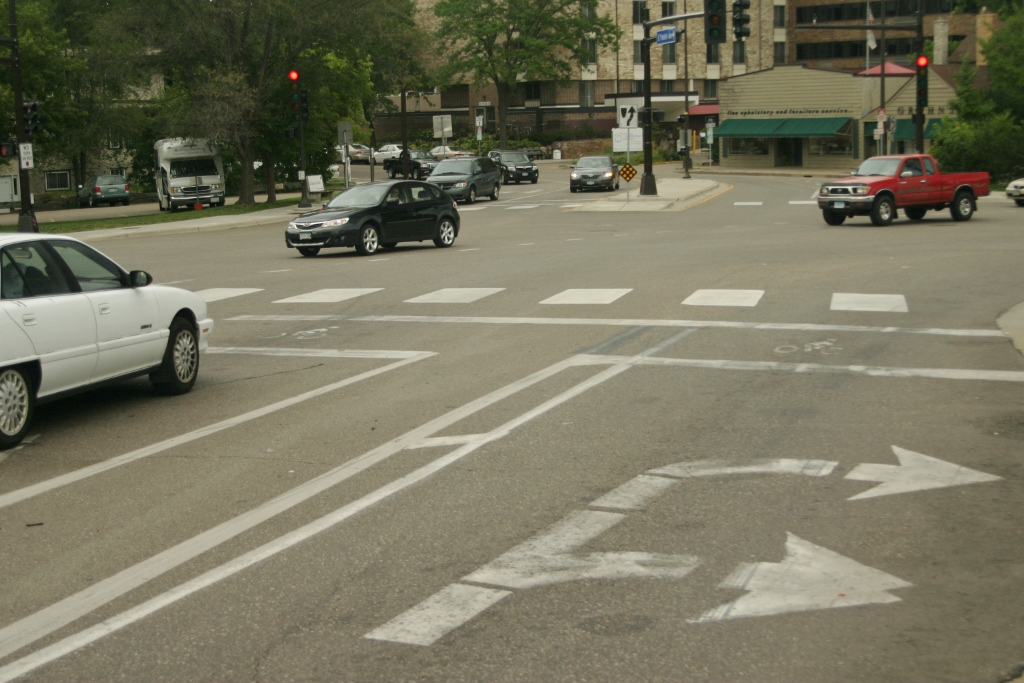 A car stops before the bike box that extends the width of Franklin Avenue at Five Corners, helping cyclists to turn right and left. (Photos by Eric Blom)

Bike boxes are not common in Minneapolis, and no one I talked to spoke of using one. Four of the five I talked to did say, however, that they prefer to use off-street bike paths than any of the on-street routes.

Unlike Minneapolis, St. Paul has only bike lanes and off-street bike paths but not other kinds of on-street bicycle routes. St. Paul doesn’t have bike boulevards either.

We invite readers to add their thoughts in the comments. Do you prefer certain kinds of on-street routes? Are the markings easy to understand? And what about all you bikers over in St. Paul — what do you think of the variety of bike lanes in Minneapolis? Do you think St. Paul should move in the same direction or not? Which city is do you prefer to bike in?