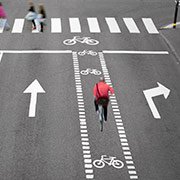 It’s urbanist dogma that you can build a city for either cars or people, but not both. Now there’s evidence to question that dualistic assumption.

In America’s busiest, most crowded city, New York, introduction of buffered bicycle lanes on the teeming streets has sparked a backlash from motorists similar to the one that doomed former Mayor Michael Bloomberg’s proposal for congestion vehicle pricing on Manhattan Island. But a funny thing happened on the way to gridlock when the city made room for bikes on some major Manhattan avenues: Auto traffic speeded up.

Huh? According to Eric Jaffe at the Atlantic CITYLAB, narrower driving lanes on Columbus Avenue and narrower and one fewer of them on Eighth Avenue brought significantly shorter travel times for motorists even though traffic volumes “remained pretty consistent.” On First Avenue, meanwhile, a more radical reduction of five car travel lanes to just three plus a bus lane resulted in a 1 mile per hour decrease in taxi speed but a 160 percent increase in bicycle traffic—meaning “an overall rise in mobility.”

It took some smart street design to achieve these counterintuitive outcomes, especially the addition of left-turn pockets in areas otherwise reserved for parking and bike buffer strips along the one-way avenues. Before, Jaffe notes, “cars turned left from a general traffic lane; [now] traffic doesn’t have to slow down until the left turn is completed and … drivers have an easier time seeing bike riders coming up beside them.”

According to a city report, injuries to drivers, bicyclists and pedestrians have all declined since the changes were made on segments of seven major avenues. On top of that, retail sales showed greater increases after bike lane projects than in other areas. The work also added trees to the cityscape and shortened pedestrian street crossings.

Bike lanes still stir autocentric outrage, however. In the New York boroughs of Brooklyn and Staten Island, the city has even removed some of them after protests, and a lawsuit remained pending over lanes at Brooklyn’s Prospect Park West, Tim Henderson reported at Stateline earlier in the summer. “What should be a balancing of community interests has turned into something of an ideological battle,” Alexandria, Va., law professor Frank Buckley told Henderson.

It doesn’t have to be like that, though. As NYC’s smart design shows, there may be ways to serve all the warring modes of mobility, even in finite right-of-way.