If the bright green bike lanes and Nice Ride stations weren’t evidence enough, Shaun Murphy is living proof that promoting bicycling is a high priority for the City of Minneapolis.

Murphy started working as the city’s first-ever bicycle and pedestrian coordinator in December after some criticism that the position was unnecessary in the face of the city’s tight budget.

He will oversee the implementation of the city’s pedestrian and bicycle master plans, which detail the city’s goals for promoting bicycling and walking as safe and effective ways to travel within the city. He’ll also work with various city departments collecting data and improving the safety, accessibility and effectiveness of bicycle and pedestrian infrastructure.

For the past four years, Murphy has coordinated the Nonmotorized Transportation Pilot Program, a program from a $25 million federal grant to improve pedestrian and bike infrastructure in Minneapolis.

Murphy said more people are biking than ever in the city, and he expects his hands will be full with the new position.

On Tuesday, the city released its first ever Bicycling Account, which showed the number of bicyclists in the city increased 47 percent from 2007 to 2011 with a 25 percent increase in the past year alone. 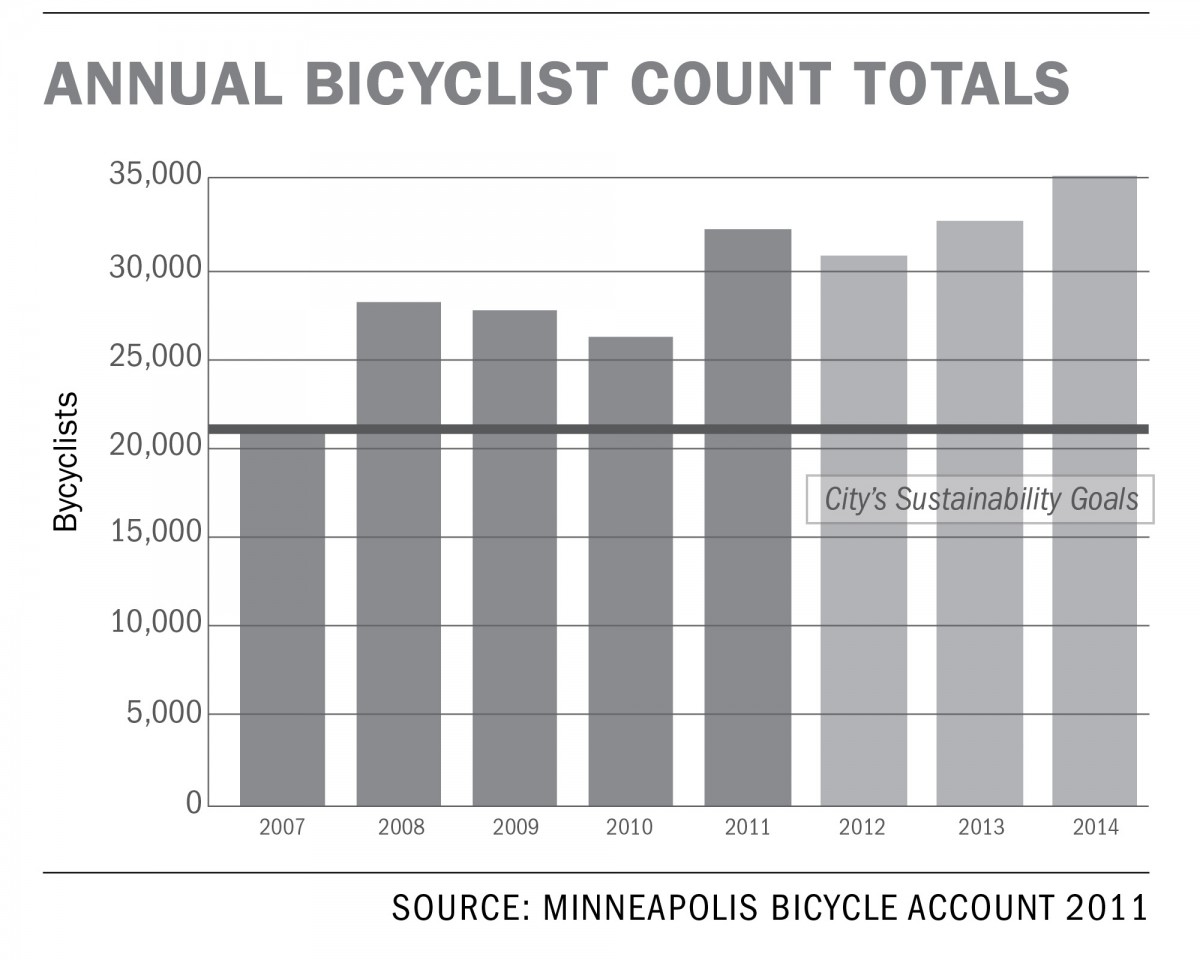 Murphy attributed that decline to added bike and pedestrian infrastructure throughout the city.

“All of these projects and improvements raise the visibility of bicycling and walking as legitimate modes of travel,” Murphy said.

According to the report, the city increased on-street bike lanes by 35 miles in 2011 — bringing Minneapolis’ total to 167 miles.

The city also completed several large projects in 2011, like the Northeast Minneapolis Bikeways and the University of Minnesota Bike Center.

The top three most heavily-biked locations in the state are in the University area, according to the report. More than 6,800 bikes cross the Washington Avenue Bridge every day, while 3,810 ride past the intersection of University Avenue and 15th Avenue Southeast. Another 3,570 bikers ride across 15th Avenue and Fifth Street Southeast daily.

“The University is unique because it is the only place in the city where there are queues of bikes at stoplights,” Murphy said.

He said the University will play an important role in future projects, like the long-delayed University bikeway which is expected to be completed by this fall. The bikeway will run from the Northern Pacific Bridge No. 9, a pedestrian bridge connecting the East and West Banks, to Oak Street near TCF Bank Stadium.

Although the creation of the position received overwhelming City Council support, there was some controversy as opponents saw it as unnecessary, especially at a time when several firefighters were being laid off.

Mark Lakosky, president of the firefighters union, said bicycle safety is important but that he didn’t understand how the city was able to fund the new position.

“It’s funny every year [Mayor R.T.] Rybak is saying the city is broke, yet he’s constantly developing new programs and duplicating services,” Lakosky said. “Here’s my prediction: if Mayor Rybak runs again, by the end of four years into his next term, there will about five people in that bike coordinator department.”

City Councilman Cam Gordon said he thought it was unfortunate that people saw the creation of Murphy’s position and the firefighter layoffs as linked.

“The funds for the bicycle coordinator didn’t come from the fire department,” Gordon said. “The city planned to create the coordinator position for quite some time; it just happened that the firefighter layoffs came up at the same time.”

Murphy hasn’t heard much about the controversy since starting but said he does feel some pressure to prove the position is valuable to the city.

Gordon echoed Murphy, saying the position is not created with new dollars and will save the city money.

“It’s incredibly important that we better coordinate how we spend our scarce resources,” Gordon said. “I have a lot of respect for Shaun and trust that he’ll seize opportunities to build projects in the most efficient way.”