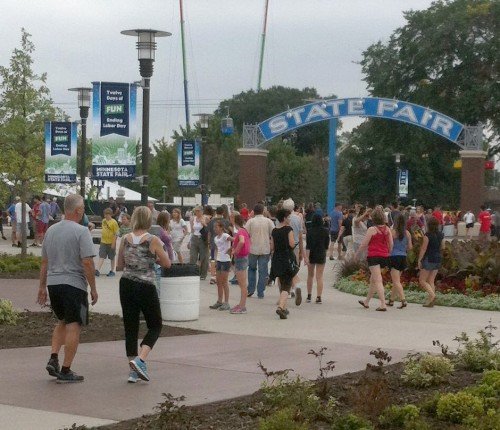 If you want to see the biggest transit show in Minnesota, or anywhere between Chicago and the West Coast for that matter, hop a bus to the new State Fair bus terminal between now and Labor Day. Almost half of fairgoers arrive by bus, and those are now concentrated on the northwest side of the fair grounds. In addition to the new entry gate that replaced Heritage Square (see above), the terminal itself is just temporary fencing and lines painted on the asphalt of the big parking lot that serves the U of M’s St. Paul Campus most of the year. Built on the cheap, the loading and layover areas will need improvement because the buses are crushing the thin asphalt. Even so, it’s a big improvement on the facilities it replaced.

There are two very large bus loops, one for the suburban express buses and Metro Transit’s Route 960 to downtown Minneapolis, the other for the free shuttles to park-ride lots from the U of M, St. Paul and Roseville. Each destination has a well-marked loading area. Where you get off is the same spot that you get on. The terminal replaces two terminals on the south side of Como Avenue and accommodates quite a few of the shuttle buses that formerly stopped along Midway Parkway just east of Snelling Avenue. Within the two loops is space to stage buses that aren’t scheduled to leave immediately.

The new location is one block beyond the east end of the U of M’s intercampus busway, and that’s the key to its success. No longer do buses and their passengers clog Como Avenue. Pretty much every bus uses the busway to at least Highway 280, thereby avoiding the congestion near the fair. The sheer volume of buses and passengers is something to see. A constant stream of them pours in and out.

Metro Transit views the fair service as a marketing tool, introducing people to transit who would otherwise avoid it. One can debate whether the experience translates into more non-fair ridership, but there’s no question it has changed transportation to the fair. 30 years ago almost everyone drove. The change didn’t happen by accident. The State Fair realized that the only way to grow was through transit, not the automobile. Instead of building parking amps, the fair proceeded to subsidize more and more shuttles to nearby lots. For its part, Metro Transit created suburban park-ride expresses to the fair in the 1990s. They were an outgrowth of the similar, successful expresses to the Super Bowl and the World Series.

This is a real transit success story. Check it out.