The Minnesota Republican Party, which condemned Whitley’s remarks las week, has not yet responded to questions about whether Whitley will keep his postion as the chairman of the county GOP. [end update]

Jennifer Brooks picked up the developing story at the Star Tribune, interviewing Whitley, who doubled down. The Associated Press picked up the tale in a news item picked up nationally and Raw Story and other national blogs.

People in Big Stone County are also speaking up about the matter.

Via the Ortonville Hardware Facebook page, Whitley’s employers respond to misplaced calls to boycott their business while disowning the bigotry itself:

It is with regret and shock that we feel we must address the comments that one of our employees made last week. While we support every American’s right to free speech, we certainly cannot condone the inflammatory remarks against Muslims and others. This is NOT a view we share and we are saddened to know that this has become such a horrible reflection on Big Stone County, our community, and our business.

I’m not sure when it became the norm for one individual with flawed thinking to become the spokesperson for an entire area. How is it OK for his words to be dumped on all of us as our collective belief? This is so far from the truth it is amazing to think that it is even considered that we all feel the same.

We have already felt the ramifications of this individuals actions and it’s been suggested both locally and statewide on the MPR website that our business should be boycotted as long as he works there. We have also felt the love and support from the people and other businesses when we were in town over the weekend and we thank you for that.

Let’s be clear. At no time were we aware of this person’s views. At no time were these views expressed within our presence and had they been, we would have dealt with it immediately. Having said that, it is clear that this person has brought shame to us personally, to our business, our community, our county and the Republican Party. His actions must be addressed and for our part we will definitely do so. We will not tolerate this type of bigotry within our business family.

We have always tried to be inclusive when dealing with the public. Everyone is welcome n our stores and will be treated with respect and common courtesy. If that has not been the case, please let us know.

As we enter the holiday season, let’s take this opportunity to extend a hand to others – of all races, religions, and ethnic backgrounds. Let’s show the state and the world that we are better than this one individual and his flawed thinking. Let’s show them who the people of this area REALLY are!

If you are inclined, like the page and share your support with the owners. The post has gotten dozens of likes and many supportive comments, although one commenter sides with Whitley (and two readers like that comment). Bluestem suspect that’s the ratio of opinion in Big Stone County, with most of those who’ve learned of Whitley’s call to murder people on the basis of their religion being horrified by the ignorance and hatred.

I have genealogical proof that my family have been peasants for over five hundred years. I think that enables me to claim pretty solidly that I have a handle on “Rural Values” and I confess, I don’t see much that I recognize in these comments. I’m shocked, appalled, and saddened beyond all measure that these comments came from Big Stone County.

On the Big Stone County DFL has posted a letter to the editor of the Ortonville Independent on its own Facebook page:

Big Stone County DFL’s Affirmative Action Officer, Gordon Lindquist’s response to the Jack Whitley-Republican hate speech story is below. If you stand against the divisive attitudes that Whitley’s comments represent, you might be a DFL’er. You can help build our positive coalition in Big Stone County by contacting us at BigStoneDFL[at]gmail.com.

The Big Stone County Republican Chair has put our county in the news and for the wrong reason.

Jack Whitley, the Big Stone Republican Party Chair said in a Facebook post that all Muslims are “parasites.” He went on to say that waterboarding them would be a “waste of resources” and that we should “frag ‘em,” which means to launch grenades at them. This has received state and national attention. The Star Tribune, Minnesota Public Radio and other publications have carried this story the last few days. An internet search will take you to sites to read about them firsthand.

I don’t care who you are, or what political party you are from – those comments are dangerous and racist. They give all of us a bad name! Sure, everyone has the First Amendment right to say something stupid, but we do not expect such commentary from people in apparent positions of leadership in our community.

That’s why I hope our recently elected representative Jeff Backer will show some leadership of his own and request that Jack Whitley step down as chair of the Big Stone Republican Party. As our representative in the legislature, Backer should clearly and publicly denounce this kind of racist talk from within the Republican Party because it has no place in any of our politics. Backer’s silence on his matter would speak volumes…….we are listening.

It’s a point well taken. Whitley has deleted his Facebook page, and so his online interactions with representative-elect Jeff Backer no longer show up on Backer’s page, but record of their discussions still exist.

As we noted on November 15 in MN12A: Jeff Backer’s backers troll new representative about Emmer COS, priorities, Whitley and Backer discussed “repairing” the supposed damage done by “immoral” laws. And yes, we saved a screenshot: 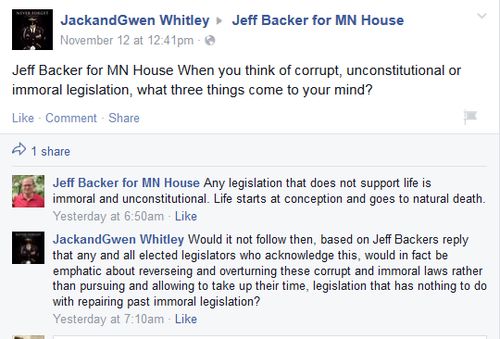 Photos: Big Stone National Wildlife Refuge, near Ortonville. Bluestem hopes that more Minnesotans will visit the county in Minnesota’s hauntingly beautiful western headwaters. Both the Minnesota River and the Red River of the North begin on the state’s western border. We love the area so much that we use this shot as the cover photo for Bluestem’s Facebook page. (above); screenshot from Jeff Backer’s campaign website (middle); News item from the Northern Star (below).