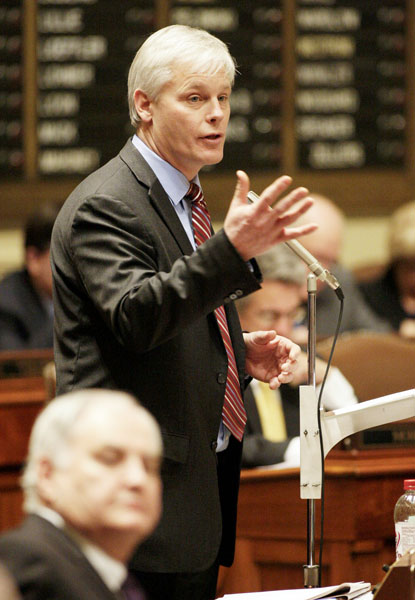 “If you free up the entrepreneurs, the hard-working women and men of our great state, they’ll build an economy that is sustainable, and we’ll lead the recovery instead of waiting for it to come here,” Zellers said.

“Reform 2.0” includes dozens of individual proposals, many of them hatched during face-to-face meetings with business owners. Zellers said he’s hoping that at least some of those ideas are well received by the governor and the DFLers.

“We are going to work with the governor; we’ve proven we can work with him on a number of reform initiatives,” Zellers said.

“I think you’ll see Democrats embracing good ideas about how to make government work better — as long as it’s about that,” he said.

A year for compromise?

The other big issue hanging over lawmakers this year, according to proponents, is also a potential job creator: funding for a new Vikings stadium.

Dayton is an adamant supporter of a new stadium, arguing it will employ thousands of construction workers, and both Zellers and Thissen say they think a plan to build a new stadium should come up for a vote on the House floor this year. Everyone agrees the clock is ticking.

The problem, right now, seems to be the absence of a clear proposal for lawmakers to even consider.

“This has to be a good deal on location, it has to be a really good deal on financing … it also has to be good infrastructure,” Zellers said. “Nothing precludes it from happening, but I think a lot of those things need to gel together really quickly.”

Thissen said he’s not sure how a vote would pan out on a stadium bill. He said there will likely be some DFLers who would support it and others who reject it.
“Whether it goes up or down, I don’t have the answer to that right now. But it’s something that people are clearly interested in. There are good arguments on both sides of the issue,” Thissen said.

Issues like the Vikings stadium, bonding and certain government reform initiatives might find some bipartisan support this year, but the goodwill between the two parties could be fragile.

One issue likely to divide the House along party lines this year is legislation regarding a proposed constitutional amendment requiring voters to show a photo identification. Last year, a bill to require photo ID passed the House and Senate largely along party lines, only to be vetoed by Dayton. A bill for a constitutional amendment would allow Republicans to circumvent the governor and put the issue directly to the voters.

The issue is deeply unpopular with DFLers, but Zellers said it’s been thoroughly vetted and is overwhelmingly supported by Minnesotans.

“That’s something that the voters should really decide,” Zellers said.

“None of these constitutional amendments that have been proposed are going to put anybody back to work. None of them are going to improve our economy in any way, so it doesn’t make any sense from my perspective to spend any time on them at all,” Thissen said.