Minnesota might not attract fancy opening night premiers for many Hollywood blockbusters, but when you want to debut a national documentary about co-ops, where better than the Land O’ Lakes?

Sunday night, about half a dozen Minnesota-based food cooperatives will take center stage for the U.S. premier of Food for Change, a nationally focused picture about the growth, expansion and economic success of these enterprises.

Each of the local food co-ops featured have growth and success stories to tell, says Kari Binning, marketing and media manager for the Mississippi Market co-op, which has expanded from its Selby Avenue home base to a second market at 1500 W. 7th St. in St. Paul.

Conveniently, Mississippi Market seized the opportunity to link its annual membership meeting to the film’s premier, said Binning, which will run at 7 p.m. Sunday at the Fitzgerald Theater in downtown St. Paul. 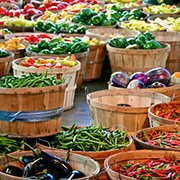 Dan Nordley, an executive at Triangle Park Creative in Minneapolis that publishes the national Cooperative Grocer magazine, said in a website posting the film points out historical significance of food co-ops along two paths.

First, they were instrumental in bringing consumers behind the organic food industry; second, the film shows how food co-ops strengthen communities where they are located.

Nordley is an active member of the Seward co-op in South Minneapolis that has expanded and grown while the community it serves goes through demographic change with new Minnesotans originally from East Africa.

These food co-op experiences are examples of Minnesota cooperative developments that will also be examined at a day-long November 8 conference, Cooperatives = Community Development. CoMinnesota and supporting cooperatives are hosting the conference at Thrivent Financial’s Minneapolis headquarters. Thrivent, the nation’s largest mutual benefit society with $75 billion in assets, is recognized internationally as a co-op although member-owned mutuals and credit union are incorporated under different U.S. legal codes.

“Minnesota and Wisconsin are the two biggest users of cooperative business models,” said Kevin Edberg, executive director of the multi-state Cooperative Development Services organization based in St. Paul and a co-director of CoMinnesota.

Minnesota has the largest number of co-op enterprises incorporated in a U.S. state. Wisconsin’s per capita financial use of cooperative enterprises is greater, Edberg said, citing University of Wisconsin’s Center for Cooperatives research.

Building from that platform, Edberg said the conference would explore areas where more cooperative development can help Minnesota grow while helping build a more sustainable economy.

Informal luncheon table talks focus on building a co-op base for the future. Elena Gaarder of Nexus Community Partners will discuss how the development community can support worker co-ops, Rudy Levine from CoFED (Cooperative Food and Empowerment Directive) will discuss engaging youth in co-op development, and John Flory and Yolanda Cotteral from Latino Economic Development Center will discuss development in Latino communities around Minnesota.

Leslie Watson, of Northeast Investment Cooperative, and Flory from LEDC, will discuss community wealth building; and Flory will join Pakou Hang, from Hmong American Farmers Association, in a discussion of co-ops in immigrant communities.

It’s a powerful set of events that will reinforce what Minnesotans are suited to do well and how we can used this advantage to grow an economy that will help move all Minnesotans forward.